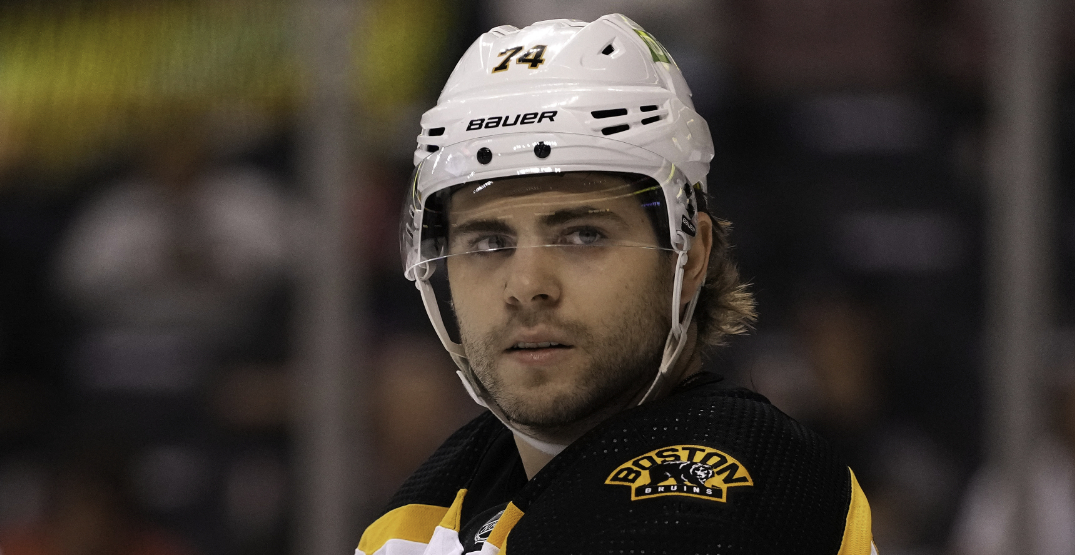 Jake DeBrusk is on the trade block.

At his own request, too.

DeBrusk, who’s in the midst of a second struggling season with the Boston Bruins, has reportedly requested a trade and already has over half a dozen suitors.

He was a healthy scratch Sunday.

“Regardless of the situation, Jake has certainly made it known he would prefer a new opportunity,” general manager Don Sweeney told reporters Tuesday.

“He’s shown a lot of maturity in trying to handle this as appropriately as possible… I’m not overly surprised this eventually came out. I’ve been in the know for this for quite some time and we’ve been trying to look at hockey trade situations that would help the Boston Bruins as I do my job and accommodate with what Jake thinks is best.”

The production hasn’t been there, though.

DeBrusk, in the second season of a two-year, $7.35 million contract with an average annual value of $3.675 million, has 20 points (8G, 12A) in 58 games since the signing extension. He’s being paid $4.85 million in real bucks this season, and has totalled three goals and six points in 17 games this year.

He’s struggling. He’s on the block. He’s been linked to the Edmonton Oilers.

But does he make sense?

He hasn’t been a driver

It’s not that DeBrusk, a product of Edmonton, Alberta, has been slumping of late. It’s more that his production has been trending downward since his 42-point season (27G, 15A) in 2018-19.

“At times, players get to a situation where they don’t feel they’re playing their best hockey, and I think Jake would openly admit he hasn’t played his best hockey,” Sweeney said. “Sometimes, players just look and say, ‘Maybe it’s cleaner if I tried to do that somewhere else,’ and that’s probably where this has gotten to.

“Responsibility is shared in that regard.”

It’s not necessarily a case of bad puck luck, either.

DeBrusk is shooting at an 8.6% clip this season, just slightly down from his career average of 11.9%. That’d account for an extra goal on his 35 pellets this season.

He shot at a career-high 17.3% en route to his NHL career-high 27 goals three seasons ago.

Jake DeBrusk, asking for a trade is a middle-six shot-first forward who's seen his finishing, production, and ice time plummet in the past two seasons. A fresh start would probably be a good idea for all involved. #NHLBruins pic.twitter.com/cNjzXfFavo

DeBrusk’s utilization has changed significantly, too. His offensive zone starts at 5-on-5 and has decreased ever since his rookie season, from 70.0% to a paltry 42.9% so far this year. Since the start of the 2020-21 season, DeBrusk sits at 12th among Bruins forwards with a 50.5 shot attempt percentage.

A change of scenery will almost certainly boost each of the above after a trade, at least in the short-term, but the inconsistent forward is showing some troubling trends.

The Oilers aren’t ripe with cap space at the moment. Edmonton has just over $1 million in room available, according to CapFriendly, with some injury trouble plaguing the defence specifically.

If there are significant trade talks between the two clubs, there’s obviously the option of having Boston retain salary or take a contract back in the deal to help level off the dollars-in, dollars-out aspect, but with an upwards of eight teams involved in discussions, the luxury of dictating terms falls more on Boston’s end.

As it stands, the Oilers have almost $46 million tied up in 14 forwards.

Adding a top-six winger — albeit a talented one — who is a pending restricted free agent with arbitration rights might be the least of Edmonton’s concerns.

The team boasts the top two scorers in the league, and depth among the top-six — where DeBrusk would immediately slot in — is already a strength of the organization. He won’t unseat wingers Zach Hyman and Ryan Nugent-Hopkins, and Jesse Puljujarvi has emerged as a player deserving of a significantly expanded role. Kailer Yamamoto remains a wild card, too.

While a summer swap prior to Hyman’s arrival might’ve made more sense, a December deal isn’t as likely.

DeBrusk is a first-round pick from the 2015 NHL Draft that is two seasons removed from a 24-goal pace and three seasons from his career year. There are at least eight teams bidding on his services.

Spoke with Rick Valette today, agent for Jake DeBrusk, he confirmed he asked for a trade over the weekend. It's felt a change of scenery moving forward would be beneficial. Debrusk will remain with the team while the Bruins try and facilitate the request.

Despite the trade request, there’s no rush for Boston to move him too — especially considering some of the issues the Bruins are themselves facing with a three-game suspension to Brad Marchand, an injury to forward Anton Blidh, a COVID outbreak in the American Hockey League’s Providence Bruins, and potential complications from Bruins coach Bruce Cassidy entering COVID-19 protocol.

In a situation where a trade request has been presented, Boston remains in the driver’s seat.

The projected cost, and overall gamble, doesn’t seem to quite fit in Edmonton.