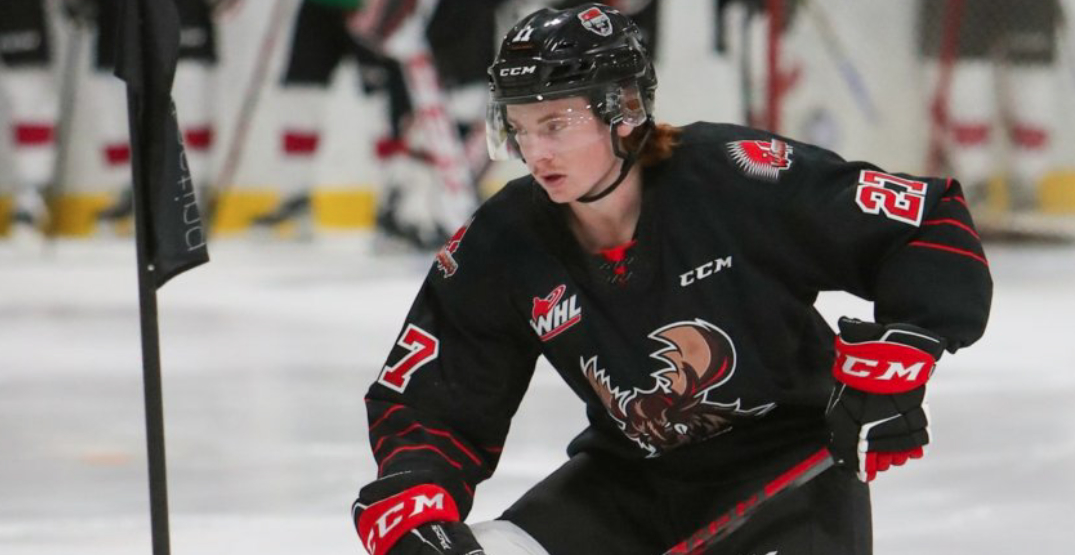 The Edmonton Oilers managed to register their best performance since their run to the Stanley Cup Final in 2006 and it didn’t come at the expense of their first-round pick in the 2022 NHL Draft.

On Thursday, they’ll reap the benefit of not flipping their first-rounder at the NHL Trade Deadline a few months back.

Because though they’ll be picking late in the first round –the 29-hole to be exact — the Oilers have the chance of drafting a prospect who can turn into a blue-chipper and bolster a prospect pool that already boasts the likes of Dylan Holloway, Philip Broberg, Carter Savoie, Raphael Lavoie, and Xavier Bourgault.

Here is a list of five candidates the Oilers could nab at No. 25 in the 2022 NHL Draft:

Jagger Firkus, named player of the game for Team White at the CHL/NHL Top Prospects Game in February, paced the Moose Jaw Warriors in scoring in 2021-22 with an impressive 80 points (36 goals, 44 points) in 66 games — the second-highest total amongst all first-time draft eligibles in the Western Hockey League.

Firkus doesn’t have an imposing stature at just 5’10” and 153 pounds, but his game can be intimidating to the opposition nonetheless. The 18-year-old has an innate ability to shoot off the fly, catching both opposing defences and goaltenders by surprise with his ability to release the puck. He uses his speed well to generate chances, but also to display a tenacious 200-foot game.

Nathan Gaucher, the highest-ranked North American skater from the Quebec Junior Hockey League this season, amassed 57 points (31 goals, 26 assists) in 66 games with the Quebec Remparts this season — the third-highest point total for a first-time draft-eligible from the league.

Gaucher is a center blessed with impressive size at 6’3″ and over 200 pounds. He isn’t the biggest bruiser in the draft class but uses his size and strength well in protecting pucks and driving the net. Best described as a center with a two-way game, Gaucher has good skating ability and vision that allows him to process developing plays at both ends of the ice.

Lane Hutson was the top producing defenceman on USA Hockey’s National Team Development Program’s Under-18 club in 2021-22, amassing an impressive 63 points (10 goals, 53 assists) in 60 games played. His 53 assists topped all skaters, and he was second on the squad with a +59 rating.

Hutson, who was named best defenceman and tournament all-star at the 2022 IIHF World Under-18 Championship, is a blueliner who possesses high-end skills. Though just 5’8″ and 148 pounds, Hutson has composure and quick hands when navigating through traffic. He compensates for his lack of stature with elite four-way mobility and high-end vision.

Jiri Kulich, who captain Czechia at the 2022 Under-18s and was named the most valuable player after leading the tournament with nine goals, spent the 2021-22 season in Czechia’s top men’s circuit, where he led all junior-aged players in scoring with 14 points (nine goals, five assists).

Kulich, who also captained Czechia at last summer’s Hlinka Gretzky Cup, possesses a truly elite shot — one of the best in the entire draft class. He’s got a nose for the offensive end of the ice and uses his skating and awareness to find the quiet areas of the ice. Kulich, though just 5’11” and 172 pounds, is an intense and competitive player.

Odelius, who also happened to post the top score in the ‘anaerobic fitness — mean power output’ category at the 2022 NHL Scouting Combine, plays a relatively mistake-free game. He’s adept at moving the puck up ice, whether it be with his skating or his quality passing game. His playmaking and passing from the back end are plus qualities, as is his level of confidence when commanding the ice.