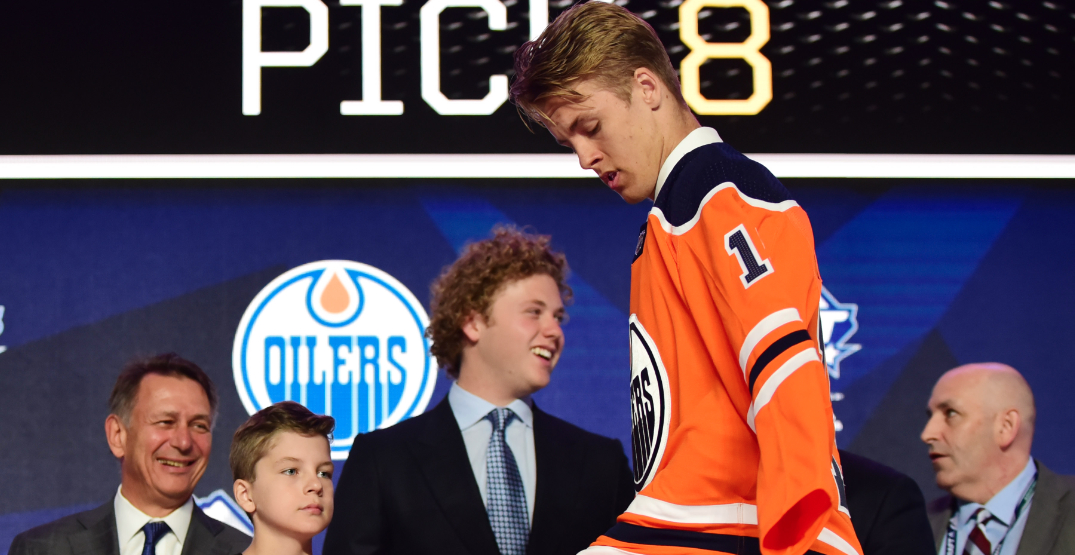 Not only did the Edmonton Oilers advance to the final four with a trip to the Western Conference Final, but they also did so without giving up their biggest trade asset — their first-round pick in the 2022 NHL Draft.

That draft capital will be important for general manager Ken Holland and the Oilers as they scrap and claw to create cap space in the coming years by graduating prospects from the junior and minor league ranks and onto the NHL roster. They’ll see plenty of that value in the likes of forward Dylan Holloway, blueliners Evan Bouchard and Philip Broberg, and goalie Stuart Skinner.

They’ll hope to see more with the four additions via the 2022 draft.

Tyler Wright and the rest of the Oilers’ amateur scouting staff aren’t going to have a full buffet of selections come the two-day draft affair, but it won’t stop them from being overly busy. Wright’s crew has four of seven picks to work with and will be especially active in the bottom half of the selection process with the ability to pick up prospects in the fifth, sixth, and seventh rounds.

Here’s where these picks line up:

While Edmonton retained the rights to their first-rounder, Holland opted to move each of the second-, third-, and fourth-round picks in trades made to help bolster the roster both last year and this season.

Holland optioned Edmonton’s second-round pick, No. 62 overall, to the Montreal Canadiens in the trade deadline deal to bring in local product Brett Kulak. Kulak averaged 17:06 of ice time in the Oilers’ playoff run and had five assists through the 16-game effort.

Their third-round pick, No. 94, was packaged with blueliner Caleb Jones and shipped to the Chicago Blackhawks in the trade that brought Duncan Keith to Edmonton last July. Keith had five points (one goal, four assists) in the playoffs after amassing 21 points (one goal, 20 assists) in 64 games.

Their fourth-round pick, No. 126, was traded to the New Jersey Devils over 14 months ago to acquire defenceman Dmitry Kulikov. Kulikov left the team as an unrestricted free agent last July.

It’s no secret the Oilers’ biggest need organizationally is goaltending, and that more than extends to their prospect pool. Skinner is going to get his first full-time look at the NHL level this fall, and while he may provide a reason for optimism, a system devoid of a full-on blue-chip prospect. The issue is the 2022 draft class doesn’t offer one, either, with the pool as weak as it’s been in recent history.

Up front, Edmonton is in good shape with the likes of Holloway, Xavier Bourgault, Raphael Lavoie, and even the likes of Carter Savoie, Matvei Petrov, and Tyler Tullio. The NHL level is starting to get stocked with defencemen that possess intriguing upside, too.

With no pressing need that makes sense in the first round, the Oilers will simply go with the tried-and-true format of picking the best player available on their list. And that could very well be blueliner Lane Hutson of the US National Team Development Program. The dynamic puck-moving defenceman, who was the top rearguard at the IIHF World Under-18 Championship, certainly fits well with the offensive talent up front, however, at just 5’8 and 148 pounds, his ability to translate his game against bigger, more physical competition will remain the biggest question mark.

Should Edmonton opt to look at goaltending, Reid Dyck might be a target worth exploring in the fifth round. The Swift Current Broncos stopper has size and fluid mobility, though his 4.26 goals-against average and .884 save percentage in 23 games played won’t highlight it. He’s certainly a longer-term prospect as non-blue chip goaltenders tend to be.

Marek Hejduk, the son of longtime NHLer Milan Hejduk, could be an interesting target in the sixth round. Another product of the US National Team Development Program, Hejduk has a two-way element to his game and some offensive potential remaining to be unlocked after underwhelming in terms of his pure numbers, but he always seems to make the right play on either side of the puck. The Parker, Colorado product and Harvard commit, is jumping all over the radar in terms of his draft projection.

With the third-last pick of the 2022 draft, Edmonton could sneak a peek at Joel Ratkovic Berndtsson, a left wing out of Frolunda’s program. The 18-year-old has average size but above-average puck sense and a willingness to sniff out scoring chances in all areas of the ice, as evident in his 22-goal, 49-point effort through 47 games in Sweden’s top junior circuit. With some time and development in his skating game, Ratkovic Berndtsson could be a solid investment.