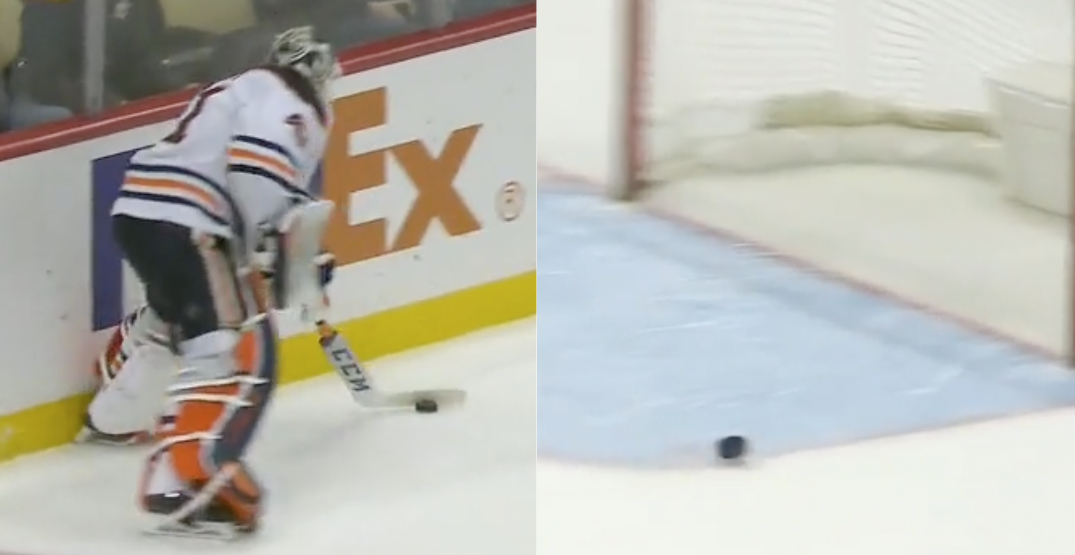 He gave it a couple of “terrible” attempts last week.

This one was a little closer to coming to fruition.

Edmonton Oilers Mike Smith took his third shot at an empty net in less than a week, rolling a 185-foot attempt just wide of the goal in a 5-1 win against the Pittsburgh Penguins on Tuesday night.

Mike Smith was this close to a goal. 😢 pic.twitter.com/ABItzxjDW0

“Smitty…everybody on the bench was going crazy,” teammate Zach Hyman told media postgame. “It was one of those where I thought it was going wide-left, and then all of a sudden it’s going in, and then it went wide-right. Hopefully, he gets another chance.

“He’s such a good puckhandler. He’s like a third defenceman back there. If he gets time, we’re up two or three; he’s going to take a look at it.

“If he’s got an open look, he’s such a good player with the puck; he may do something.”

Smith took two less-than-successful cracks at an open net in a 4-2 win against the Dallas Stars last Wednesday, saying, “I’m in there to stop the puck, I guess,” after the pair of failed attempts.

The first made it to the neutral zone. The second was knocked down with a high stick in Edmonton’s end.

His latest almost snuck in.

And it came after registering a goal on Penguins goalie Casey DeSmith earlier in the sequence.

“I think he always has a chance,” defenceman Evan Bouchard said. “Whenever you see the goalie out, you never know. Smitty can make a play to the defence, a forward, or he can shoot it himself. We were all kind of hoping that went in for him.

“Everyone was standing up. Everyone wants to see that, especially for someone like Smitty who’s battled so hard and played so well for us. You want to see that go in for him.”

Smith corralled the puck behind the net and launched a clearing attempt over the heads of all 11 skaters. A last-second skip pushed it wide just a bit.

“I thought it was close,” Oilers coach Jay Woodcroft said. “I was on my toes on the bench to see if it was going in. If there’s anybody that can do it, it would be him. I’ve never seen one live. I’ve seen them on video. It would’ve been pretty exciting.”

The 40-year-old stopper sniped one as a member of the Phoenix Coyotes on October 19, 2013, in a 5-2 win against the Detroit Red Wings. The goal came with a tenth of a second remaining on the clock.

Only seven goalies in NHL history have actually shot the puck into the net, including Ron Hextall, who did so twice, Chris Osgood, Martin Brodeur, Jose Theodore, Evgeni Nabokov, and Pekka Rinne.