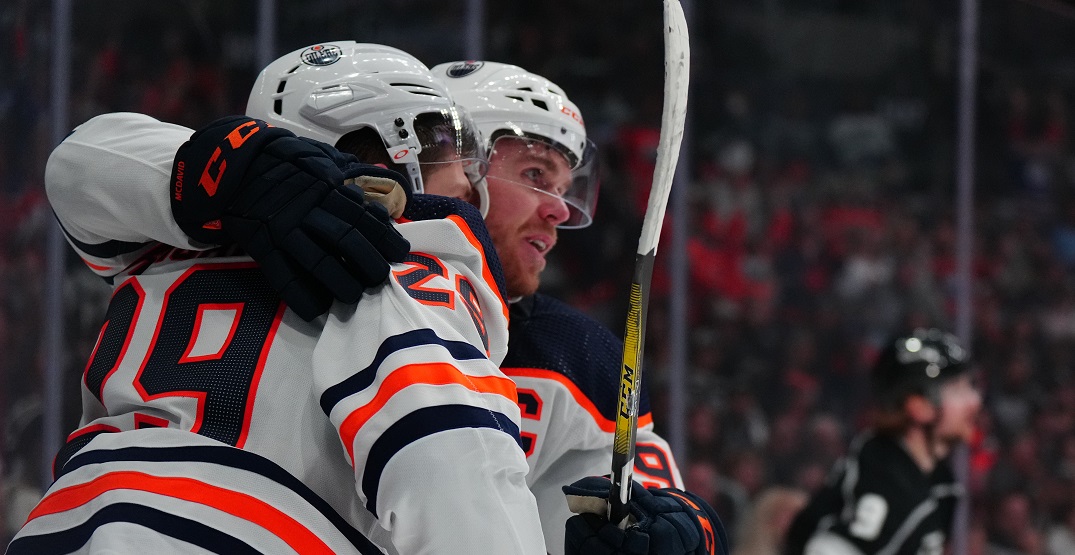 The Edmonton Oilers are now fully in business. And they don’t look ready to shut down shop any time soon.

After dropping the opening game of the playoffs, the Oilers have now a 2-1 series lead, picking up a crucial road victory at Los Angeles’ Crypto.com arena on Friday night.

Scoring the first five goals of the game, Edmonton knocked off the host Kings by a 8-2 score.

Evander Kane picked up a hat trick for Edmonton, netting his last with 20 seconds to go in the third period.

Leon Draisaitl opened the scoring on the evening, teaming up with Connor McDavid for a cheeky opening goal just under four minutes into the first period.

Zach Hyman and Ryan Nugent-Hopkins each added a pair of goals. Cody Ceci added a trio of assists in an offensive explosion for the Oilers.

The @EdmontonOilers have been firing on ALL cylinders this series. #StanleyCup

Edmonton went nearly 25 minutes before scoring their next goal of the game, but any Kings comeback effort was just a wishful thought.

Ryan Nugent-Hopkins scored his fourth career playoff goal for the Oilers with a marker with 5:41 left in the third to put the game out of reach.

Just over a minute and twenty seconds later, Nugent-Hopkins found the scoresheet once again to restore the Oilers’ five-goal cushion with a slick tip-in goal.

Mike Smith survived an Kings’ onslaught of 45 shots, after picking up a 6-0 shutout in Game 2.

Anze Kopitar and Phillip Danault scored for the Kings, but it was very much a case of too little, too late for Los Angeles.

The Oilers have outscored the Kings 14-2 over the last two contests, after scoring just 13 goals against them in four regular season contests.

The Oilers are now two wins away from winning their first playoff series since their 2017 first-round victory over the San Jose Sharks.

Game 4 for the series goes Sunday evening in LA at 8 pm MT/7 PT.