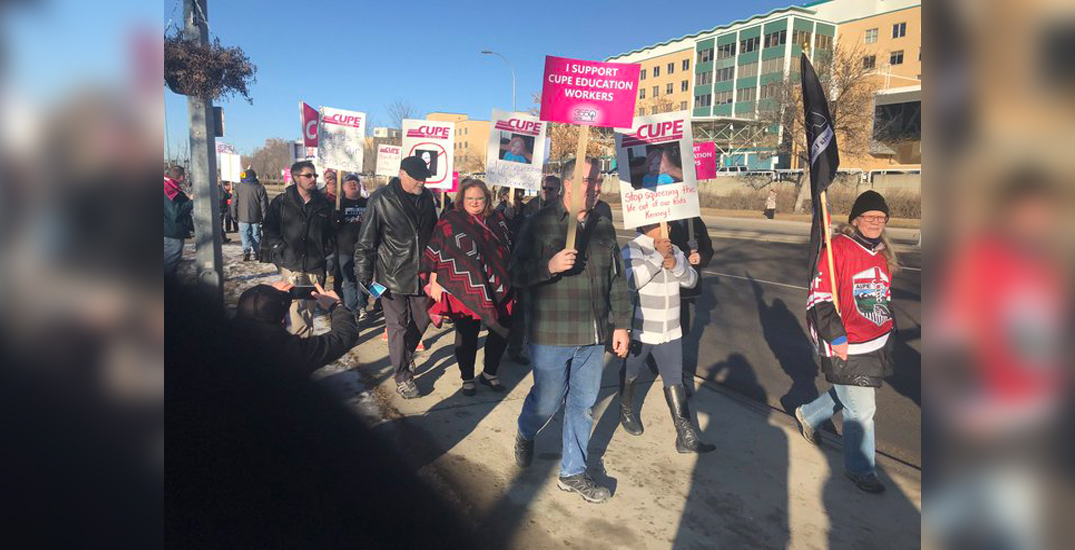 Educational assistants, administrators, custodial staff, tradespeople, parents, and students gathered outside the school board building at 11:30 am carrying flags and placards.

“These folks are absolutely essential to the school system,” Rory Gill, Alberta’s regional vice president of the Canadian Union of Public Employees, said in a phone interview.

The province’s education budget was frozen. But since cities like Edmonton are seeing increasing enrolment, Gill said the resulting budget shortfalls are akin to a cut because schools will need to serve more students with the same amount of money.

On Wednesday, the Calgary Board of Education announced it’s laying off 300 teachers due to a budget shortfall. The province’s Education Minister Adriana LaGrange has ordered an audit looking into the layoffs.

Edmonton Public Schools hasn’t yet announced if it will be doing layoffs, but Gill suspects they could be coming as the board “works through” its $34.4 million shortfall.

He added fewer hours for support staff would mean students with special needs aren’t getting the attention they need from educational assistants and that all students have to learn in dirtier buildings where it takes longer for things to get repaired.

A spokesperson for LaGrange told Daily Hive via email that the province’s 2019 budget honours the government’s commitment to maintaining education funding.

“Every student continues to be funded at the same base instruction levels as previous years,” said Colin Aitchison. “The government expects boards to direct resources to frontline student services and ensure that student learning is not impacted.”