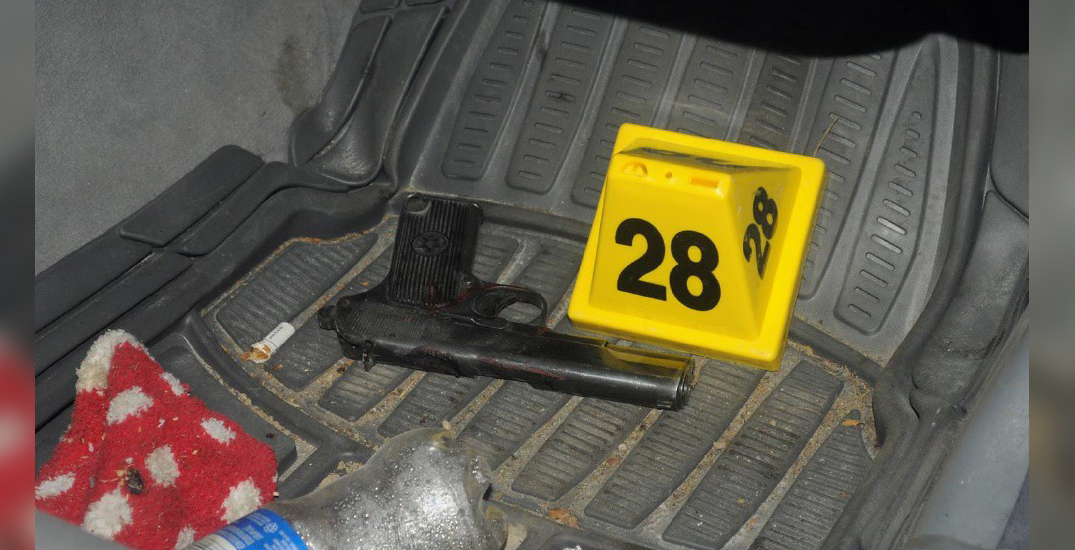 The suspect's black nine millimetre handgun was recovered from the front floor the vehicle he was driving. Photo: ASIRT

Officers had boxed in the suspect’s car and only fired after he tried to escape by ramming two police vehicles and firing his gun.

“In these circumstances, the use of lethal force was not only reasonable but necessary,” the Alberta Serious Incident Response Team said in a statement Monday.

“The man’s actions … placed officers in a situation where they were very clearly at risk of death or grievous bodily harm.”

The man, 30, was being investigated for trafficking methamphetamine, according to ASIRT. On September 9, 2017, he was located driving a white Mercedes-Benz with two 18-year-old girls as passengers.

When he pulled into the mall’s parking lot, several unmarked Edmonton Police Service vehicles turned their emergency lights on and boxed in the Mercedes.

Tactical officers exited their vehicles and set off two “flash-bangs” meant to distract the suspect. Then, officers asked the man and the two young women to raise their hands and exit the vehicle.

All three showed their hands but didn’t get out of the car. After a short standoff, the man shifted the Mercedes into reverse and rammed the police vehicle behind him. Then he put it in drive and hit another police vehicle so hard its airbags went off.

At that point officers used tear gas and moved their cars to trap the Mercedes again.

As officers tried to remove one of the girls from the passenger seat, the suspect reached for a bag around his neck and took out his gun.

Police yelled “don’t do it” several times before firing rubber pullets to try to disarm the man.

When that happened, the man pointed his gun directly at the nearest officer. He fired two rounds from his gun, but three police officers fired back at him.

The police bullets landed, and the man slumped over dead.

His body was removed from the car by paramedics, and an autopsy later confirmed there was methamphetamine in his system when he died.

The two 18-year-olds were not hurt.

“The evidence does not provide reasonable grounds to believe that any officers committed any offences,” ASIRT said.

The watchdog investigates all police-involved incidents in Alberta that result in death or serious injury.