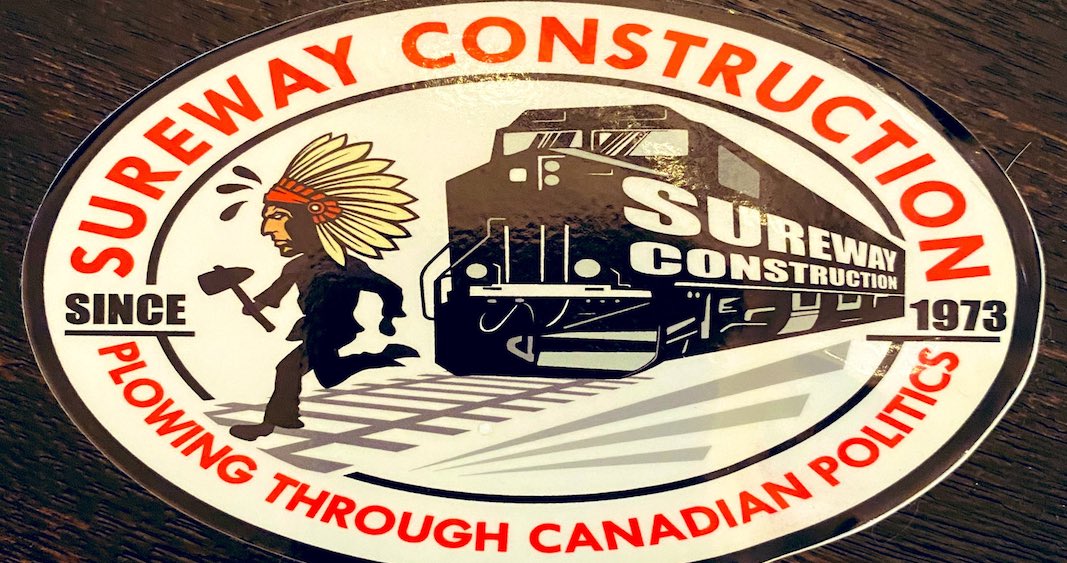 An Edmonton construction company has issued a statement denying involvement with racist decals seen circulating in the city.

Edmonton-based actress, model, and former Mrs. Universe Ashley Callingbull shared an image of the sticker on Twitter Sunday, saying that it was found by her father outside her reserve in Alberta.

My dad found this sticker on a pole in Edmonton. It was directly across from my reserve, the Enoch Cree Nation here in Alberta. This is absolutely terrible. @SurewayConstruc pic.twitter.com/axzEhfKTyY

The image depicts an Indigenous man running on train tracks, about to get run over by a train, with the statement “plowing through Canadian politics since 1973.”

There have been many protests along railways in parts of Alberta in solidarity with Indigenous communities, so the sticker is particularly troublesome in seemingly inciting violence against Indigenous people.

The construction company took to Twitter to respond yesterday, issuing an apology but claiming that they had nothing to do with the sticker.

“It has come to our attention that the Sureway Construction name is being inappropriately used on a decal portraying racist and political items on both public and private property,” reads the statement.

“Sureway Construction has not authorized these decals, and the sentiment is disturbing to our company. We are asking that if anyone in the public comes across this defamatory decal that they remove it and/or contact us to remove and let us know where it is. We are currently investigating the unauthorized origins and taking civil and criminal action on this.”

We are aware of the inappropriate and racist decals that are being spread about our company. As posted to our other social media platforms on April 16, 2020, we are appalled.https://t.co/R3w6foVe9Xhttps://t.co/sHHtq1UaHwhttps://t.co/L6QuweZlAs pic.twitter.com/K53VanyO4P

Although the company denies involvement, its website confirms that Sureway Construction was started in 1973, like the sticker claims.

“To the public we apologize that this abusive behavior has occurred and are committed to ensure the responsible parties cease these activities,” the company said.

“We are appalled by these derogatory sentiments towards our First Nation partners and colleagues.”

The company is asking those who find the stickers to remove them and contact Sureway Construction to inform them of the location.