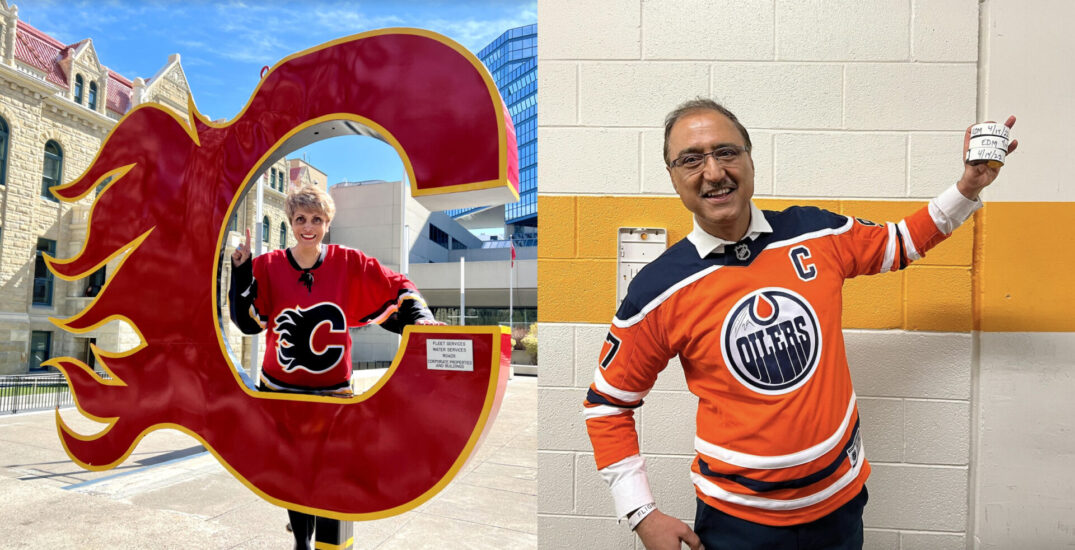 Courtesy of the Office of the Mayor, City of Calgary | Amarjeet Sohi/Facebook

The Battle of Alberta is officially on between the Calgary Flames and Edmonton Oilers, and even the cities’ mayors are getting in on the fun rivalry.

As the Flames and the Oilers prepare for their match-up in the second round of the Stanley Cup playoffs, Calgary and Edmonton’s mayors have made a friendly bet.

A Facebook post by Edmonton Mayor Amarjeet Sohi shares the details of the bet between himself and Calgary Mayor Jyoti Gondek.

“We have been waiting for this moment for so long, and FINALLY, the Battle of Alberta is upon us!” Sohi wrote in the post.

The rules of the bet state that the mayor of the losing team’s city will wear the winning team’s gear to a city council meeting on June 7, along with painting their face in the team’s colours, according to an email sent to Daily Hive from the Office of the Mayor, City of Calgary.

The loser will also donate to a children’s cancer foundation in the winning team’s city, in honour of Ben Stelter’s battle with brain cancer.

“If (and when) the Calgary Flames lose,” added Sohi, “Mayor Gondek will be … making a donation to Kids with Cancer Edmonton, inspired by Edmonton’s little hero, Ben Stelter.”

Both mayors seem to have caught playoff fever, along with most of the province.

“This series is going to be absolutely epic and I can’t wait to experience that downtown energy with fellow Oilers fans over the next few weeks,” Sohi said on Facebook.

Gondek seems confident that the Flames will be taking this round.

“Looking forward to seeing Mayor Sohi decked out in red and black,” she wrote.

The mayors of Alberta’s largest cities aren’t the only ones making bets on the teams, either. Canadian rapper Drake cashed in over $2 million after the Calgary Flames’ overtime win on Sunday night.

The Flames-Oilers series will be the first postseason edition of the Battle of Alberta since 1991, and the action kicks off at the Scotiabank Saddledome in Calgary on Wednesday, May 18, at 7:30 pm.

With files from Jack Weber