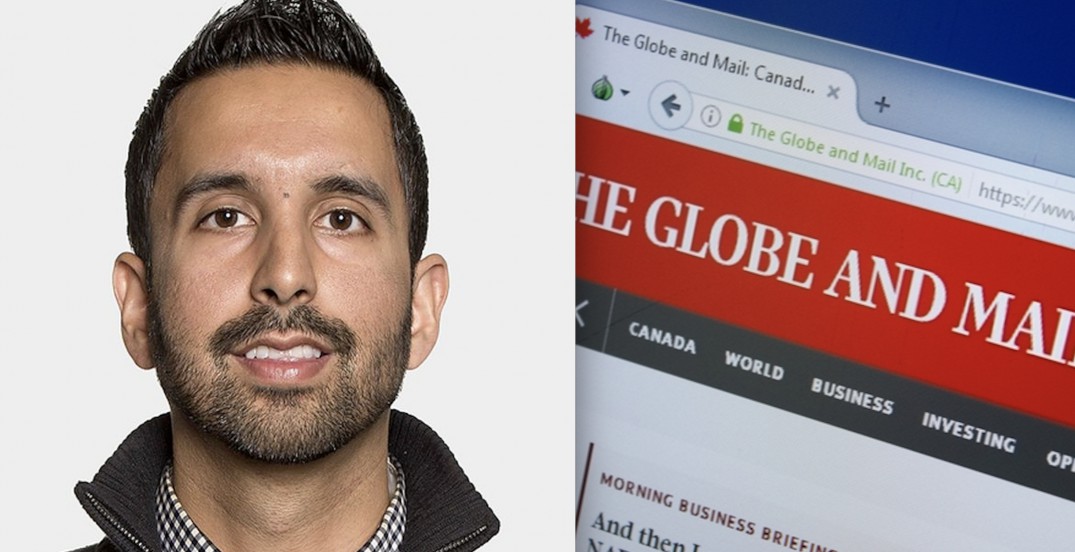 A longtime Globe and Mail newspaper reporter in Vancouver says he has decided to leave the publication “after a dispute over a story involving race.”

Sunny Dhillon, who has written for the paper since 2010, says he was assigned a story on October 22 looking at the lack of ethnic diversity on the incoming city council.

“It was a follow to the Vancouver civic election, which had seen the city vote in a nearly all-white council,” wrote Dhillon.

“The assignment came after the bureau’s morning meeting in which the discussion of the new council centred heavily, if not entirely, on its ethnic makeup.”

Dhillon said that the story folder and headline emailed to him from the assistant editor “confirmed this view.”

He began working on the story and interviewed several candidates who ran in the Vancouver election but “picked up thousands fewer votes than their white colleagues.”

When he notified the Globe and Mail’s bureau chief that the interviews were complete and he was going to begin writing the story, Dhillon said he was told “to focus less on the issue of race and to focus more on the fact eight of the 10 elected councillors were women.”

He says he was planning on including the majority female council in his story, but that the issue of race should take priority

I’ve decided to leave The Globe and Mail after a dispute over a story involving race. You can read more here: https://t.co/jBstzaXZoo

“But the public discussion seemed to centre on the fact a city in which 45% of people are of Asian descent did not have a single such person on council,” said Dhillon.

“I felt we were making a choice that would undercut the voices of people of colour.”

Dhillon says he decided to follow up with the bureau chief about the article but claims she was not receptive to his thoughts.

“The bureau chief told me what I thought did not matter. The newsroom, she said, was ‘not a democracy.'”

This led to Dhillon’s decision to formally resign.  He explained the reasoning behind his resignation in an online post on Medium titled “Journalism while brown and when to walk away.”

“I write this piece with the hope it will lead to meaningful reflection on the lack of diversity in Canadian journalism and the problems therein,” he said.

“I decided to leave The Globe and Mail because that final conversation inside the bureau chief’s office crystallized what I had felt: What I brought to the newsroom did not matter,” he said.

“And it was at that moment that being a person of colour at a paper and in an industry that does not have enough of us — particularly at the top — felt more futile than ever before.”

Dhillon concluded the story with the following statement:

When a story or column does not adequately, if at all, understand or consider the perspectives of the nonwhite people it involves, what do you say? When a story involving people of colour is assigned with a colour-blind lens and a false sense of objectivity, what do you do? When you pitch projects on race and multiple times see the boss prefer a race-related project pitched by a person who is white, regardless of your read of the room, what is your recourse? When you ultimately stop pitching stories on race to preserve your own sanity, what good are you doing the very nonwhite people whose perspectives you deem yourself to be in the newsroom to share?

How many battles do you have in you?

The Globe and Mail and Dhillion have not responded to a request for comment from Daily Hive. You can read Dhillon’s full post here.