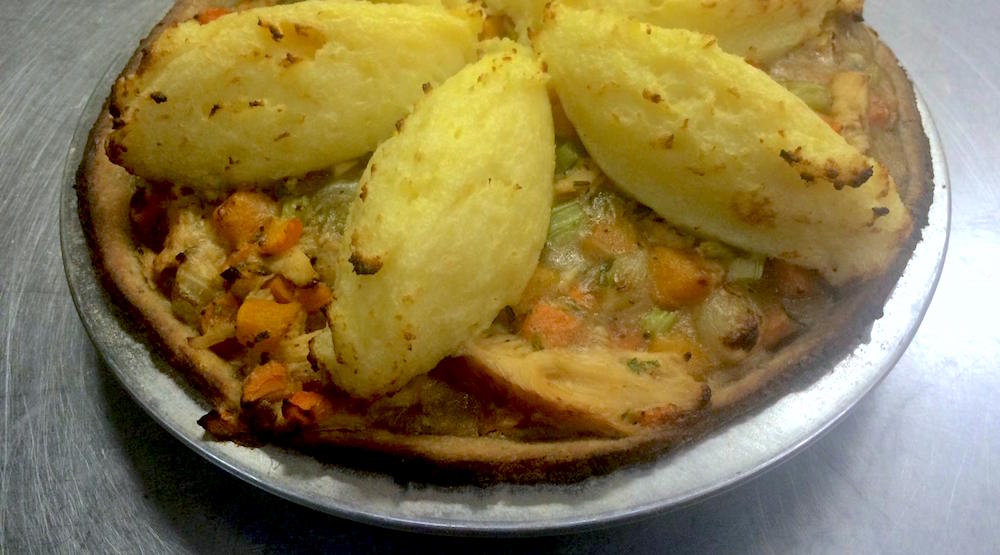 Imagine turkey dinner with all the trimmings in one tidy dish? Calgary’s Pie Cloud is offering up the ultimate Christmastime feast in a pastry package: Turkey Dinner Pie. Plus, the restaurant and bakeshop is going full-on festive with their holiday pie selections, including their tantalizing “12 Pies of Christmas.”

But first, let’s talk turkey. Pie Cloud has been prepping Turkey Dinner Pies since pre-Thanksgiving (and are even filling orders for American ex-pats celebrating Thanksgiving this week in YYC) and are gearing up to be baking more for Christmas.

Pie Cloud’s Turkey Dinner Pie is big ol’ pot pie filled with roast turkey, veggies, and gravy, topped with piles of mashed potatoes, all sitting in a crust made of rosemary sage stuffing. And, yes: there is a side of cranberry relish.

Ordering up one of these epic pies is $49, and the restaurant says it will feed an average of six adults; those six mashed potatoes on top easily distinguish six portions.  However, if you don’t have a feast table for the holidays where this might fit, Pie Cloud says they do a single serving size in the restaurant daily.

In addition to their insane Turkey Dinner Pie, Pie Cloud is working on more savoury concoctions for the holidays, like braised beef and a traditional tourtiere (French-Canadian meat pie).

Those with a sweet tooth must take note of Pie Cloud’s whimsical “12 Pies of Christmas,” which is pretty much what it sounds like: 12 pies, each themed to that (turkey of a) Christmas song “12 Days of Christmas.”

The 12 pies run the gamut from Golden Pecan Ring Pie (#5, aka “five golden rings,”) to #10, the Lords-a-Leaping for Hot Chocolate Pie.

“We had a lot of fun coming up with the 12 Pies of Christmas,” Pie Cloud told Daily Hive in an email.

For anyone keen on trying them all, Pie Cloud is making a 12-pie sampler set, with mini-versions of each pie, for $124.95, which would likely feed six to 12 hungry pie lovers.

Want a slice of the Christmas pie action? Pie Cloud will be rotating the “12 Pies” for in-house eating during the season, and any of them can be ordered ahead if you want to pick up a whole pie. The full-size Turkey Dinner Pie is always a pre-order.