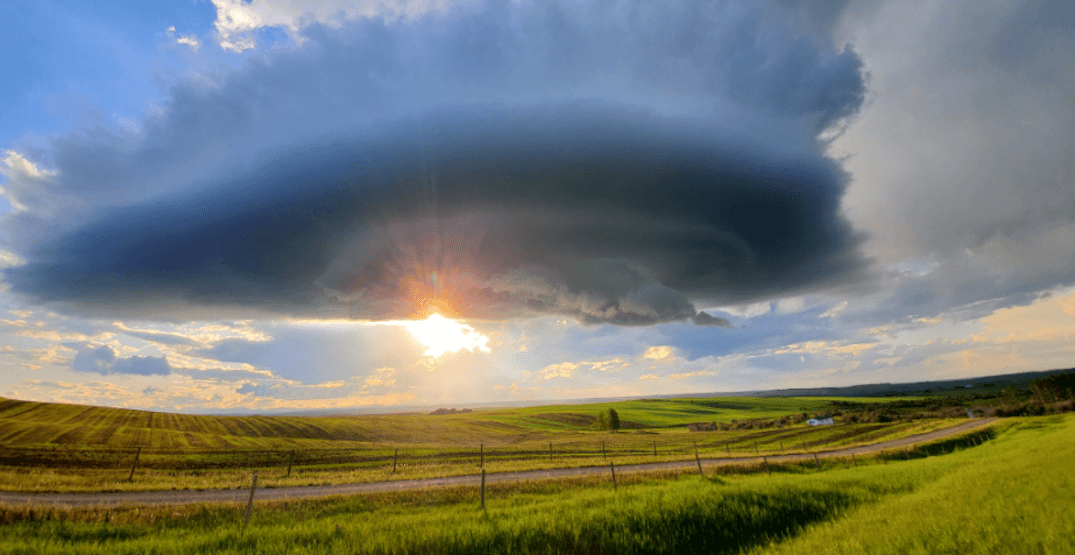 Alberta’s storm chasers were out in full force yesterday when thunderstorms rolled into the province.

Multiple regions of Alberta fell under Environment Canada severe thunderstorm watches and warnings, including the City of Calgary and its surrounding areas.

The Weather Network even warned of the potential for tornadoes to develop, though stated that they would likely be seen on Wednesday, June 19, if ever.

While no one managed to snap a shot of a tornado in action (thankfully), there were still plenty of awe-inspiring photos taken during Tuesday’s storm of the various clouds, lightning strikes, and painted horizons created by the weather event.

Take a look below to see the looming storm as it made its way throughout the province:

@TiffanyGlobal #abstorm I think I got my 2019 lightning shot already. When you think you didn’t get your bolt shot, then going through the photo’s after and you are floored that you did. Ohhhhh my.
Feel free to share!
Near Indus, AB. June 19/2019. 00:51 pic.twitter.com/pT7RmPioP6

#abstorm looks like a ton of rain in the mountains this morning at 9:30am! 😬🌩🏔 who else got woken up at 5am from thunder and lightning? My cats didn’t enjoy it 🙀#downtown #calgary #weatherwatcher pic.twitter.com/3bw1L7JjDz

Some of my favorite shots from yesterday’s #abstorm chase north of #yyc. Never seemed to end as once supercell dies another one was born right behind it. Then the lightning afterwards was like Zeus wanted to show off his fireworks. Strikes almost every second near Crossfield. pic.twitter.com/sAFtaOBhTR

Yesterday was fun chasing in the foothills. Haven’t gotten to the camera yet for editing, but this one right out of the phone already made the day worth it. #abstorm pic.twitter.com/1Ivd6cvi8c