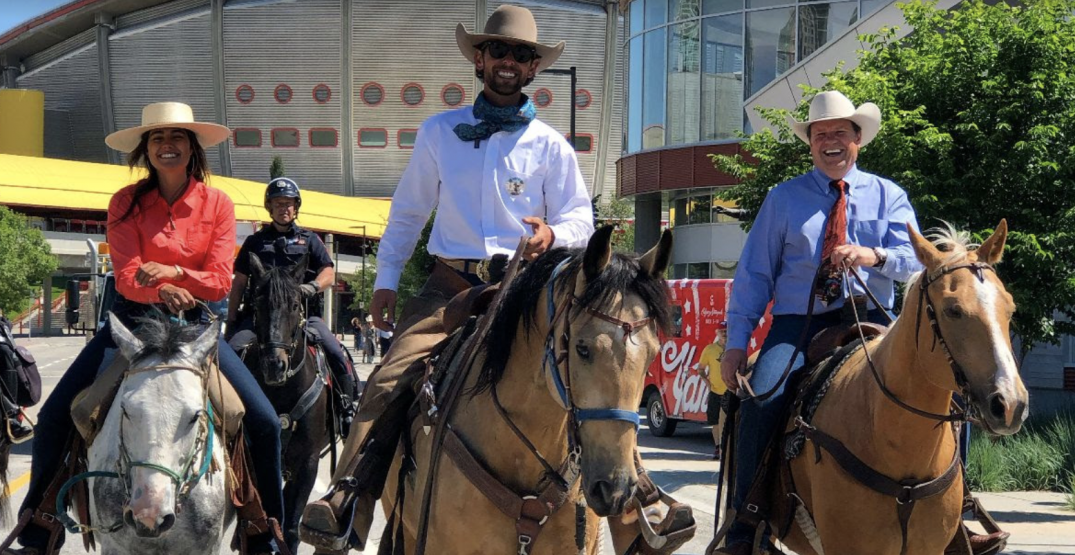 We’re on Day 7 of the Calgary Stampede, and the weekend is almost within reach.

As we head toward the final hurrah (or should we say “Yahoo”?) of the 10-day event, there are still tons of things to do down at the grounds.

JoJo Mason will be performing at Nashville North on Thursday evening, while Big Wreck will grace the Stampede Summer Stage at 9 pm. You can also catch the Dog Bowl, Elbow River Camp vendors, The Market in the BMO Centre, the rodeo, and more throughout the day.

Plus, today is Throwback Thursday at the Calgary Stampede, and they’re celebrating like it’s 1999. “Pull out your high-waisted Wranglers and brightly patterned shirts as we kick it back to the ’90s,” reads an email from event organizers.

During Throwback Thursday, guests can Stampede like it’s 1999 with $9 admission to Stampede Park all day long.

Check out the following events and so much more happening on the Stampede grounds this Thursday, July 15.

The Market in the BMO Centre

Whether you’re in search of a souvenir, a unique accessory to add the finishing touch to your Stampede outfit, a cool new treasure or gadget, or one-of-a-kind arts and crafts from local artisans, there are a variety of vendors in The Market, where you can shop your heart out.

Celebrate and learn about Indigenous culture while visiting a variety of vendors, makers, and artisans in Elbow River Camp. There are also 26 tipis on display, traditional dancers, and more. If you’re in search of a traditional treat, make sure you hit up the Bannock Booth.

When: Daily until July 18
Time: 11 am to 9 pm
Where: The east side of Stampede Park
Cost: Free with admission to Stampede Park

Who doesn’t want to see some cute doggos? The Dog Bowl boasts an elite troupe of Canine Athletes, who will demonstrate their skills in dock-diving, freestyle dancing, agility poles, frisbee, and more. The show is fast-paced, action-packed, and sure to delight dog lovers of all ages.

When: Daily until Sunday, July 18
Time: 1:30, 4:30, and 7:30 pm
Where: Near the Olympic Way entrance and in front the Scotiabank Saddledome, Stampede Park
Cost: Free with admission to Stampede Park

Whether it’s your first or your fiftieth time at the Calgary Stampede, one thing is certain; there’s nothing like some two-stepping at Nashville North to get you in the ‘Pede mood. BC-based JoJo Mason will bring the country spirit to the Stampede’s iconic live music venue on Thursday evening and get everyone partying as we head toward the weekend.

When: Thursday, July 15
Time: 9 pm
Where: The Nashville North tent is located near the Grandstand, Stampede Park
Cost: Free with admission to Stampede Park