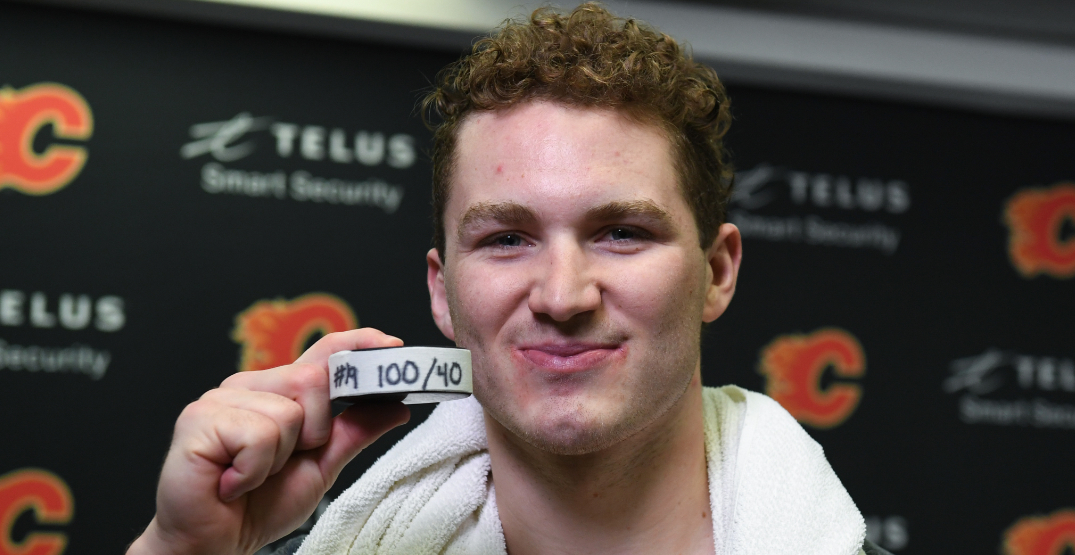 The goal was typical.

The celebration, uh, left a little to be desired.

The roar of the crowd combined with the simultaneous standing of the 17,280 in attendance to witness Matthew Tkachuk’s milestone marker might’ve been enough to throw off even the most composed of players.

It certainly forced the 24-year-old into a stumble.

“I was super excited and toe-picked because of it,” Tkachuk admitted of the celebration that simultaneously netted him his 40th goal and 100th point of the season.

40 goals and 100 points in one puck. pic.twitter.com/RwaRebMyW1

“The coolest part for me was the guys coming in and how they were way more excited than I was,” added Tkachuk, the sixth player in the NHL to crack the century mark this season. “I didn’t think that could be possible. And then going down the line and seeing everybody and even after, they’re all so excited for me and you just can’t put that into words, really.

“I think what hits immediately is that I never would have imagined that happening. When it did, it’s a feeling that you can’t really explain. Seeing the guys making an even bigger deal about it, that was way cooler to me.”

With the tally — appropriately coming around the blue paint — Tkachuk became the first Flames skater to reach the 40-goal mark since Jarome Iginla sniped 43 in 2010-11. More impressively, he’s the first Calgary-based player to score both 40 goals and net 100 points in a single season since Theo Fleury did so in 1990-91.

He joins teammate Johnny Gaudreau above the 100-mark, becoming the first pair since Fleury and Al MacInnis in 1990-91 to accomplish the feat together. They’re just the fourth set of Flames teammates to do so overall.

“It’s awesome,” teammate Mikael Backlund said. “Really happy for him. You can tell right away when he stepped into the league he was a special player, special character on the ice. Loves scoring goals and being a big-time player. He’s just been getting better and better every year, and this year he’s taken it to another level. The whole line has been playing real well. I’m very happy for Chucky.”

A lot to unpack, for sure.

Plenty of reason for the fans to rise to their feet, too, giving the Scottsdale, Arizona product a full-on standing ovation for the season-long effort.

“Normally, this is really the only place in the league that would give me an applause like that,” said Tkachuk, who grabbed family bragging rights earlier in the week with his 99th point. “I think after the hat-trick the other week, I got a big applause, but nothing compared to that one.

“That was really, really cool and very special.”

Even more so given the circumstance.

The goal helped the Flames clinch its second Pacific Division title in Tkachuk’s tenure in Calgary. The Flames also hoisted a Pacific banner in 2018-19 before being punted from the Stanley Cup Playoffs in five games by the Colorado Avalanche.