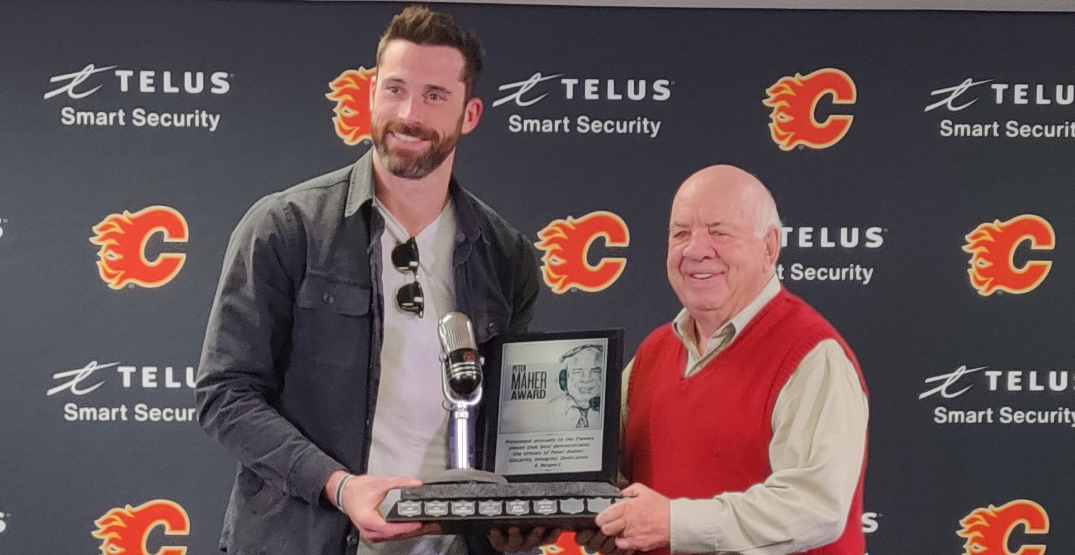 Erik Gudbranson is a good guy. He’s got a trophy to prove it.

The Calgary Flames defenceman was named the recipient of the Peter Maher Award, presented annually to the team’s player who “best demonstrates the legendary Hall-of-Fame broadcaster’s qualities of sincerity, integrity, dedication, and respect.”

“Show this to my kid one day. This means a lot,” Gudbranson said Friday. “It’s very kind of you to award me with this. I’ve enjoyed my time with you guys. You guys have been awesome to me all year long. I try to give you guys good content. I understand the business you’re in. It’s a tough business. It’s an ever-changing business. Just try to be open and honest with you at all times and show you exactly who I am.”

This year's recipient of the Peter Maher Good Guy Award?

The award is voted on by local Calgary media.

“They call it the ‘good guy’ award, but I’m going to talk like Darryl for a moment…don’t be a good guy on the ice. Good guys don’t win. Off the ice, be a good guy all the time,” Maher said in presenting the award to Gudbranson.

“You guys are here in front of us now. Last year, the whole Zoom thing, that was just difficult on everybody without being in the presence of other people,” he said. “It’s a lot better this way. I’m glad we can look each other in the eye and have a conversation. I’m definitely glad it’s back to normal in that sense.”

Gudbranson joined the Flames on a one-year, $1.95 million contract on September 10. He’s helped anchor Calgary’s third pairing with Nikita Zadorov. The 30-year-old is in the midst of a career season, setting new personal bests in goals (6) and points (17).

“The Flames organization gave me a really good opportunity,” Gudbranson said. “A team wants you to come here, you can’t really look past that. They gave me a great opportunity and on a daily basis just trying to make best on that chance and keep getting better.”

“It’s a combination of a number of things,” Gudbranson added. “It’s a really good organization with a lot of good people in it, a lot of supportive people. That goes for the people we see on a daily basis to the people in the back room grinding numbers and helping us out that way.

“It’s been a great opportunity for me. Really, really good teammates, good coaches. Our whole support staff is tremendous. It’s gelled really well and put ourselves in a good spot.”

Gudbranson had one goal and four points in 45 games split between the Ottawa Senators and Nashville Predators last season.

He had 12 goals in his previous 318 games split over six seasons with six different organizations.