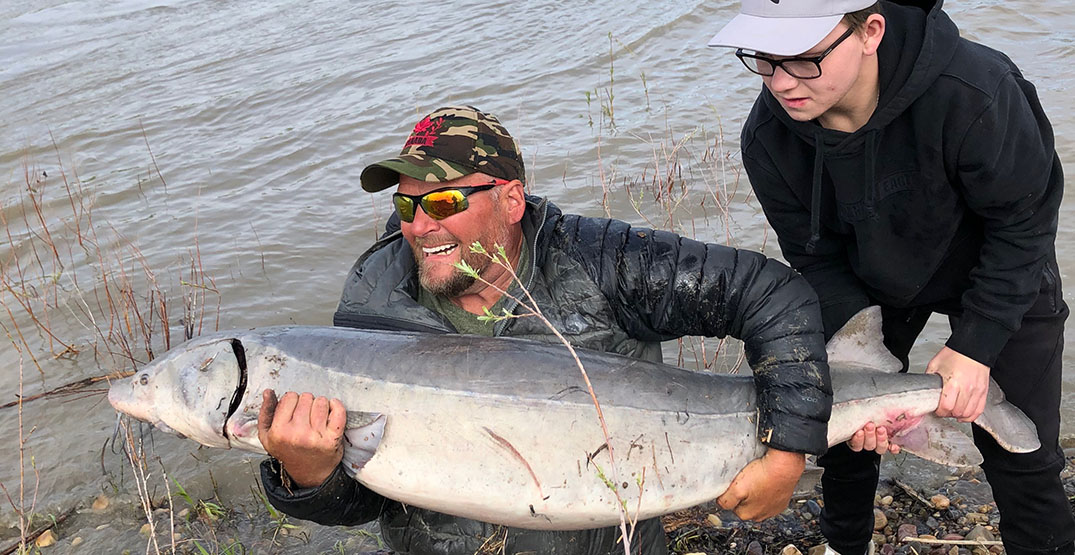 A Lethbridge man is celebrating catching a massive sturgeon last week after an intense struggle that left him with a broken rib and a gash in his arm.

Blair Murphy was fishing on the Old Man River behind Paradise Canyon just outside of Lethbridge for the sixth day in a row on May 29. He was getting frustrated because he hadn’t caught anything noteworthy after more than 60 hours on the riverbank.

His father died 11 years ago on that day, Murphy remembers saying “come on dad, I need some help here,” he told Daily Hive in a phone interview. Ten minutes later, the sturgeon bit his line.

Catching the huge fish was a battle. It dragged Murphy down the river bank, but he chased it along with two teenage boys, Noah Higgins and Hunter Martens, who had been watching.

“Once they get to the fast running water you don’t get them, hardly,” Murphy said. “Because they are such powerful fish.”

Eventually, Murphy and the boys were able to net the fish and pull it up onto the shore.

They measured the sturgeon and took photos with it, and Murphy estimated it could weigh somewhere between 130 and 140 pounds based on its girth circumference. He said a fish that size could be up to 80 years old.

“It’s the catch of a lifetime,” Murphy said.

After getting a good look at the leathery fish, Murphy and the boys put it back in the river. Sturgeons are a threatened species in Alberta, and must be released after being caught.

Lake sturgeon are the largest freshwater fish species in the northern hemisphere, according to the government of Alberta’s website. The largest one to be caught on record weight 105 pounds and was 155 centimetres (61 inches) long.

At 178 centimetres (70 inches) long, Murphy’s fish could be a record-breaker.

For now, the Lethbridge resident is recovering at home after the ordeal. He said the cracked rib has made it difficult to work out as usual because he’s short of breath. He said the catch happening on the anniversary of his father’s death made it even more special.

“I will never ever forget that,” he said.