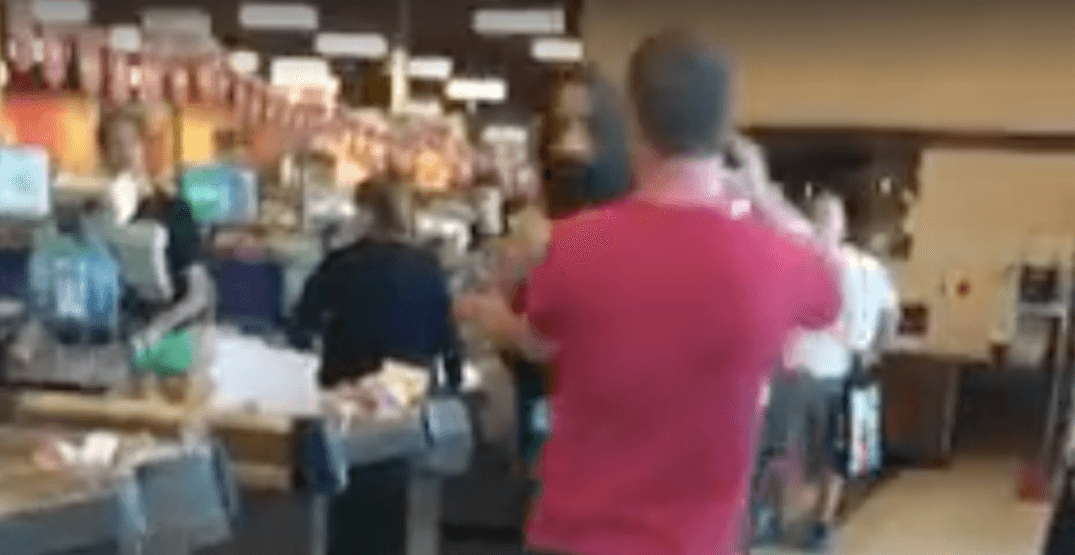 A screenshot from the racist incident at a Sobey's in Ontario. (Katie Montoya / Facebook)

Katie Montoya was shopping at her local Sobeys in London, Ontario – about two hours from Toronto – on the evening of July 17, when she captured what appears to be a race-related incident on camera between two other people in the store.

The video shows a man attempting to leave the store being stopped by another man.

The man then reportedly asked the victim if he was “scared to be deported,” and “[asked him] to show his Canadian documentation,” said Montoya.

Seemingly not content to simply let the situation go, the man then told the victim he would conduct a “citizen’s arrest” if he made any further attempts to leave the store.

The video quickly went viral, and at the time of this writing, has already been viewed over one million times.

At approximately 7 pm, London Police responded to a grocery store for reports of two males arguing inside.

According to a release, the interaction caught on video was the second incident between the two men while inside the store and no injuries were sustained by either party. The victim in this matter chose not to proceed with charges in regards to the incident. As a result, police warned the other male for assault and no charges were laid.

Race-related comments were reported to have been made during the interaction. The London Police Service Hate Crime Unit is reviewing the incident.

Responding to some commenters on the video that the man was a shoplifter, Montoya said that wasn’t the case.

“He was not,” she wrote. “He rightfully paid for his items.”