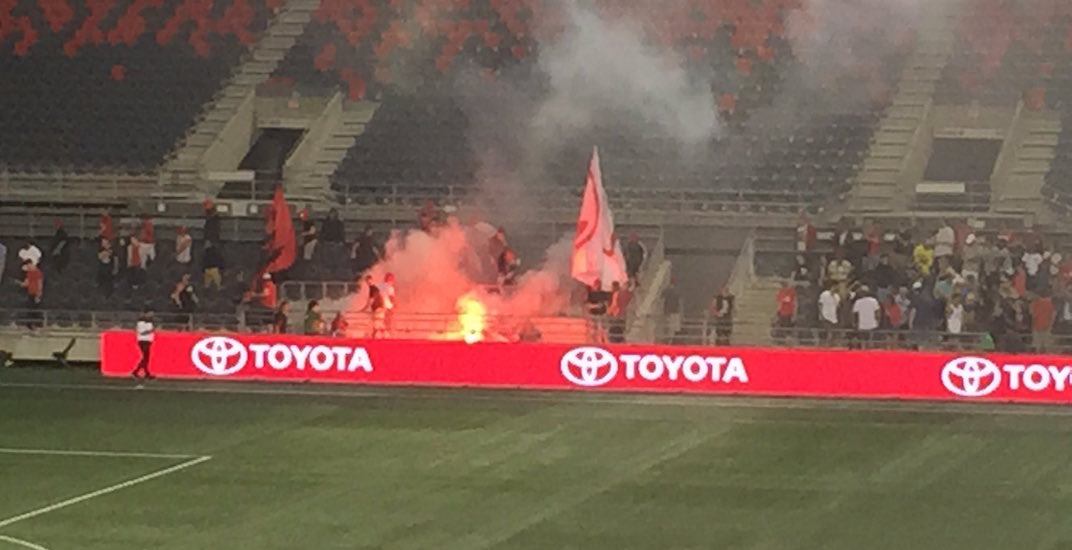 Things got a little out of hand with some Toronto FC fans during the second half of their away match against Ottawa Fury FC, on the opening day of the Canadian Championship.

They lit their section on fire.

Flames were visible from the other side of the pitch, as smoke plumed from the TFC supporter section at TD Place Stadium in Ottawa. An explosion of some sort startled fans, and the match was temporarily suspended to deal with the issue.

The problem appeared to be caused by some flares lit by the fans catching fire with flags/banners.

And just like that #TorontoFC #TFC supporters have set fire to our field and stadium. LOSERS!!!! @TorontoFCViews @TorontoFCII @torontofc #CanChamp #FuryFC #WeStandTogether where are @OttawaPolice this calls for arrests!!! pic.twitter.com/IHhIK0axtS

@CBCOttawa … @TorontoFC fans just started a fire 🔥 in Lansdowne Stadium @OttawaFuryFC game… what in the … pic.twitter.com/tUGtgb78IJ

Thanks to @martyn_bailey for sending across this video that was passed on to him by another fan at the stadium. That's a pretty scary bang. #TFCLive pic.twitter.com/nUjFOl0LAJ

Here is video of the explosion. Fairly large bang coming from the @torontofc supporters section at @TD_Place in their #VoyageursCup semi final match vs @OttawaFuryFC #Vcup #CanChamp @CanadaSoccerEN

The fire was eventually put out with the help of some fire extinguishers, and the teams got back to playing soccer, with Toronto winning 1-0.