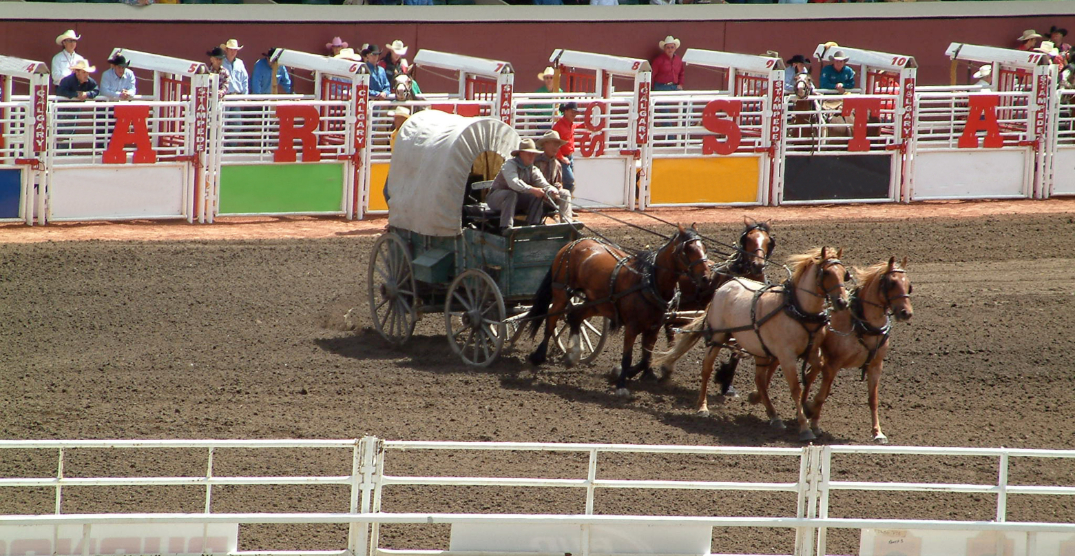 People from across Alberta and Canada are flocking to Calgary for the return of the Calgary Stampede, but the event’s program gives reason for pause. For the first time since 2019, the Stampede’s deadliest event is returning: the Rangeland Derby chuckwagon races.

It doesn’t take much to see through the thin veneer of the Stampede’s carefully crafted safety-first defences to the inherent danger on which the races were built. The Calgary Stampede’s chuckwagon races continue to be the cause of near-annual horse deaths; more than 70 horses have been killed by the event since 1986. Risk is so intrinsic to the nature of the sport that the World Professional Chuckwagon Association openly deems it the “Half-Mile of Hell.”

The last time the races were held, six horses died. One incident, in which the death of a horse and the injuries of three more were ruled to be caused by driver error, resulted in the event’s first-ever driver disqualification and potential lifetime ban. That driver has since been reinstated and is now racing in 2022 without missing a single year.

In 2021, Stampede organizers cancelled chuckwagon racing due to safety concerns over a lack of practice season. Some of the Stampede’s usual wagon drivers – who purport to have the best interest of their animals at heart – went on record slamming the unprecedented safety precaution.

Unsurprisingly, when a similar event went ahead in nearby Red Deer that season, a horse was injured and had to be put down.

Stampede organizers have had two years to reconsider the deadly sport; but instead of responding to public demands to remove the races, they made a minor rule change that decreases the number of wagons on the track from four to three.

This is unlikely to differ in impact from previous changes, which set a bleak precedent for the outcome we can expect.

In 2011, the Stampede dropped two outriders from the event, bringing the number of horses on the track down to two outriders per wagon in each heat instead of four. The following year, an outrider horse sustained severe injuries after crashing into an unexpectedly halted wagon in an incident that claimed the lives of three more horses.

The problems with the chuckwagon races cannot be solved with simple rule changes. The volume of horses on the track in each heat is indeed problematic, but the threat to the animals’ safety runs much deeper.

Without serious structural changes to the event, the races will always be at high speed and close proximity, running the risk of chain reaction incidents like the one seen in 2012. The races also continue to use thoroughbred racehorses, many of whom have broken their legs during the event. Animal scientist Temple Grandin has pointed to an inherent problem with the use of thoroughbreds as selective breeding for speed has weakened their legs.

Rather than addressing these serious issues, Stampede organizers have opted to bring back the event in full force.

It is worth noting that the return of the chuckwagon races is not for lack of alternative events. The Stampede has been called Canada’s largest arts festival, with visual arts having been incorporated since the event’s inception. The Stampede’s diverse range of music performances is estimated to draw more than 600,000 attendees each year.

With an array of safer options to truly celebrate the vibrant culture of Calgary, it is baffling to see the Stampede leaning back into an event that is as controversial as it is dangerous.

It is obvious that the much-needed shift away from the “Half-Mile of Hell” will not come from the common sense of the organizers, but from the pressure of the public. If Stampede-goers do not wish to bear witness to possible deaths of horses, year after year, the choice is clear: skip the chucks.