No matter which side of the debate they landed on, it’s clear that Calgarians are passionate about today’s Olympic plebiscite.

Not a bad turnout, given that there were 767,734 eligible voters in Calgary on the 2018 list provided by the Province of Alberta, and three hours still left of voting when the 5 pm numbers were released. 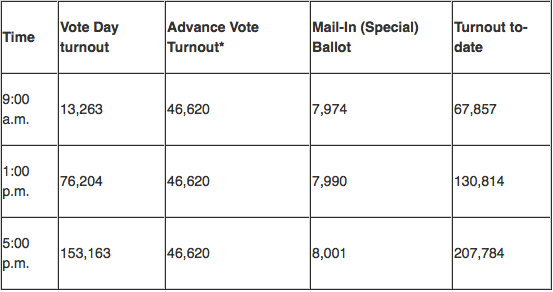 To put those numbers into perspective, the 2017 mayoral election had seen 157,697 Election Day voters as of 6 pm, and ended with a total of 387,583 — though there were seven days of advance voting in that election, and only two days for the plebiscite.

Voting stations for the city-wide plebiscite have officially closed as of 8 pm, though anyone who arrived at their designated station before 8 pm will still be allowed to vote if they wait in line.

Results are expected to come shortly.