Calgarians are at the polls today to have their say on whether or not they want YYC to bid for the 2026 Winter Olympics.

According to the latest update from the City of Calgary, as of 1 pm, there have already been 76,204 Calgarians that voted in person today, 46,620 advanced votes have been counted, and 7,990 mail-in (special ballots) have been sent in. There has been a 130,814 voter-turnout so far.

There are 767,734 eligible voters in Calgary on the 2018 list provided by the Province of Alberta. 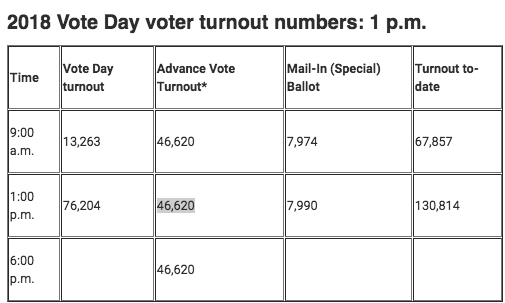 The next voter-turnout update will be announced at 6 pm.

Voting stations for the city-wide plebiscite are open until 8 pm and those eligible must vote at their designated stations. Voters also must bring authorized ID with them.