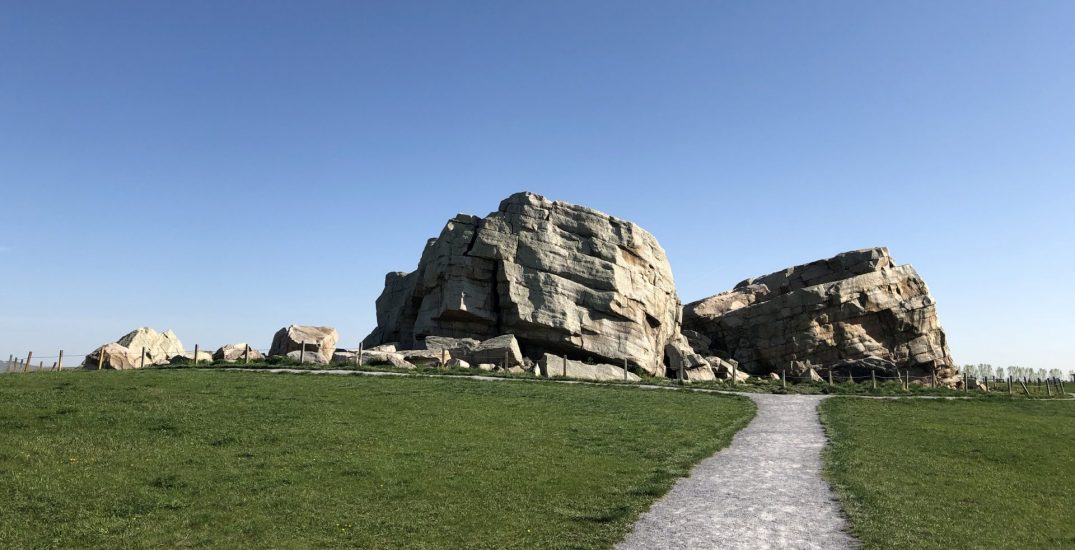 Anyone driving on the Alberta prairies south of Calgary has likely seen this natural wonder: a massive boulder that seems to pop up out of nowhere in the middle of the flat, flat land that surrounds it.

No, it wasn’t planted there by locals as a tourist trap – the Okotoks Erratic (aka Big Rock) was transported to the area by way of a rockslide and a glacial sheet of ice. 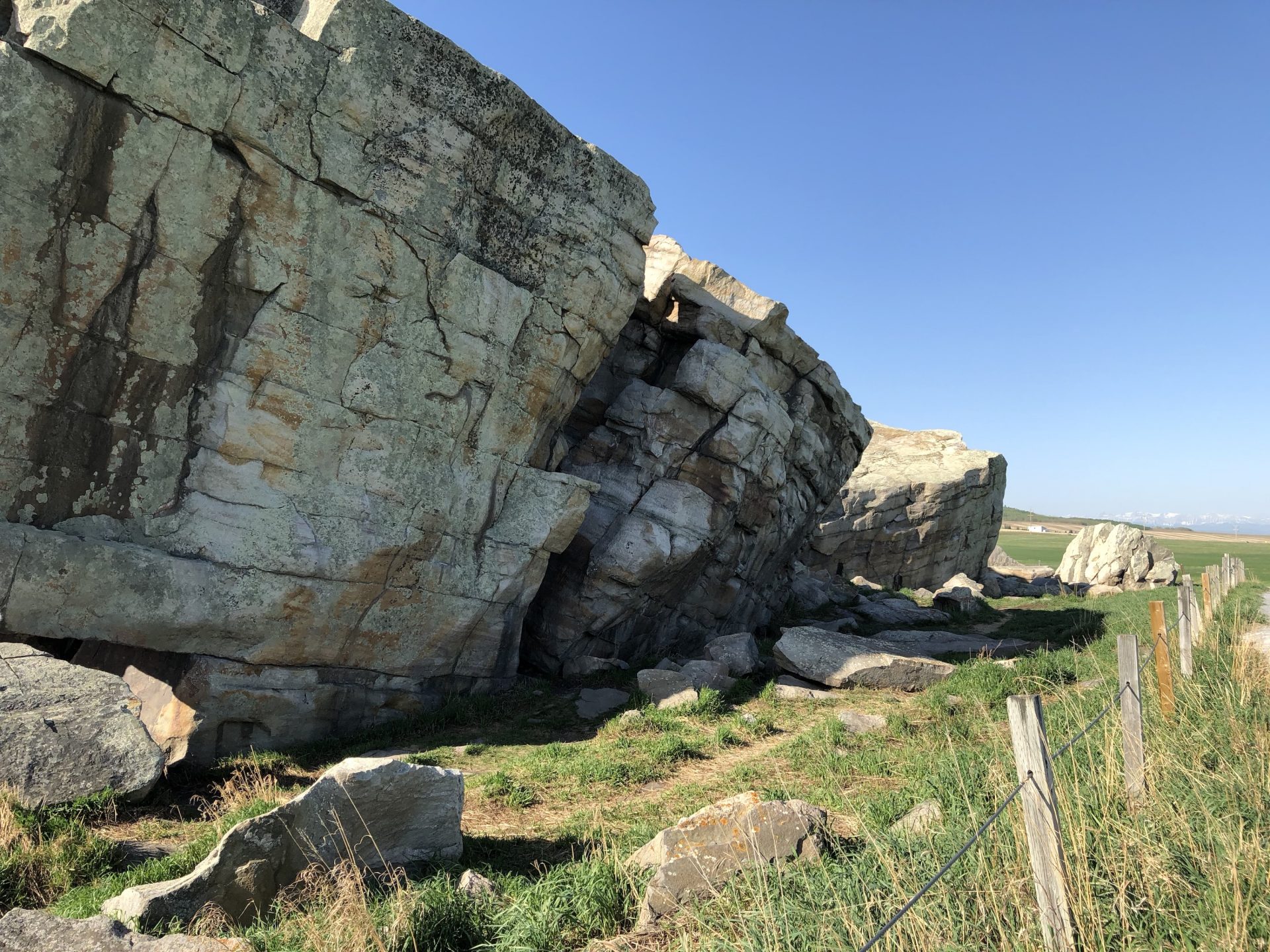 Weighing in at 16,500 tonnes, Big Rock is an enormous glacial erratic that, according to the Government of Alberta’s website, was originally part of a mountain formation in what is now Jasper National Park.

Grab a friend or family member, pack some snacks and your camera, and get ready to search for this phenomenon yourself, because it’s definitely worth seeing.

Big Rock is located on Alberta Highway 7 West, a 45-minute drive south of downtown Calgary, 10 minutes west of the town of Okotoks, and approximately 3.5 hours from Edmonton.

When travelling south on Highway 2, exit west on Highway 7, and follow the road until you see the erratic on your right. Plenty of parking and signage make your visit easy. 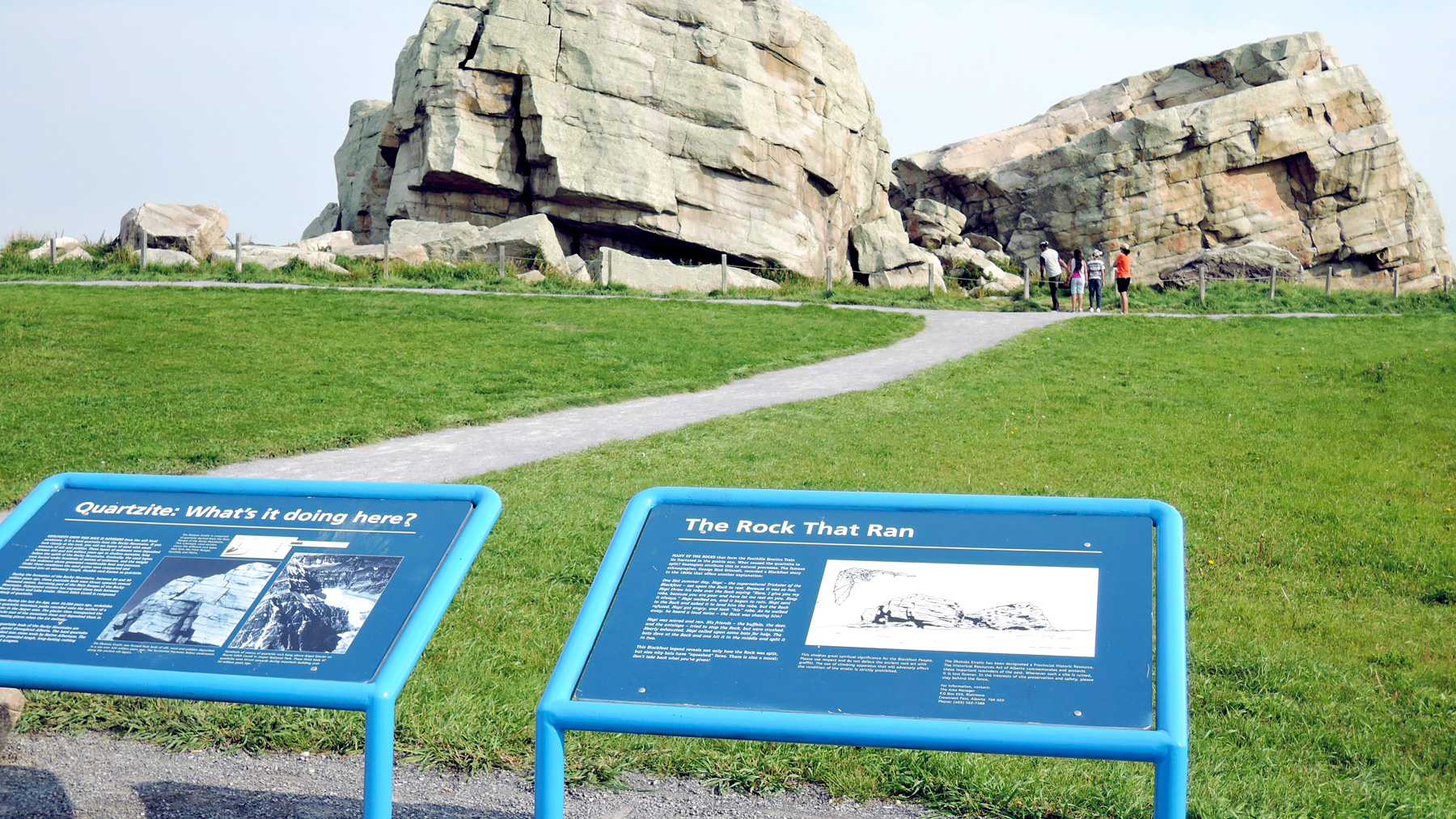 The Okotoks Erratic is highly visible in the middle of the relatively flat terrain of the surrounding prairies due to its large size (it’s nine metres tall, 41 metres long, and 18 metres wide – or about the size of a three-storey apartment building). 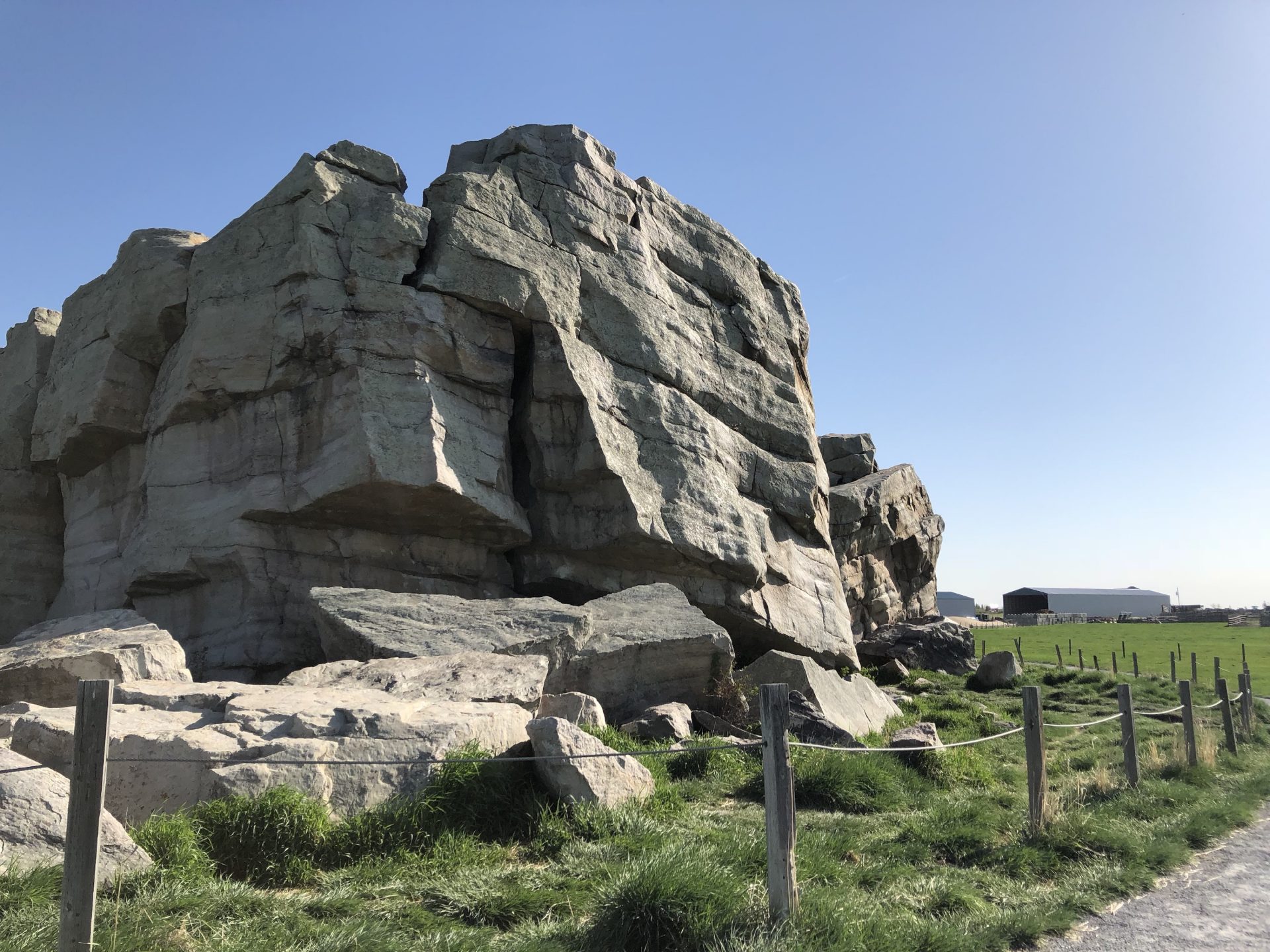 How did it get there?

According to the Government of Alberta, the gigantic boulder was transported from its original mountainous site to its present-day home in the Alberta prairies first by a rockslide, and then by a glacial sheet of ice. This occurred between 10,000 and 30,000 years ago.

During the last ice age, reads the provincial government’s website, a large rockslide crashed debris onto the surface of a glacier that occupied the present-day Athabasca River valley. This debris, including Big Rock, was carried away on the glacial surface. 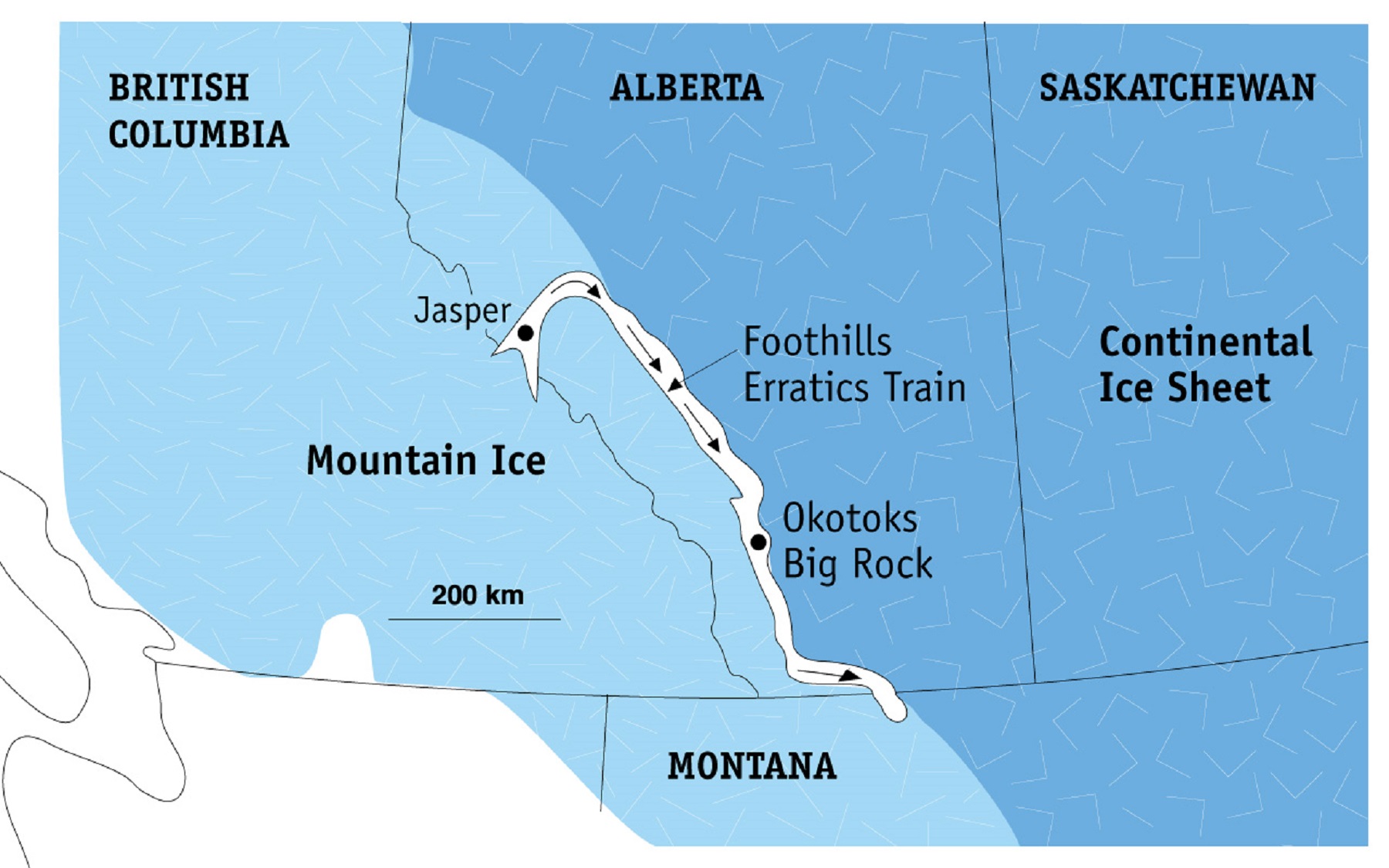 Later, when the glacier retreated to the mountains as the ice melted, the rocky debris was deposited across the prairies – although we haven’t heard of any other remnants quite as notable as Big Rock.

Where did its name come from?

The Indigenous name for the massive boulder comes from the Blackfoot word for “rock,” which is “okatok.” A traditional Blackfoot story describes how Big Rock came to feature a large split down its middle.

“One hot summer day,” reads the Alberta government’s website, “Napi, the supernatural trickster of the Blackfoot peoples, rested on the rock because the day was warm and he was tired.”

According to the story, Napi spread his robe on the rock, telling the rock to keep the robe in return for allowing him to rest there. 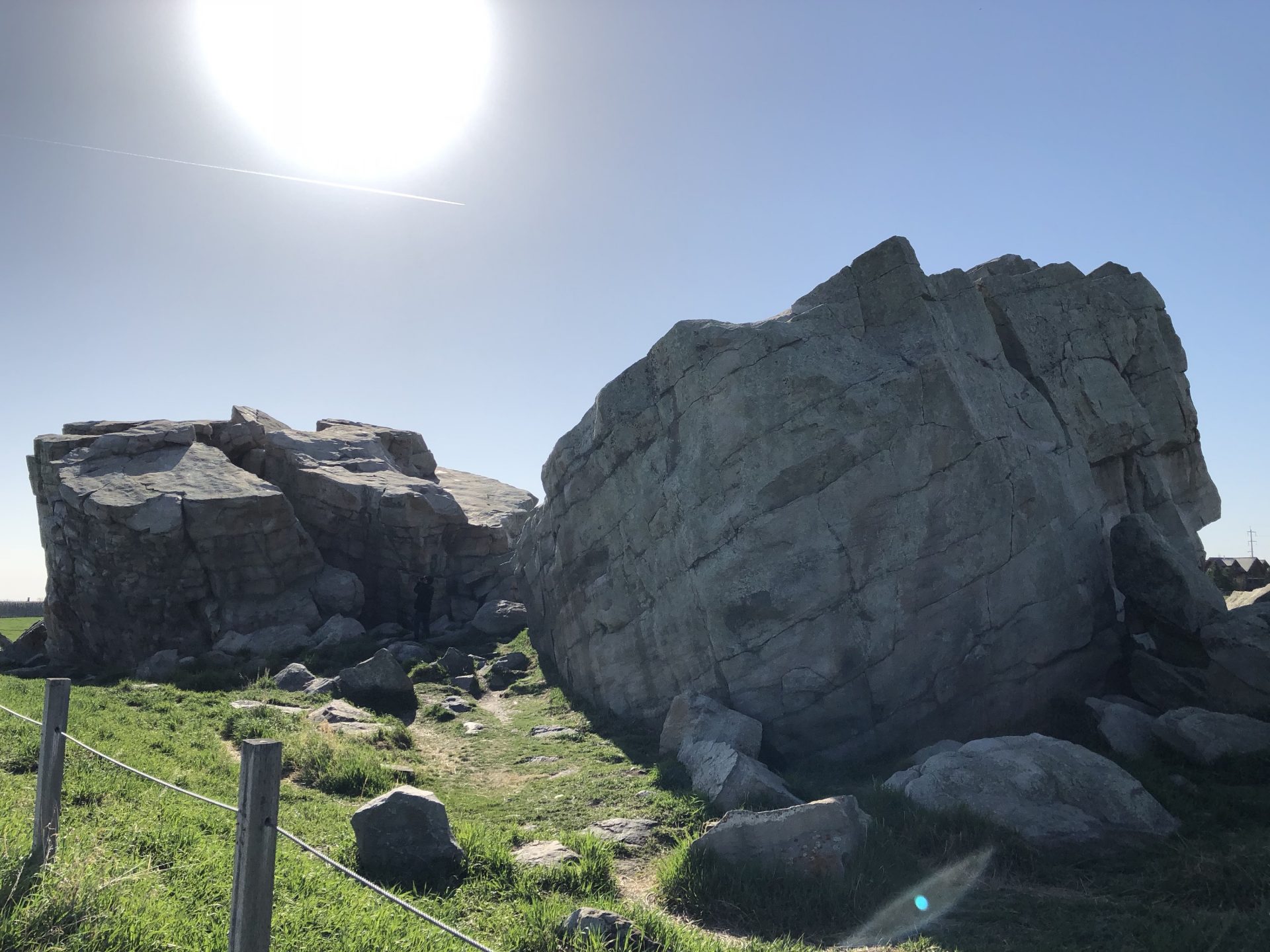 When the weather changed, Napi became cold and asked the rock to return his robe, but the rock refused – so Napi got mad and took the cloth back anyway.

“As he strolled away, he heard a loud noise and turning, he saw the rock was rolling after him,” continues the story. “Napi ran for his life. The deer, the bison and the pronghorn sheep were Napi’s friends, and they tried to stop the rock by running in front of it. The rock rolled over them. Napi’s last chance was to call on the bats for help.”

“Fortunately,” concludes the tale, “they did better than their hoofed neighbours did, and by diving at the rock and colliding with it, one of them finally hit the rock just right and it broke into two pieces.”

The erratic’s nickname, Big Rock, is a little more self-explanatory.

The Okotoks Erratic is made up of quartzite that ranges in colour from light grey to pink to purplish. “Quartzite is slippery to climb and although it is hard, pieces can break off,” warns the provincial government. “Enjoy the beautiful colours, textures and feel of the Big Rock, but stay on the ground.”

The Okotoks Erratic was deemed a Provincial Historic Resource in 1978 to protect its geological and cultural importance in Alberta.

So, the next time you’re driving in the prairies, keep your eyes peeled for this natural wonder, and be sure to stop and snap a few pics – the Okotoks Erratic is practically a local celebrity. After all, this enormous rock made its way all the way from Jasper National Park to southern Alberta without any help from us humans!