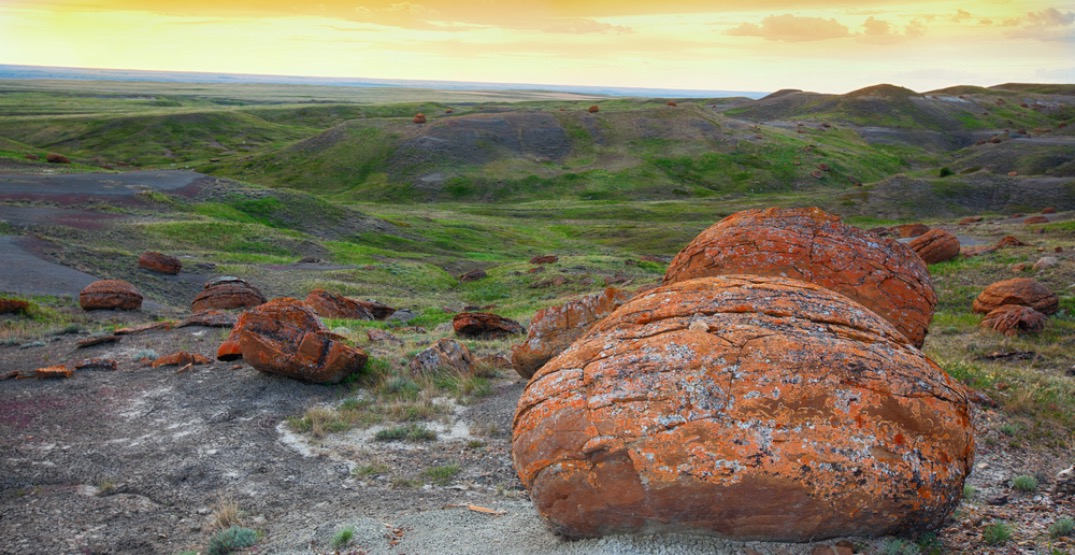 Ready to visit a natural wonder, right in our own backyard? A spot in Alberta is littered with massive red boulders, and it honestly looks like another planet.

It’s one of the most peculiar landscapes in the province and it can be found at the Red Rock Coulee natural area.

Where is it and why is it named that?

Located approximately 50 kilometres south of Medicine Hat, Red Rock contains large red spherical sandstone concretions that have eroded out of the softer bedrock and is considered the best example of spheroid rock formations in Alberta.

The boulders were formed in prehistoric seas as layers of sand, calcite and iron oxide collected around a nucleus formed by shells, leaves or bones.

Concretions measure up to 2.5 metres across and are believed to be among largest in the world, according to Alberta Parks. There are also hoodoos in the area, so get to some exploring down there why don’t you!

They kind of look like large dinosaur eggs or alien pods that are starting to fall apart, it’s just downright fascinating and a little bizarre!

Some concretions are split in half, broken into bits or beginning to crack up. If you look closely and you might see “growth rings” (layers of sediment deposition) and fossilized shells, leaves, and bones. Time to put on your palaeontologist hat and get a good look at it all!

So if you are seeking a truly out of this world landscape, head down to Red Rock Coulee to pose beside and admire the massive boulders in southern Alberta. It’s worth the drive!