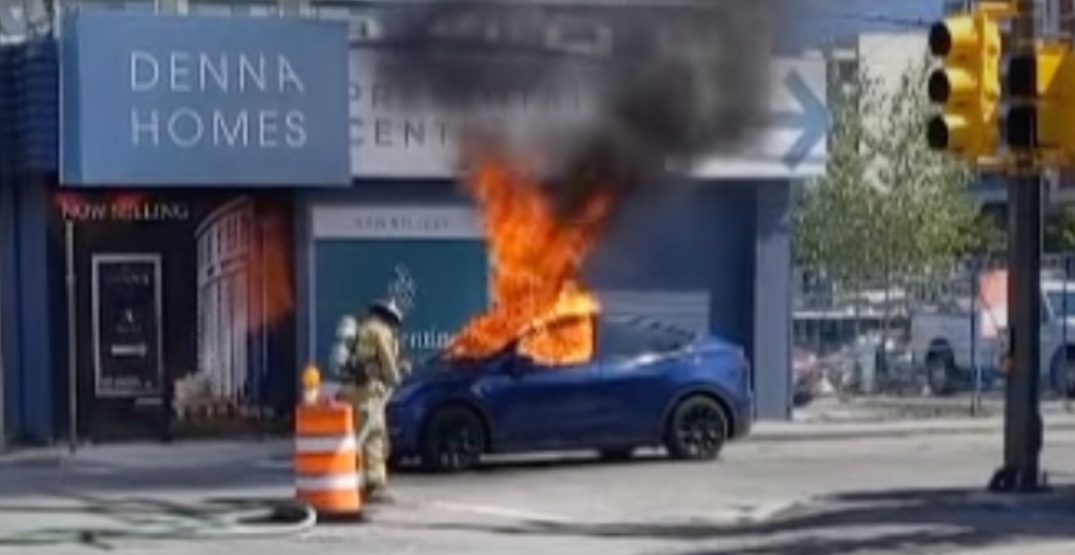 A Tesla driver in Metro Vancouver is lucky to be alive after they got trapped in their Tesla moments before it burst into flames.

Daily Hive spoke with James Lester, an owner and distiller at Sons of Vancouver about the incident which took place on May 20, at the intersection of Hunter Street and Mountain Highway in North Vancouver near the Iron Workers Memorial Bridge.

Lester said he was walking to work at around 10 am when he saw a blue Tesla with a broken window blocking the intersection.

“The driver told me the car powered down and shifted into park as he stopped at the intersection,” Lester said, and that’s when he started filming.

“My car just started going into flames, not flames but it’s smoking up, my battery died on my Tesla and I don’t know what happened,” the driver said.

“I kicked through the window because everything stopped. The power didn’t work, the door didn’t open, the windows didn’t go down…I need to get the f**k out of this car,” the driver said. “This is 2021. Brand new, man,”

In the video, at first, the car is just smoking. Then, it catches fire. You can watch the saga below:

Fire Chief Brian Hutchinson from the District of North Vancouver Fire & Rescue Services told Daily Hive that on the morning of May 20th, they responded to a call of a Tesla Model Y that caught on fire.

“The driver…had difficulties exiting the vehicle and was forced to kick the driver’s side window out. There is a manual release, but in the heat of the incident, that wasn’t intuitive to him and he kicked the window out and was able to escape and within a couple of minutes the vehicle did become fully engulfed in fire.”

In the video, the driver and Lester are concerned about how long the fire department is taking to arrive since there’s a fire station nearby.

Fire & Rescue services said that just because there’s a fire station around the corner doesn’t mean that they’ll be the ones to respond to a call depending on the day’s operations.

Crews arrived on the scene within minutes and put out the fire partly with special fire blankets – a technology suited to electrical vehicle fires. Now, investigators will look at determining the cause of the fire.

Thankfully the fire’s only casualty was their beers and golf clubs.

“If this was my grandmother trapped in her car it would have ended very differently and that’s the point the driver would like people to appreciate,” said Lester.

Lester also pointed out that “Elon Musk moon boys are defending this to the death,” as his partner posted a photo of the incident on Twitter that’s being torn apart as people accuse the photo of being faked. “It’s rather troubling,” said Lester.