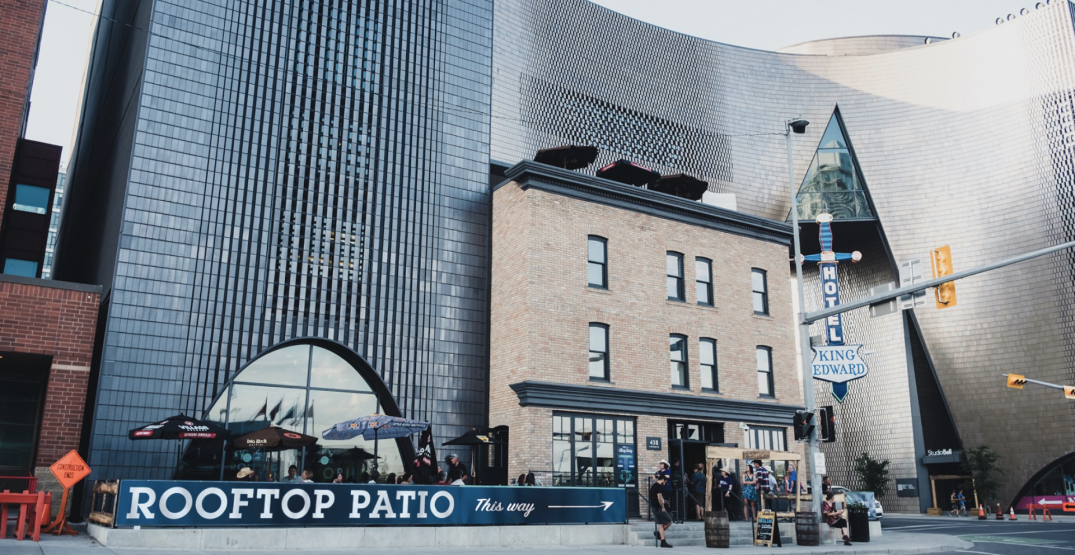 Good news, YYC: another patio is opening for Calgarians to enjoy a beverage under the sun, and it’s going to offer epic rooftop views.

For the first time ever, the National Music Centre (NMC) is opening the patio at the King Eddy for dining and drinking outside for just 10 days in July.

Previously, King Eddy’s patio had only been open to the public during the Stampede; however, they announced on Wednesday that the venue would soon be accessible for three seasons of the year.

According to a press release from NMC, the rooftop patio will have a “special food and drink menu,” and will feature live music beginning later this summer.

Launching on July 1, in time for NMC’s fifth anniversary, Canada Day, and the Stampede, the King Eddy Rooftop will be an open-air hotspot in the heart of Calgary’s East Village, serving up cold beverages, street food-style bites, and live music.

“The King Eddy’s rooftop construction is a capstone project to mark the five-year anniversary of Studio Bell’s opening in 2016,” said Andrew Mosker, President and CEO, National Music Centre. “The newly upgraded space will offer greater seasonal access to the rooftop and provide another safe outdoor space for people to gather.”

For those who like to sip drinks on patios no matter the weather, the King Eddy Rooftop will be open for three seasons of the year.

The venue has been outfitted with a large pergola with a retractable awning, allowing the rooftop to be enjoyed throughout the spring, summer, and fall, while also allowing plenty of outside airflow.

“Comfort and safety were top of mind when we were imagining the updated outdoor space,” said Restaurant Manager Gabrielle Vanderwerff. “There are very few covered rooftops in the city that are accessible for three seasons. We’re thrilled to open up this incredible rooftop terrace for Calgarians and out-of-towners to enjoy.”

The structural design of the rooftop pays homage to the architecture of the early 1900s, when the King Eddy was built.

Those lucky enough to grab a spot in the evening will be treated to live shows for Happy Hour during the Calgary Stampede, not to mention some incredible views. Music lovers can check out a list of upcoming rooftop concerts on King Eddy’s website.

Starting July 1, the King Eddy Rooftop will be open Fridays and Saturdays from 11 am to 11 pm and Sundays from noon to 7 pm. Live shows are expected to kick off by the second week of July.

Rumour has it, there’s a pretty good view of the Calgary Stampede fireworks from the patio too.

Calgarians love patios, and bonus points if it’s on a rooftop, so this announcement comes as a welcome addition to our summer bucket list!