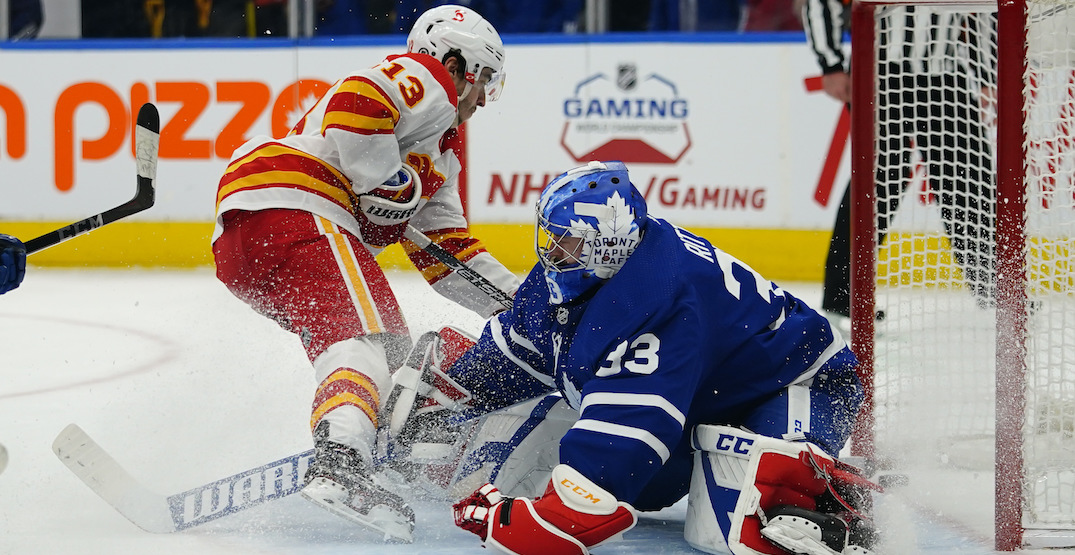 There were plenty of awkward moments for former Calgary Flames goalie David Rittich on Tuesday, as he played his old team in his first game for the Toronto Maple Leaf.

The awkwardness began on the flight into Toronto, as Rittich flew on the Flames charter with his suddenly ex-teammates to avoid having to quarantine.

“It was ok, a lot of chirps there,” Rittich said. “Some guys didn’t hold back, so I expect that. At least I had a chance to say goodbye to all of them.”

Everything happened so fast that the Czech goaltender only had time to place blue tape on the front of his red pads. You could still see the Flames red on the back of them.

Big Save Dave hits the ice with the @MapleLeafs for the first time. 👀 #NHLonSN pic.twitter.com/6Ha3I83MmG

Rittich stopped 25 of 28 shots, but the Leafs lost the game in overtime, with Johnny Gaudreau potting the winner.

“Obviously it was a tough one, right?” Rittich said after the game. “I played against my old team where I was for four years and I’ve got some life friends there. So it was a tough one. The even worse thing of it is we lost in overtime.”

For a moment, Rittich said he forgot which team he was on. He plays for the blue team now.

“[The strangest moment came] in the first period when I got scared of a player in a blue jersey,” Rittich added. “That was probably the weirdest thing that could happen to me.”

If you thought Rittich’s former teammates would take it easy on him, you thought wrong — well, at least concerning Matthew Tkachuk.

Rittich gives Tkachuk a jab after the snow shower

Rittich gave it right back to them though.

“I’ve sat next to [Rittich] in our locker room in Calgary and mostly on the road since he’s been with the Flames,” Gaudreau said. “It was a sad day to see him and [Sam Bennett] go. Two great teammates and good friends and guys we’ve played with for awhile.”

Meanwhile, Big Save Dave’s new Leafs teammates are happy to have him on board.

“[Rittich’s] been great. Loves to chat,” John Tavares said. “Very talkative in the room early on and settling in nicely.

“I mean that’s quite the circumstances in the last 48 hours for him.”