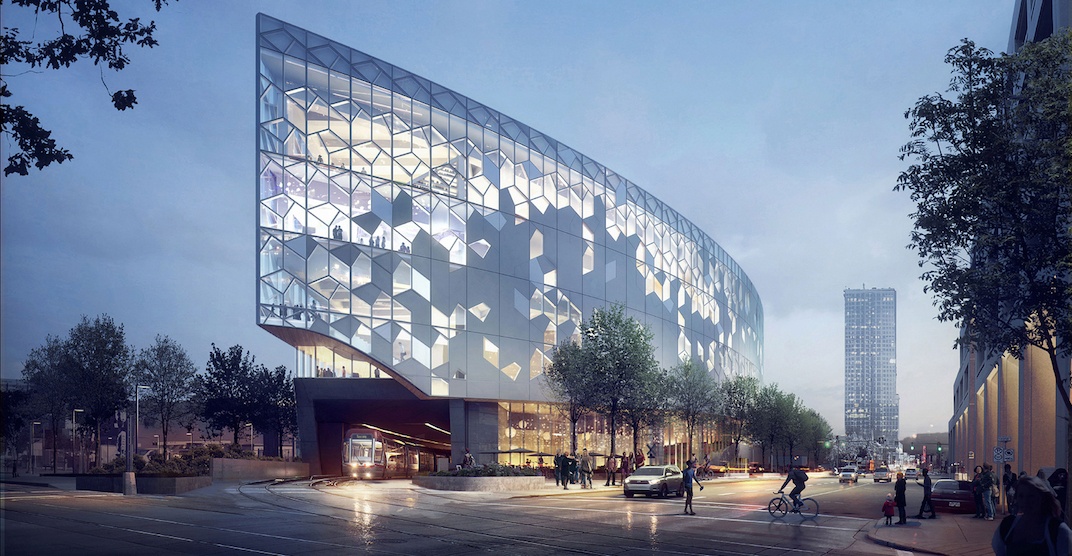 Rendering of the New Central Library (City of Calgary)

New Central Library may already look like a work of art from the outside, but it’ll be just as visually pleasing once you walk through the front doors.

According to a release from Calgary Public Library, there will be four pieces of Indigenous artwork throughout three spaces in the soon to be opened building.

Ther artwork will be from six artists either from, or with connections to, the Treaty 7 territory, including a massive wall mural at the library’s main entrance. The mural will be created in a collaborated effort by artists Keegan Starlight, Kalum Teke Dan, and Roland Rollinmud.

The stairs leading up to the mezzanine level of the library will feature a life-sized buffalo sculpture made by Lionel Peyachew. The sculpture will be created out of metal letters that spell words in Indigenous languages.

The fourth level will be home to an Elders’ Guidance Circle, which will be furnished with a table and other furniture created by Glenna Cardinal, as well as a large photo from Brittney Bear Hat.

“I’m pleased to be a part of this important initiative with the Calgary Public Library,” said Bear Hat in the release.

“For myself, this project brings me a step closer to uncovering my family’s heritage and understanding of our history through storytelling. I am creating a project that is about reminiscing and focusing on the care that reveals itself in the moments that are shared between family members.”

All four pieces will be permanent fixtures in the new library and are part of a $500,000 Indigenous Placemaking project, which has been funded by the Calgary Public Library Foundation.

This joins the $2 million in public artwork that has been commissioned by lead developer Calgary Municipal Land Corporation, which is currently being installed both inside and outside the building.

“Calgary Public Library knows that a public library is about more than just providing access to books; it’s about creating public gathering spaces where people can connect with one another and share ideas, knowledge, stories, and culture,” said Shereen Samuels, the Vice Chair of the Calgary Public Library Board, in the release.

“Indigenous Placemaking at New Central Library will create a welcoming environment where Indigenous people can feel their culture reflected in an urban setting and where all Library visitors can learn about the original inhabitants of the land that we also call Calgary.”

While the four pieces will be available for viewing when the library is first opened on November 1, there are plans to include more Indigenous artwork throughout in 2019.