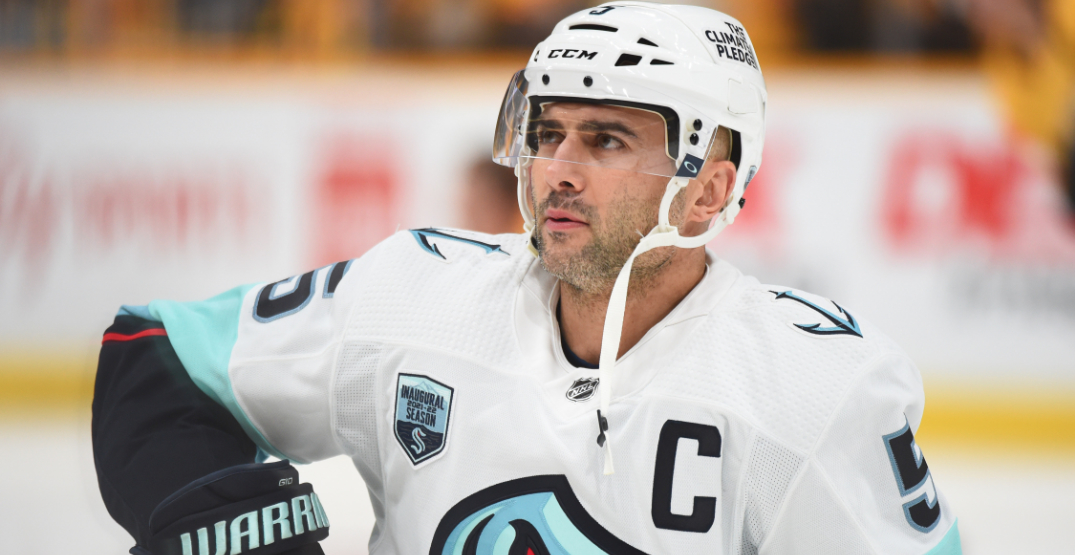 A return to the Calgary Flames for longtime captain Mark Giordano isn’t something his agent is willing to rule out.

In an interview on The Eric Francis Show on Sportsnet 960, Rich Winter called an eventual Giordano-Flames reunion as early as the NHL Trade Deadline a “possibility.”

“Coach loves him. Player loves the coach. Player has a home in the city. The team seems to be playing much better. I think there could be an argument that a guy like Gio, with a little more offence, could really add to the mix,” Winter said on the radio hit.

“But that’s not something we control.”

Any move would be in the hands of Flames general manager Brad Treliving and the Seattle Kraken’s Francis.

Giordano, who had played his entire 15-season career with the Flames after signing as an undrafted free agent in 2004, was claimed by the Kraken in the 2021 NHL Expansion Draft on July 21 and was named the franchise’s first captain in October.

“Calgary has got to be a possibility,” Winter said. “I know from Gio’s perspective, obviously his entire adult life has been lived in the city of Calgary, where he counts most of his friends, many who are teammates. I gotta think he’d be excited about it.

“Brad and I talked a lot about [Giordano] over the course of the summer. He certainly did not want to lose him, and I think that his feelings won’t have changed.”

He also led Calgary in ice time per game in seven of the past eight seasons, including last season at age 37.

“Ron Francis made it very clear in his pursuit of Mark over the course of the time pursuing the expansion draft that he wanted him on his team,” Winter said.

“I would think there’s a possibility. You look at the landscape. There’s not a lot of teams that have the need for a veteran player like Gio, have the cap room, and actually could see the acquisition of Mark as a feather in their cap as they move forward to try to challenge for a Stanley Cup or get considerably further in the playoffs then they have in the past.

“Brad and I talked about this a lot over the course of the summer. He certainly didn’t want to lose [Giordano], and I think that his feelings won’t have changed. Now, whether he can acquire him? It’s really hard to say. It’s going to depend on, like every trade deadline.

“It’s really hard to say. That’s a decision ultimately Ron Francis has to make. So we’ll see. But Calgary has got to be a possibility. I know from Gio’s perspective, obviously his entire adult life has been lived in the city of Calgary where he counts most of his friends, many who are teammates…I gotta think he’d be excited about it.”

Should a reunion at the trade deadline fall short, Giordano is a pending unrestricted free agent this offseason.

That could serve as another eventual path to a return to Calgary.

“I think he’s indicated for a long period of time he has no interest in hanging them up,” Winter said. “He’s playing among his best hockey despite the fact the production is not there. The team’s not producing at the same levels the Flames were when he was playing here, but he’s played well and I think teams recognize that.”