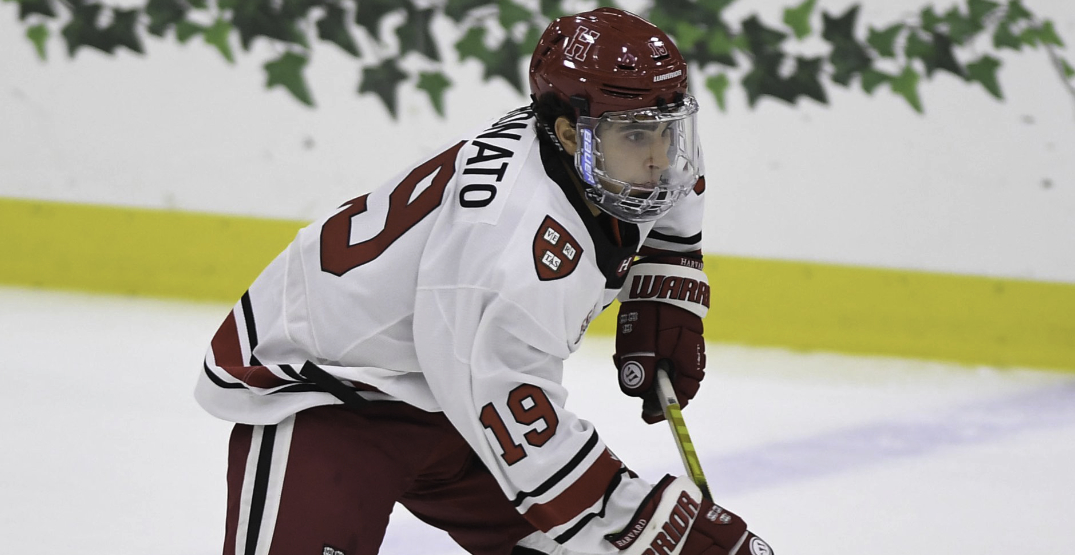 The World Juniors are just around the corner.

And it’s worth piquing the interest of Calgary Flames fans.

There are a few candidates Flames fans can track who are projected, or at least have a chance to represent their countries at this year’s World Juniors in Edmonton and Red Deer, which begins on Boxing Day.

It could make the holiday season just a little sweeter.

Matt Coronato, arguably the top prospect in Calgary’s organization, is a virtual lock to suit up for the stars and stripes this season. He was named to Team USA’s National Junior Team Preliminary Roster on Tuesday.

Coronato torched the United States Hockey League last season with 85 points (48G, 37A) in 51 games with the Chicago Steel prior to the Flames selecting him in the first round last July. He’s continued that strong play as a freshman at Harvard with 10 points (4G, 6A) in nine games. He’s 15th overall in ECAC scoring, and fourth overall in points-per-game among all Division I freshmen.

Matthew Coronato takes on the whole Bentley team and scores. 7-2 Harvard! What a goal!! @espn #GoCrimson

Yan Kuznetsov will very likely earn a second go-round with Russia at the World Juniors, too, after being a member of the club that lost to Finland in the bronze-medal game to finish fourth in last year’s tournament.

Kuznetsov, who has represented Russia at multiple other events as well, is still looking for his first professional point with the Stockton Heat — Calgary’s American Hockey League affiliate. Offence isn’t necessarily the game of the 6-4, 215-pound defenceman. It’s his steady, stay-at-home presence that keeps him on the international stage.

William Stromgren, who turned 18 in June, isn’t as natural a fit on Sweden’s World Junior roster as Kuznetsov with Russia or Coronato with Team USA, but he’s on the radar.

The speedy winger has had a productive start in J20 Nationell, posting 22 points (8G, 14A) in 24 games with Rogle. He hasn’t had the professional look that he had when he netted nine points (3G, 6A) in 27 games with MoDo in HockeyAllsvenskan in his draft year, but there’s a slim chance Stromgren could crack Sweden’s roster in a spare/depth role after Calgary plucked him 45th overall last July.

William Strömgren scored a PP goal yesterday for Rögle BK’s J20 team. He is off to a good start with 6 points (2g + 4a) in 7 games. #Flames #CofRed pic.twitter.com/lrcIUDYQFS

Russian goaltender Arseni Sergeev is an even longer shot despite an incredible start with the Tri-City Storm in the United States Hockey League. Sergeev is pacing the league in goals-against average (1.25), save percentage (.949) and wins (11) in his first 12 games. Russia has some depth in goaltending, but Sergeev, the No. 205 pick in 2021, has been almost unbeatable in USHL action this season.

For the second time in three weeks, the @USHL goaltender of the week, Arsenii Sergeev!#StormAhead⚡️ pic.twitter.com/RwlMkM6vJI

There were hopes that another Flames prospect could make his mark at the tournament.

Or at least get the opportunity to compete for a spot.

Rory Kerins, a sixth-round pick in 2020, will not represent Canada at the event despite a strong start to the season with 32 points (11G, 21A) in 21 games with the Sault Ste. Marie Greyhounds. Kerins wasn’t on Canada’s National Junior Team Selection Camp roster.

This @NHLFlames pick is a blazing inferno right now!@OHLHoundPower's Rory Kerins (@kerinssy23) with his first career hat-trick, vaulting him into the #OHL scoring lead with 10 points in his last two games 🔥 pic.twitter.com/S3UZSwa63K