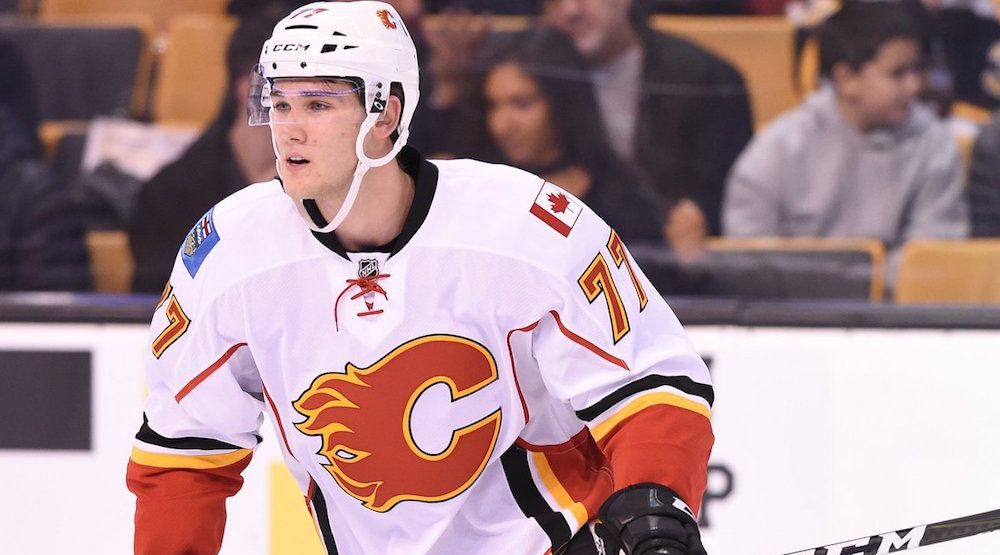 When Jay Feaster stepped up to the microphone at the 2012 NHL Draft in Pittsburgh and selected Mark Jankowski from Stanstead College, a collective “who?” rang out across the hockey universe.

An off the board pick to say the least, Jankowski was rated 43rd among North American skaters by NHL Central Scouting in 2012.

But the Calgary Flames saw something special in Jankowski, with Feaster even claiming former assistant GM John Weisbrod told him, “Ten years from now, he’s going to be talked about as the best player in this draft.”

Fast forward five years, and Jankowski is coming off his first full season of professional hockey with the AHL’s Stockton Heat.

With the centreman set to turn 23 this September, the time is now for the Flames to finally give Jankowski a shot at cracking the NHL squad, even if that means pushing a few players down the depth chart.

The term ‘project player’ gets thrown around quite a bit in the NHL, usually for players who take more than the usual two years of development to get a sniff at the big leagues.

If that’s true, then Jankowski is one of the longest project players in recent history.

After graduating in 2016, Jankowski made his pro debut with the Heat for an eight game run, scoring two goals and six points during that time.

Last year was a breakout season for the Dundas, Ontario native, leading the Heat in scoring during his rookie year with 27 goals and 56 points in 64 games, and was also named to the 2017 AHL All-Star Game.

Jankowski’s biggest accomplishment last year might have come on November 28 though, as he finally made his NHL debut in Brooklyn, New York against the Islanders.

Despite playing just over 10 minutes without any contributions on the scoresheet, Jankowski became the final first round pick from 2012 to make his NHL debut.

Using that confidence paired with a few successful training camps under his belt, it’s finally time for him to make the jump to the Flames.

Size was an issue when Jankowski was drafted in 2012 as he stood at six-foot-two and 168 pounds, and really needed to bulk up over his college career.

However, when Jankowski laced up for Calgary last November he had grown another two inches and is now at over 200 pounds.

"I've dreamt of it ever since I could remember … the first few shifts, it was a little bit surreal." – Mark Jankowski on his #NHL debut

That extra muscle showed in his rookie season in the AHL, as he was one of the more impressive first-year players in the league and only missed a handful of games for the Heat.

This fall is also Jankowski’s best shot at cracking the Flames’ lineup, as he doesn’t have a lot of competition when it comes to other rookies ready to make the jump.

When it comes to forwards, Emile Poirier and Hunter Shinkaruk are the only other contenders to grab an NHL job, and I would put Jankowski ahead of both those players.

The Flames have also had no issues injected rookies into their lineup frequently over the last few years.

If history is set to repeat in 2017-18, the Flames will likely promote a rookie and keep them around for the entire season, and chances are that will be Jankowski.

The major hurdle that Jankowski will have to deal with would be limited time at the centre position with Calgary.

Monahan, Bennett, Mikael Backlund, and Matt Stajan currently slot in as the Flames’ options at centre, and it would take a monster rookie performance from Jankowski to dethrone any of them.

The most likely solution would be to start Jankowski on left wing to begin the season with Stajan and either Curtis Lazar or Freddie Hamilton as his linemates.

For those asking me: Mark Jankowski has played LW in the past (in first two years of college off and on). #Flames

He’s had previous experience at that position with Providence College, and could be an easier transition into the NHL instead of taking faceoffs and directing traffic every night at centre.

Another year in the AHL is certainly an option for Jankowski, but with five years of development now under his belt, it’s important that the Flames make a decision on his future this fall.

If Jankowski is going to be the best player to come out of the 2012 Draft as Weisbrod once proclaimed, the Flames need to give him some reps with the big team at some point.

And, with an excellent professional debut last year and little competition going into camp, there’s no better time for Jankowski to justify his first round selection.