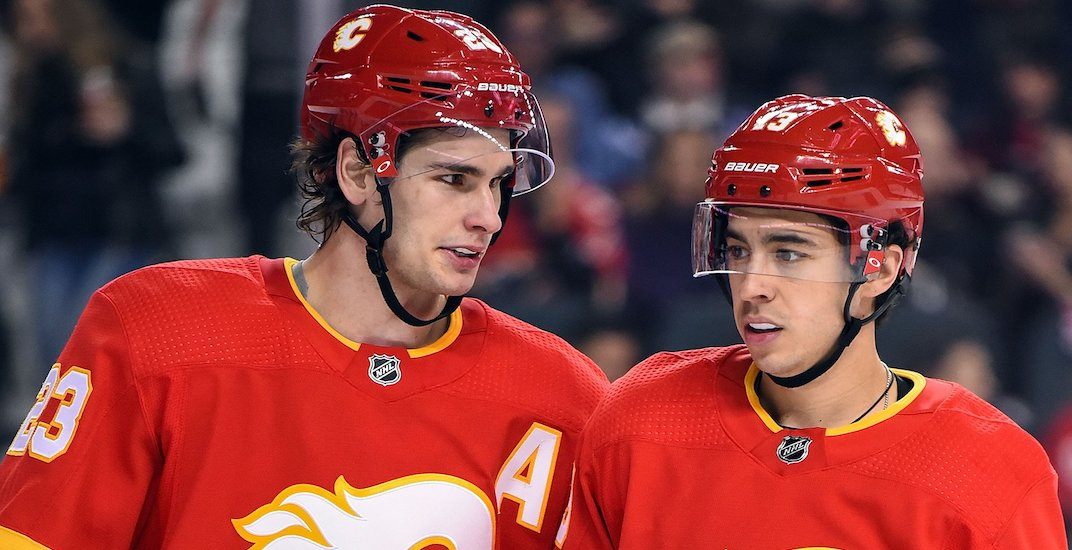 It’s a relatively small number, especially when put into context against the hundreds of players who suit up in the National Hockey League every year.

But, that’s how many players get the chance to anchor a top line in the Stanley Cup Playoffs. To be tasked with attacking the best defencemen in the league, to play the hardest minutes, and to be counted on to drive a team’s offence in the most crucial games of the season.

The old adage of ‘you need your best players in the post-season’ is one that can get tired this time of year, but there’s a nugget of truth in getting the most out of your stars when it counts.

For 82 regular season games Johnny Gaudreau and Sean Monahan were that for the Calgary Flames, but have since fallen deafly silent in their opening round series against Colorado.

Completely taken out of the play by the Avalanche over much of the four game series, the Flames dynamic duo have been vastly outplayed by Colorado’s three-headed monster of Nathan MacKinnon, Mikko Rantanen, and Gabriel Landeskog.

There’s your difference. Your best players have to be the best. The Flames best aren’t even close.

As Calgary prepares for their biggest night of the year in what could be their final game of the season, the Flames’ missing persons search for their two stars needs to come to an end.

Throughout the regular season, Gaudreau was a consistent threat from anywhere in the offensive zone to get a puck through to a goaltender.

Gaudreau finished tied for 21st in shots in 82 games with Winnipeg’s Patrik Laine with 245 attempts, with 36 of those lighting the lamp to set a career high in goals.

In four playoff games, Gaudreau sits outside the top-40 shot producers in the NHL with 12 attempts in four games, while he had just five shots on the road in Games 3 and 4.

Unless Sean Monahan and Johnny Gaudreau dig in and create things offensively, this team doesn’t have much of a chance. Especially Gaudreau… he’s the driver and needs to continue being that in the most crucial time of the season. #Flames

In a Game 4 overtime battle to decide who will be facing elimination, the Flames pint-sized star was only able to get two shots on goal and still is waiting for his first of the playoffs.

Monahan has been slightly more successful with a goal in Game 2, but hasn’t been able to generate his normal offensive production with an average of 2.5 shots per game.

“We need more pucks to the net, we need more bodies there too,” said Monahan. “I think their goalie is playing well. So, I think everyone has got to step up and we got to find a way to put the puck in the back of the net.”

Contrast that with 13 combined points from the MacKinnon, Rantanen, Landeskog line, and the Flames stars need to just throw what they can on Philipp Grubauer to get momentum going again.

Something that Gaudreau has struggled with most over the first four games against the Avalanche has been buying himself time and space on the ice.

Usually one of the most reliable players to create distance with defenders crossing the blue line, Gaudreau has had issues separating himself from opposing defenders.

Whether that’s been getting stood up at the blue line or getting the puck knocked off his stick along the boards, it’s been a rough go for Gaudreau in the attacking end.

Zone entries are one thing, what you do with them is another and through 3 games, Nathan MacKinnon's have been much better than Johnny Gaudreau's. https://t.co/F9EjWs1QJS

If Gaudreau is able to use his speed and shifty play to buy himself some more room on the ice, it could lead to an increase in shot attempts as well.

Monahan doesn’t have the same wheels as Gaudreau, but he has also struggled in getting space in the slot to bang home rebounds and find clean looks on Grubauer.

Speaking to Calgary media on Thursday, head coach Bill Peters said his top line and the rest of his offensive players need to step up in Game 5.

“We need more out of everybody,” said Peters. “We haven’t scored enough, we’ve given up too many chances. You guys like to whittle it down to individuals, we don’t. We’re going to win and we’re going to lose as a team, and we need more across the board.”

Colorado has done an outstanding job in defending against Gaudreau and Monahan on the rush, and Calgary will need their stars to become more unpredictable in Friday’s elimination Game 5.

One of the reasons Colorado has been able to generate an average of over 40 shots per game this series has been Calgary’s unwillingness to defend on the back check.

Both Gaudreau and Monahan have been far too passive returning to the defensive zone, and have been hanging their defencemen out to dry far too often.

Calgary has been burned on a number of odd-man rushes over the last three games especially, as Gaudreau and Monahan were a combined minus-four in the Flames 6-2 loss in Game 3.

That has been exacerbated by weak puck management from Calgary’s defence this series, something that Colorado has had no issue exploiting.

The Avalanche have also been quite successful with the drop pass off the rush, something that could be remedied by Calgary’s forwards taking a little more defensive responsibility.

Monahan has garnered a reputation as one of the NHL’s most reliable two-way centres and will need to get back to form to keep Calgary’s season alive on Friday.