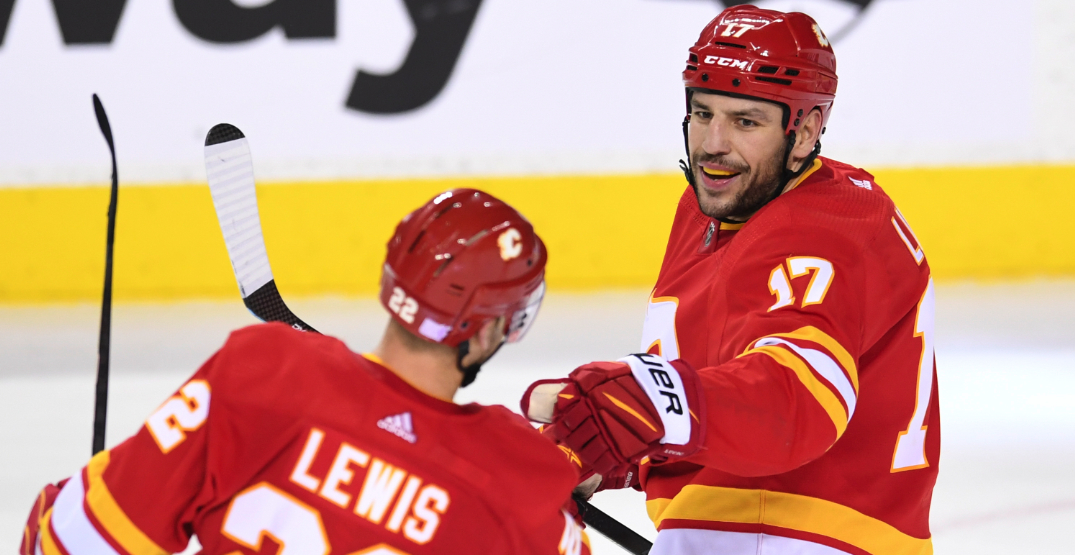 The combination of Milan Lucic, Trevor Lewis, and Brad Richardson has been a stabilizing presence both on the ice and in the locker room for the Calgary Flames.

And as good as they’ve been at times as Calgary’s fourth line, their newly anointed “full pension line” moniker might be better.

“Pretty good nickname, I guess,” Lewis told media Thursday. “I don’t know how they came up with that one, but it was good.”

"My buddies call us the full pension line. Which I thought was pretty funny."

Brad Richardson checks in with the media to discuss tonight's game and the nickname given for his line alongside Lucic and Lewis. pic.twitter.com/DejzKlxB2d

O’Brien, a veteran of 537 NHL games over parts of nine seasons and now a co-host of the Missin’ Curfew podcast, has dubbed the trio with the pension punch-line.

The premise is surprisingly simple.

A player is eligible to receive their full NHL service pension after they have been in the league for 10 years and have received 82 games per season for pension purposes (games for the 2019-20 season were grossed up by a factor of 1.21).

A player is “credited for all NHL regular season games for which he is on the active roster, injured reserve list, injured non-roster, or has been designated non-roster,” per the Collective Bargaining Agreement.

Players that qualify will receive the maximum pension benefit, currently $255,000 per year, and are eligible to collect the full amount one month after their 62nd birthday. An earlier withdrawal date, starting as soon as one month after a player’s 45th birthday, is available at a reduced rate.

Rasmus Kupari gets swarmed by "The Pension Line" after going down pretty quick from a Looch slash #flames | #GoKingsGo
🎥: @BallySportWest pic.twitter.com/aBbHwWo4hx

“One of my buddies called us the full pension line, which I thought was pretty funny,” Richardson said of O’Brien. “I was laughing.”

Not a great ring to it, mind you.

But lots of rings on it, nonetheless.

Lucic has a Stanley Cup championship with the 2011 Boston Bruins. Lewis has two more trophies to add to his mantle, with the Los Angeles Kings in 2012 and 2014. Richardson was a member of the Kings’ 2012 Cup winning team alongside Lewis.

“It’s great,” Richardson said. “We have a lot of fun. We’re close friends. I’ve played with Lewy before, and it’s just fun. It’s the guys I enjoy playing with. We all bring a little bit different stuff, but I just enjoy it.

The Full Pension Line getting us started 💪#Flames | @Schneiders pic.twitter.com/jMc6fLXo7s

They’ve found some moderate success this season, too. Collectively, the line has accumulated 11 goals and five assists, with Lucic carrying the bulk of the scoring with seven goals.

But it goes well beyond statistics, according to the skipper.

“It doesn’t bother them who scores or who doesn’t,” Calgary coach Darryl Sutter said in late November. “It’s about winning. It just tells you about those guys that have won championships, too.

“I think it’s still filtering through our team for sure… You can see tonight, the experience from our older guys is really important.”