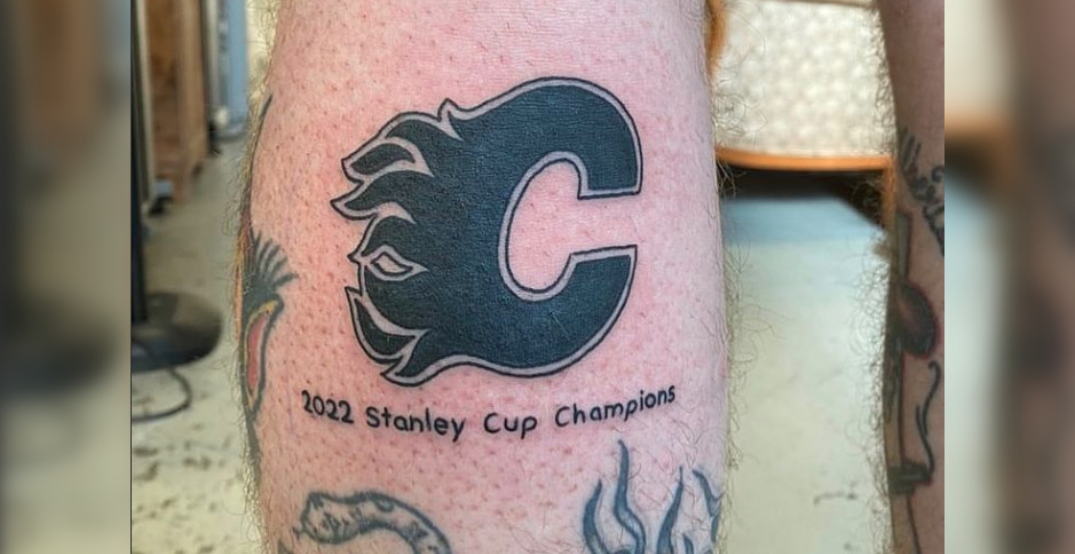 This goes a little above putting your money where your mouth is.

Eric McComish, an obvious die-hard Calgary Flames fan, most definitely has some skin in the game.

McComish commissioned local Blackbird Electric Tattoo artist Max Gerchikov to ink up a Flames logo along with a bold prediction for the season: 2022 Stanley Cup Champions.

“It’s funny, because I honestly have thought about getting this tattoo every year for five years, and I decided this year,” McComish said on Virgin Radio 98.5 on Thursday. “I was like, ‘we’re off to a good start, let’s pull the trigger,’ so I got it. It’s been crazy. It’s been a crazy couple days with how viral it’s gone.

“I honestly thought it would only be a couple pages in Calgary that reposted it, but it went off yesterday for sure. I had to stop reading the comments for my own sanity. I was getting roasted by thousands of people, and I was like, ‘I’m done, I can’t do it.'”

McComish has received over 500 likes and 100 comments on his Instagram post, published on November 3, depicting the bold prediction.

Reaction to the tattoo, he admitted, has been “pretty standard” from friends and family.

“I have some pretty crazy tattoos, so they all just kind of take it at face value,” McComish said. “They’re used to it. A lot of people texted me last night though after we lost and said I jinxed the team.”

The Flames ended a 10-game point streak on November 9, and have now suffered back-to-back losses after a 4-2 defeat against the Montreal Canadiens on Thursday.

Calgary has one Stanley Cup to its credit, from back in 1989.

McComish, clearly, is betting on another this spring.