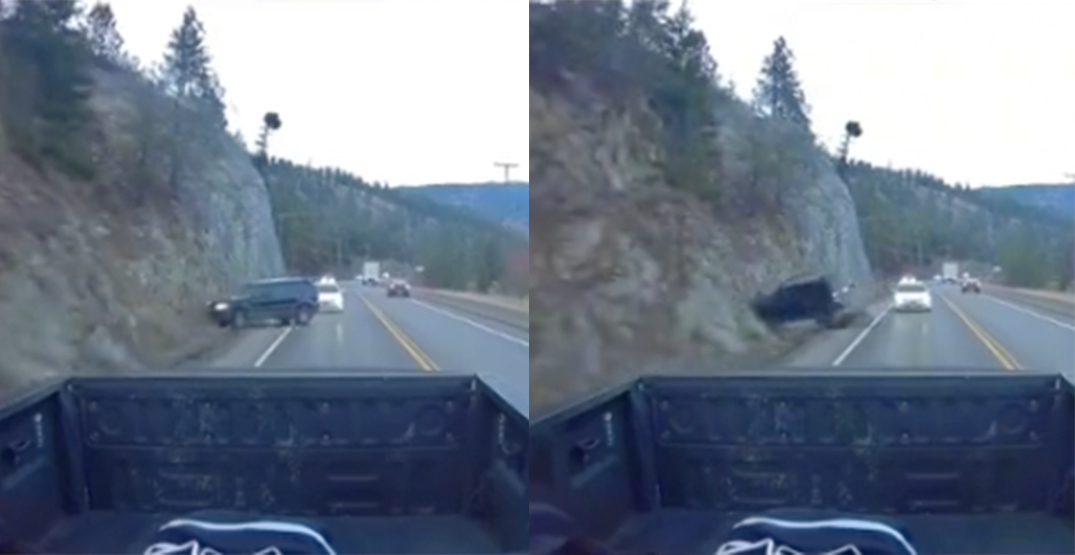 An SUV driver fleeing police crashed head-on into a rock face in BC’s Interior last week, and part of the frightening chase was captured on video.

It all started during an afternoon traffic stop on Highway 97 near Peachland, BC, on November 26, when a Kelowna highway patrol officer signalled for the driver to pull over.

The driver ignored the officer’s attempts to wave him down and kept going, according to a police news release.

The officer got in his car and followed the SUV, which by now was quite a distance ahead.

Video of the chase shared by TikTok user @desiprotruckerpb09 shows the SUV crossing a double yellow line to swerve around a car in front of it, barely avoiding a head-on collision with an oncoming transport truck.

But the driver overcorrects after that maneuver, and the SUV’s nose crashes into the mountainside flanking the highway.

The vehicle bursts backwards from the force of impact and spins back onto the highway forcing other oncoming vehicles to stop.

After that, police say the driver got out and tried to run away. He didn’t make it far, was arrested, and taken to hospital to treat his injuries from the collision. The man was already known to the police.

Police say the driver could face criminal charges for failing to stop for police, dangerously operating a vehicle, prohibited driving, and possession of the stolen property.