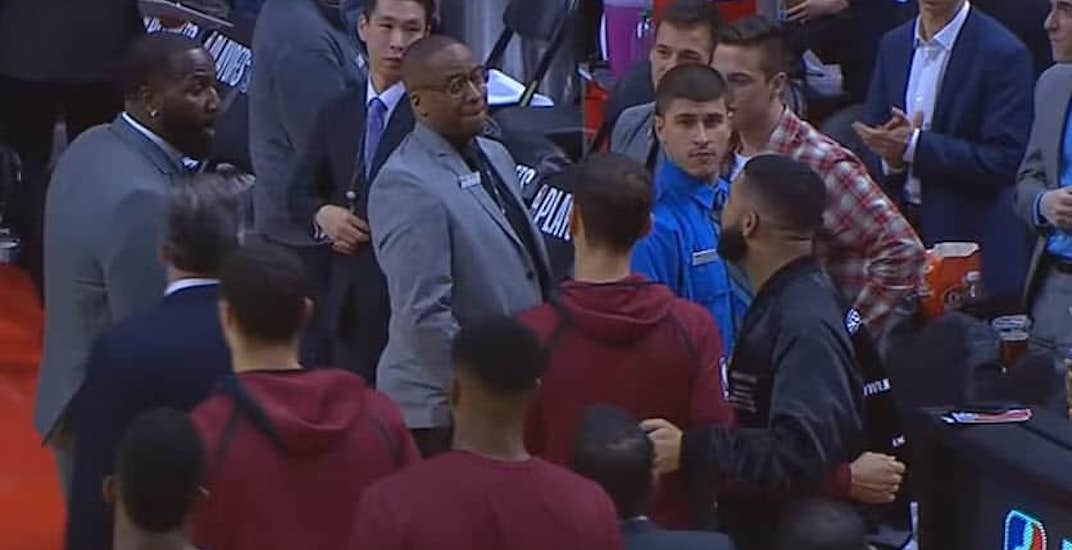 Welcome to the playoffs, everybody.

It’s the time of year that sports fans love, as emotions run high as the importance of every game increases. That’s especially true for the Toronto Raptors, who have their season – and their reputation – on the line as they began a seven-game series against LeBron James and the Cleveland Cavaliers.

It was an intense game that went to overtime that saw the Cavs sneak out of the Air Canada Centre with a 113-112 win… But not before one visiting player got an earful from Toronto’s most famous fan.

Drake, who is no stranger to trash-talking Raptors opponents from his courtside seats, was at it again. He was seen talking to LeBron at one point in the game, though that appeared to be lighthearted.

It wasn’t as cordial with Kendrick Perkins.

The 6-foot-10 centre, who wasn’t dressed for the game, was seen exchanging words with Drake at half time. The two had to be separated, with former Raptors guard Jose Calderon calming him down.

"I don't think Drake want that one." #KGArea21 reacts to @Drake talking to Kendrick Perkins during Game 1.

The war of words continued post-game, with both men needing to be separated again.

So what was said?

Drake was steamed as he left the arena. Was yelling that nobody should speak to him like that. https://t.co/uRfv5oDwUu

This went all the way into the tunnel, with Drake calling Perkins a "f—— p—-" and calling for him to come out. "I'm here in real life," he said. He was mad. https://t.co/3DJ2HBvrWN

Here’s Perkins’ side of the story:

In a text message to ESPN, Kendrick Perkins says: “What happened was I was talking to my old teammate Serge (Ibaka) walking into halftime telling him ‘We about to win this game,’ and Drake butted in talking shit to me. So I said something back to him.” https://t.co/sJ3Ntx6zVy

Although according to Drake, it all had to do with the hem on his capris.

.@Drake clarifies what he said to Kendrick Perkins after Game 1 👀

Either way, this sets the stage nicely for Game 2 – arguably the biggest game in Raptors history – on Thursday night.