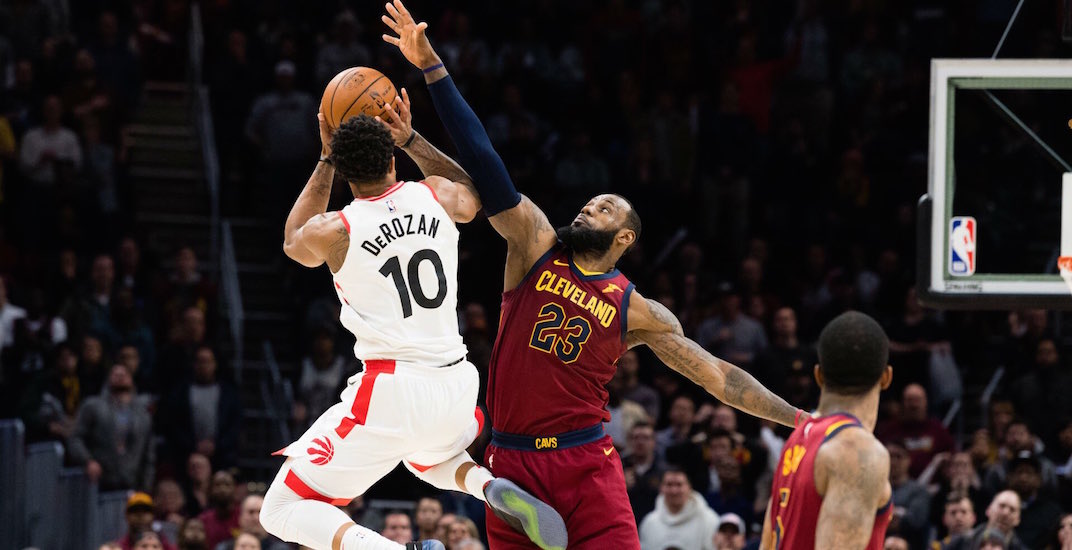 LeBron said he was tired. His teammates had to be too, having just one day off after a grueling seven-game series victory against the Pacers.

And in the first quarter, they looked it.

The Toronto Raptors came out of the gates fast, jumping out to a 33-19 lead after the first 12 minutes. Cleveland battled back in the second quarter, though Toronto maintained a three-point lead at half time.

The second quarter included this moment that drew a lot of attention, with Fred VanVleet standing up to LeBron James after he got tangled up with the King:

Van Vleet wants a piece of the king pic.twitter.com/aFqfcvcYvq

DeMar DeRozan (22 points, 7 rebounds, 5 assists on the night) and Kyle Lowry (18 points, 3 rebounds, 10 assists) led the way for Toronto in the first half of the game. Jonas Valanciunas was a beast for the Raptors in the third quarter, en route to 21-point, 21-rebound night.

The Raptors led for most of the second half, but it was close.

Toronto’s offence dried up in the fourth quarter, scoring just 18 points – their lowest-scoring quarter of the game.

Still, they had a glorious chance to win the game in the final seconds. VanVleet missed an open look, as did his Raptors teammates who snagged some offensive rebounds off the miss. They were this close:

3 blown chances to win the game
HOW DO THE RAPTORS DO IT pic.twitter.com/Fvk64vMulI

Cleveland got their first lead in overtime, and they didn’t look back. Toronto, to their credit, battled hard. They scratched and clawed to make the game close, giving themselves a chance to win on the final possession in OT.

This three-point play by Lowry with under a minute left cut the Cavs’ lead to one.

Again, VanVleet was given a chance to be the hero on the final play, but he wasn’t able to sink a three-pointer with time ticking down, and the Cavs escaped with a huge Game 1 win.

James had a triple double, scoring 26 points while adding 11 rebounds and 13 assists.

There’s no sugarcoating this one – this is a crushing loss for the Raptors. If there was a game they should have won in this series, it was Game 1 at home, against a tired Cavs team.

Raptors fans will now have to endure the haters running their mouths until Game 2 on Thursday. The only way to shut them up will be to beat LeBron and even the series before the series shifts to Cleveland.