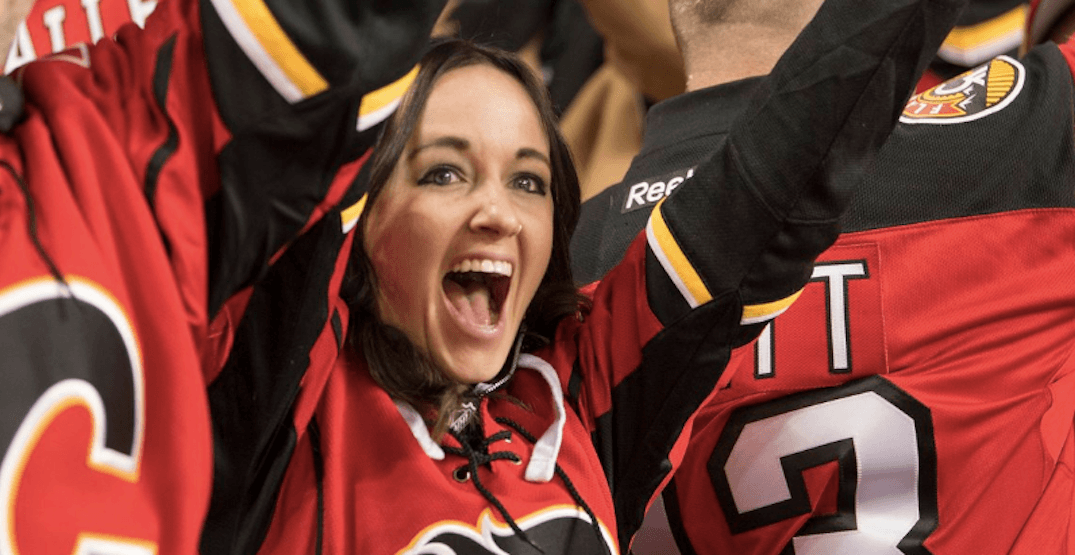 There’s nothing quite like the roar of the crowd, the sea of red, and the electrifying atmosphere of watching a Calgary Flames playoff game at the Scotiabank Saddledome…

But those tickets can get a little pricey, and not all playoff games are at home (unfortunately).

Well, fortunately for Calgarians, the city has plans to host Flames fans for viewing parties of the Flames’ post-season during both home and away games, giving attendees the chance to experience the type of electricity that is only created by cheering for your team along with a like-minded crowd — as well as booing the competition.

“This is a great time for our community to celebrate the Calgary Flames and support local businesses,” said Mayor Naheed Nenshi, in a release.

“Make sure you’re playing safe and having fun!”

For home games, the city will set up a Red Lot Community Viewing Party, where fans will be able to watch the game (for free!) on an enormous TITAN screen at Stampede Park’s Lot 3.

Other entertainment will include Harvey the Hound, face painting, food and drink specials, prizes, and interactive stations.

For away games, the party heads over to Olympic Plaza, and will begin one hour before puck drop with a huge screen, family activities, prize draws, and food trucks.

This event will also be free to attend (though you’ll need to pony up some cash at the food trucks), and Calgarians are encouraged to bring their own blankets or lawn chairs to sit on.

It should be mentioned that alcohol and smoking are not allowed, though we’re sure you’ll be drunk enough on all the excitement.

The Flames’ playoff run will be kicked off with the Red House Playoff Launch Party on April 11, with the Big Four Roadhouse being filled with its very own sea of red.

While it may cost $10 to get in the door, once inside fans will be able to purchase food and drinks, watch the game, have a chance at winning prizes, and enjoy music by Calgary’s own Smalltown DJ’s and The Dudes.

The entire viewing party will be hosted by Calgary icon and FUBAR star Terry Cahill.

Tickets can be purchased online (by those 18-years-old and above), with proceeds going to the Flames Foundation.