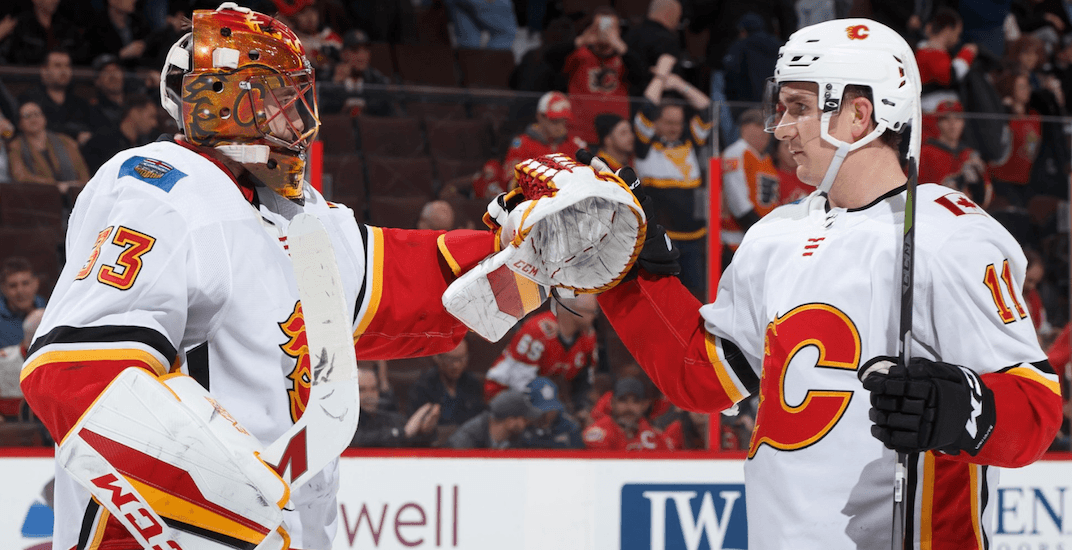 Heading into their first round series against the Colorado Avalanche, there’s no bigger storyline ahead of Game 1 for the Calgary Flames than goaltending.

On a stacked team that captured the Western Conference title for the first time in 30 years, the space between the pipes has been a giant question mark for most of the season.

Rittch became ‘Big Save Dave’ over the first half of the season and was the unquestioned starter as the calendar changed to 2019, but a ho-hum record down the stretch has tempered expectations.

Rittich seems like the safer bet for Calgary, which could be needed for the Flames to make good on their home ice advantage this week.

As for Smith, it’s no secret that his second year wearing Flames colours has been anything but stable.

After a horrendous start to the season that saw his starter role unseeded, Smith has been one of the more consistent Flames heading into the playoffs.

So do you ride the hot hand or go with the player that’s carried most of the water to get to the postseason?

Ultimately, it will be a toss of the coin, but the latter likely is the safer option for Calgary.

Early indications point to the more veteran Smith as getting the call for Game 1 after getting the starter’s net in Flames practice on Monday.

Smith is in the starting net again. Lines the same as yesterday. Ditto with the pairings.

That decision won’t be released until Thursday though, as Peters told Calgary media on Monday that they’re confident in both goalies.

“We’re going to go with the guy that gives us the best chance to win,” said Peters.

The 37-year-old Smith has been able to rebound after being one of the least reliable goalies in the league over the first half of the season.

Seeing his starts pick up again in mid-February, Smith has been rock solid in the Flames’ crease recently with a 9-5-1 record and a 0.912 save percentage over his last 15 starts.

That’s given Peters confidence to potentially hand Smith the reigns to begin the series, but Flames fans are still anxious about what they’ve seen from the vet.

Letting in weak shots from the blue line, poor handling of the puck behind the net, and general lapses in positional play have dogged Smith all season.

More worryingly, Smith has seen his confidence shaken on many of these plays and on multiple occasions this year has let a weak goal derail his night.

If that happens early on in the Avalanche series, it could give the Flames flashbacks of 2017 when Brian Elliott struggled to find his confidence in a four-game sweep at the hands of the Anaheim Ducks.

Big Save Dave not perfect either

Now that’s not to say Rittich has been squeaky clean either, as he has shown moments of his sophomore inexperience in second-half losses to Toronto and Tampa Bay.

But for most of the season, Rittich has shown that he can bounce back from allowing a questionable goal and not allow the pressure of the situation to get to him.

COL-CGY
Grubauer came off the mat and has been great last ~500 shots. Rittich has been a little more consistent than Smith, but both fairly average recently pic.twitter.com/MvbIxOcObn

It’s a big reason why the Czech product only lost nine games in regulation all year and has allowed more than three goals in a game just three times in his last 17 starts.

Colorado’s offensive weapons have also been silenced more with Rittich in the Flames crease, with the second-year netminder posting a 2-0 record and a 0.918 save percentage in his two starts against the Avalanche.

Smith was also undefeated in his lone start this year versus Colorado, but he did allow five goals on 26 shots in a wild 6-5 comeback victory for Calgary.

The one area where Smith holds a distinct advantage over Rittich is in playoff experience, but it’s been a long drought in between playoff games.

Smith was dominant the last time he played in the Stanley Cup playoffs, taking the Phoenix Coyotes (as they were known then) to the Western Conference Final.

However, that was all the way back in 2012 when Rittich was just 19 years old, marking seven years between playoff appearances for the elder statesman.

It’s likely that playoff experience will be combined with his recent hot play to justify giving Smith the reigns to start Game 1.

And in reality, it’s a move that could work out for the Flames if Smith has truly moved past his earlier struggles.

Whomever gets the call to begin the series, Peters will likely have them on a short leash ready to swap the other in if the series starts to go awry.

Despite the up and down nature of both netminders this year though, Peters told reporters that he’s confident in throwing either his young import or his experienced veteran out against Colorado.

“We were a top-10 team, ninth actually and I don’t know if it’s 2.70 or 2.73, but that was our goals against in the regular season,” said Peters. “Top 10 in the National Hockey League, pretty good, pretty good team defensively.”

“So, in order to be a pretty good team defensively you got to have pretty good goaltending, so we must have that.”