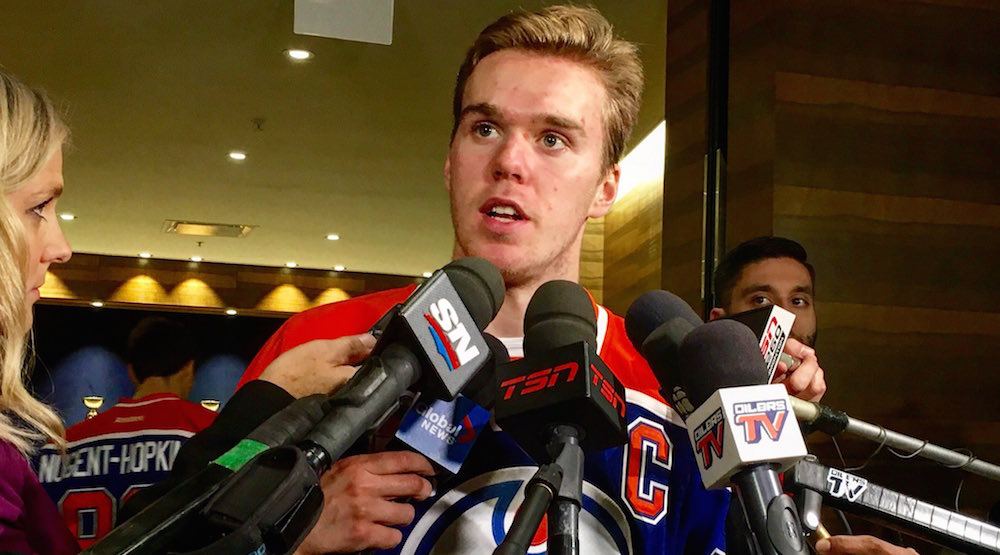 I know, I’m getting queazy just writing that too.

But let’s say you’re a hockey fan in Edmonton. The team you cheer for misses the playoffs 10 years in a row. You’re the laughing stock of the NHL.

Then a magic fairy comes along and delivers you the first pick in the draft.

You get the gift of Connor McDavid, a generational talent. You get the type of player every team in the league would kill to have.

Then McDavid lives up to the hype immediately, scoring 228 points in 193 games, winning a Hart Trophy, an Art Ross Trophy, and a Ted Lindsay Award in just his second season.

Oh, and he drags your sorry franchise into the playoffs in his first full season while carrying the weight of the world on his shoulders as your team’s captain.

If he’s not the best player in the league, he’s certainly the most exciting.

On top of everything, the 21-year-old carries himself with the type of class and dignity you could only dream of.

Now, let’s say you run into this living legend in your town. Of course, you heckle him ruthlessly.

Amazing but true, some idiot in Edmonton ridiculed McDavid, with video captured and posted to social media.

Here is Connor McDavid and his family being ruthlessly chirped by a few teens outside a restaurant pic.twitter.com/AqKgOToNSq

McDavid, who was with his parents at the time, took the high road.

“Honestly it’s so not a big deal, I’m not even going to say anything about it,” said the classy hockey superstar after practice on Monday.

“He would be the last one I would heckle if I was a fan. He gives the community everything he has. And I’m not just talking on-ice,” said Oilers coach Todd McLellan, adding that McDavid seemingly visits kids in the hospital or around the community every couple of days.

The Oilers have had a disappointing season and are well out of the playoff race. But McDavid is most certainly not the problem given he’s in the running for the scoring title once again, with 80 points in 66 games.

So to heckle him would make you… Well, an idiot.