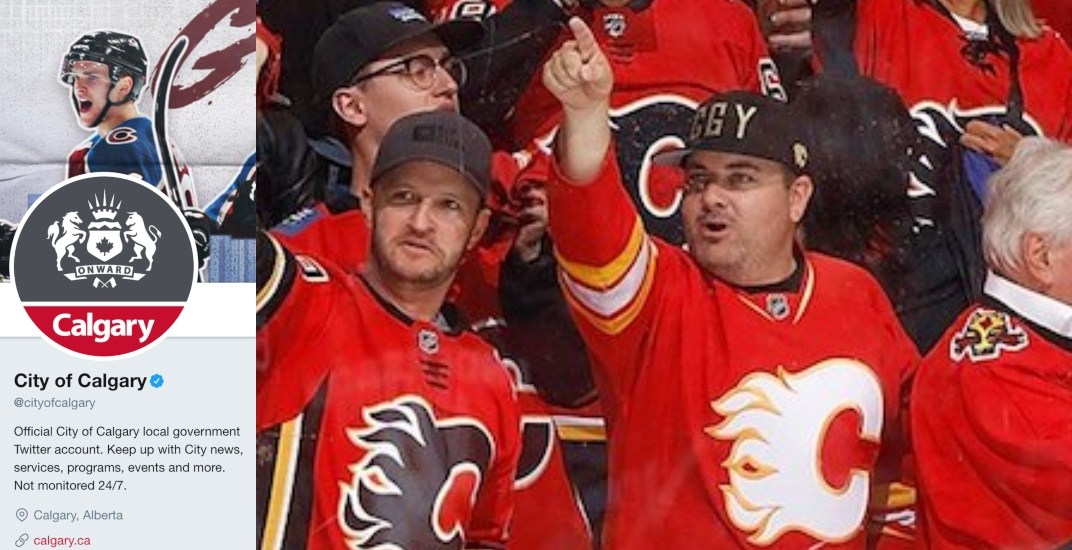 Be careful what you wish for.

The City of Calgary learned that the hard way after the Flames were left stunned by the underdog Colorado Avalanche in the first round of the Stanley Cup playoffs.

The official City of Calgary Twitter account just may have jinxed the Flames in Round 1 with a wager against the City of Denver.

Feeling understandably confident given the Flames topped the Western Conference during the regular season, the city account proposed a friendly bet.

Hey @CityofDenver, how about a friendly wager?

If the @NHLFlames win this series: you change your cover photo to an image of our choice and tweet "Clearly the best team won. Go Flames Go!"#Flames #BringTheRed

Despite the Avalanche being long shots to win the series, Denver took Calgary up on the offer.

Yeah, we’re game 😊. If @Avalanche win the series, you hoist a delicious Colorado craft beer, change your cover photo to an image of our choice and tweet “Denver is a REAL hockey town.” See you on the ice tonight! #GoAvsGo  #StanleyCup

By now you know the result of the series – the Flames lost in five games – leaving Denver with the last laugh.

.@cityofcalgary Good game. Very tough series. 🍺 Have one on us 🥳🥳 https://t.co/wJ7pfYLhaS

Well, the City of Calgary has honoured its word and “joined” the Avalanche bandwagon for the second round.

Denver is a REAL hockey town. Congrats on the series @CityofDenver and good luck in round 2 against the Sharks 🦈 @Avalanche. 😉#GoAvsGo #StanleyCup pic.twitter.com/IKFmnHuEgT

People seemed generally impressed with Calgary for honouring the bet.

💜 true to their word. Cheers, Calgary!

We may not be happy up here, but we’re true to our word. Good luck in the rest of the playoffs! #GoAvsGo #StanleyCup

Thank you for paying up, Calgary, that’s class

It’s true.. Thanks Calgary for holding up your end of the bet. Classy! pic.twitter.com/EwS05AmKmO

If you head over to the official City of Calgary Twitter account right now, you’ll also see the Avs have also taken over their header photo.

It’s been fun @cityofcalgary! Thanks for being such a good sport. There are no easy days on the ice. L👀king at you @CityofSanJose @SanJoseSharks. #GoAvsGo #StanleyCup pic.twitter.com/1YpFzv6MlT

It’s going to be a long offseason.