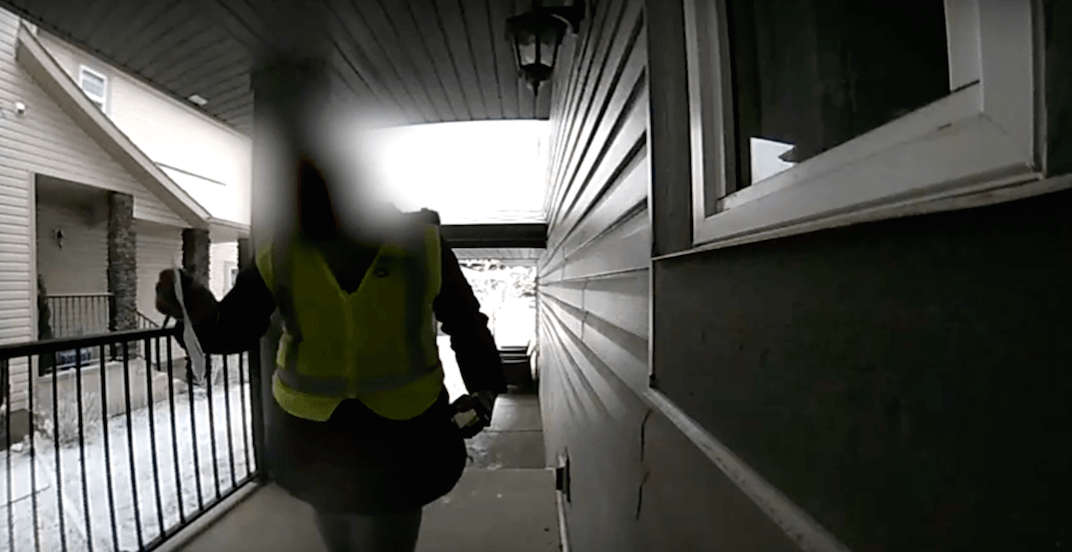 Another video showing a Canada Post employee not even attempting to deliver a package has surfaced this week.

The video, submitted by a Daily Hive reader, shows a Canada Post worker walk up to a front door with a delivery slip (already filled out) in their hand but no package.

The worker does not knock or attempt to see if anyone is home. They simply leave the slip on the door before quickly returning to their vehicle.

The incident took place on Thursday, January 16, in Airdrie, Alberta.

The Canada Post customer who filmed the latest incident claims similar situations have happened to them many times before.

“The worst experience was when my signature was forged by an employee. The package was a legal document that had to be signed for, the carrier forged my signature on the slip and put the slip with [the] package in my community mailbox.”

The customer added that they called the postal service, but the situation was not rectified. Following this incident, the customer installed cameras at their home “because of Canada Post.”

“I have never been able to confront them, they are quick. We also have had it happen about 10+ times where they say attempted delivery but we received no slip and cameras show no attempt at all.”

A spokesperson for Canada Post told Daily Hive the parcel should have been attempted on the first visit to the door.

“This is part of their training which includes regular reminders. We will look into this incident and follow up internally with the employee, and ensure that the proper delivery protocol is enforced with our teams throughout the region,” said the spokesperson.

“In any instance where we don’t meet the expectations of the customer, we ask them to contact our customer service line – either online or by phone – so that we can investigate and determine what may have happened.”

Have a video of a delivery person failing to properly attempt a home delivery to you? Send to [email protected]