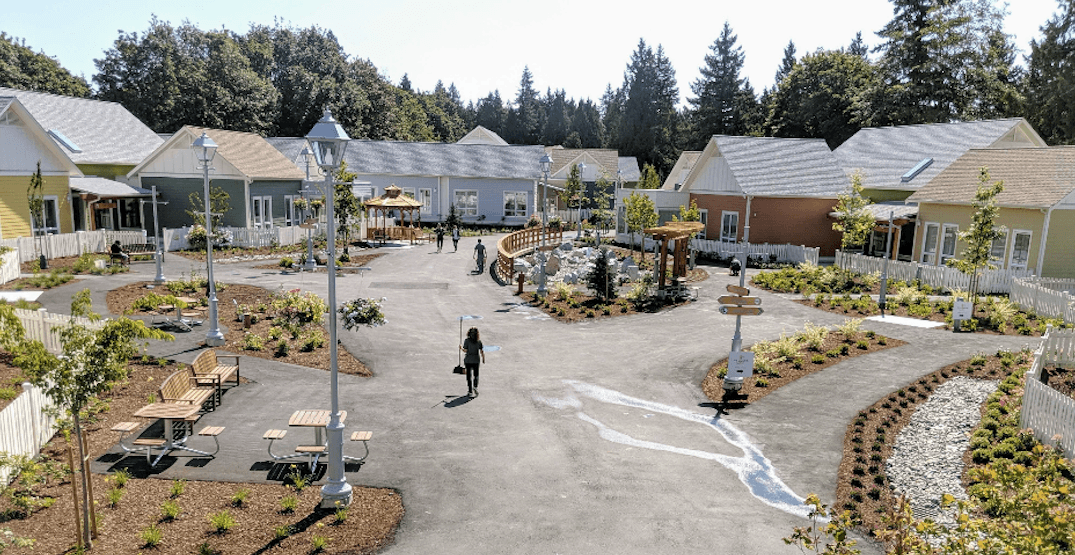 While the concept of such a place may be new and novel to most people, Elroy Jespersen has a straightforward message for residents and employees of Canada’s first Dementia Village – simply known as The Village – located in Langley, BC.

“Embrace normal,” Jespersen told Daily Hive, during a tour of the site on Tuesday. 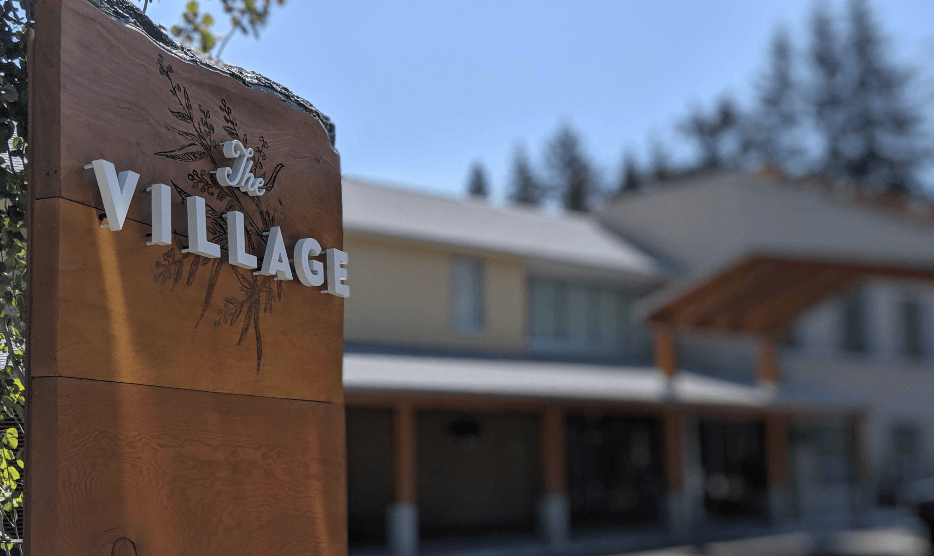 Jespersen is the project lead on The Village: a “concept village community,” created from a vision of caring for dementia patients in a different way, beyond “the more typically institutionalized” approach.

“There are things most of us wouldn’t consider normal, but tend to be around institutions,” said Jespersen.

With over three decades of of experience in the seniors housing industry himself, Jespersen said it’s his belief that a lot of the behaviour that people associate with a dementia patient has nothing to do with them personally, “but rather the environment they’re forced to live in.”

As such, The Village is taking a different approach.

An approach, for example, that means “not waking someone up at a predetermined time, dressing them, and wheeling them down for breakfast.”

Rather, it’s geared towards better reflecting how people would live a “normal” life, he said. “‘Normal’ is them getting up when they want, and having breakfast when they want, for example.”

Situated on the site of a former elementary school (closed in 2007), the five-acre, privately-funded community takes its inspiration from the world’s first Dementia Village, de Hogeweyk, located in Holland, and from the Green House Project in the US.

The property features six, fully-staffed, single-story cottages which can accommodate 12 people each, for a total of 72 residents.

The cottages themselves have been designed to be offer the feel and appearance of a “normal” home.

For future residents of The Village, Jespersen predicts: “It will be gratifying to see a year or two or three from now that many of those behaviours people associate with dementia won’t be present to any large degree in The Village, and it will be because of this normalized environment.” 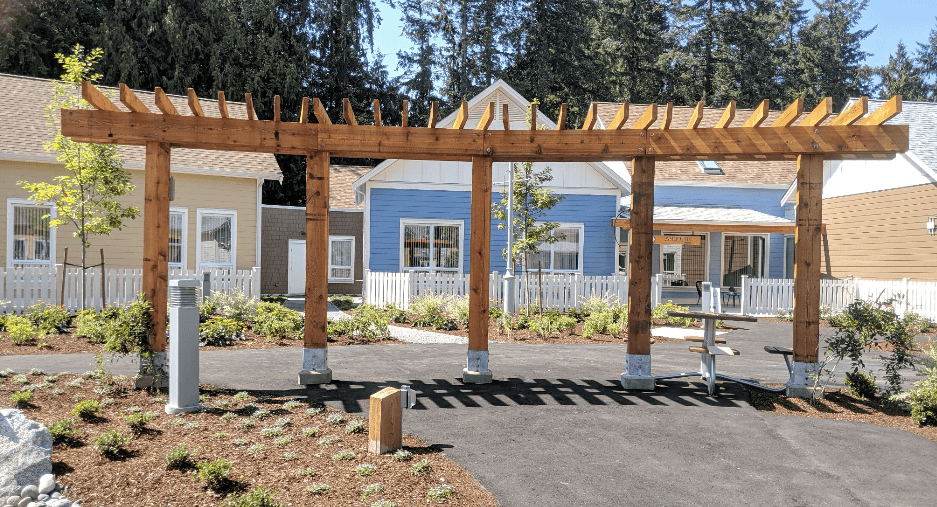 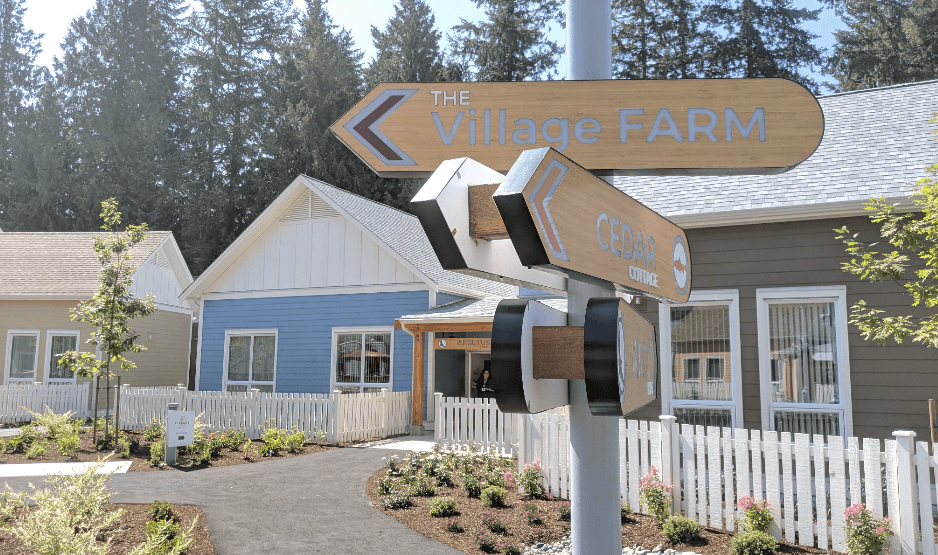 Although Jespersen said he and his team had scouted other potential locations in BC’s Lower Mainland, Langley was chosen as the site for the project for a simple reason: “The land was here.”

He explained that for the project to be fully realized, “we needed something around two to three acres, or more.”

After searching for an appropriate site for “about two years,” Jespersen said he saw an ad in the paper that the Langley School Board was selling some of its closed schools.

The property and the cottages

The cottages themselves are centred on a Village Plaza and Community Centre that is designed to be the activity hub of the community. 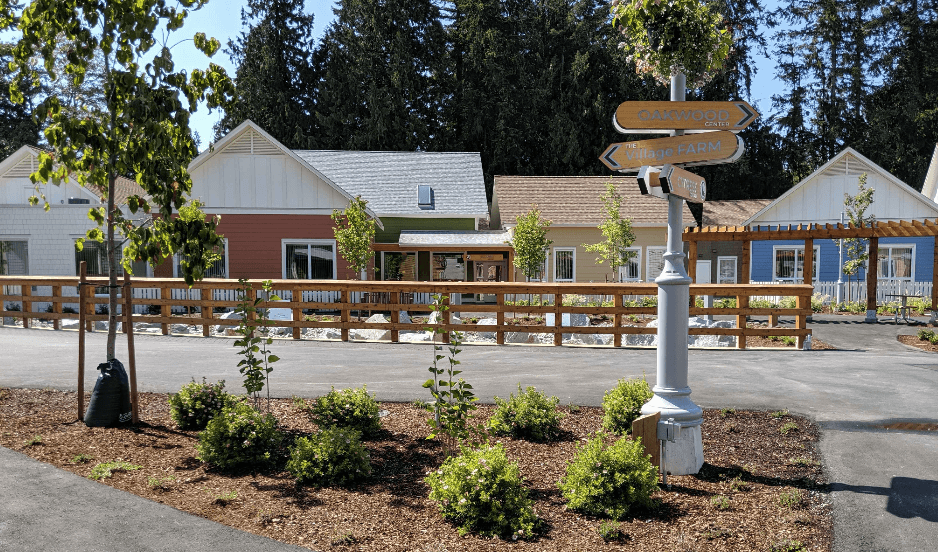 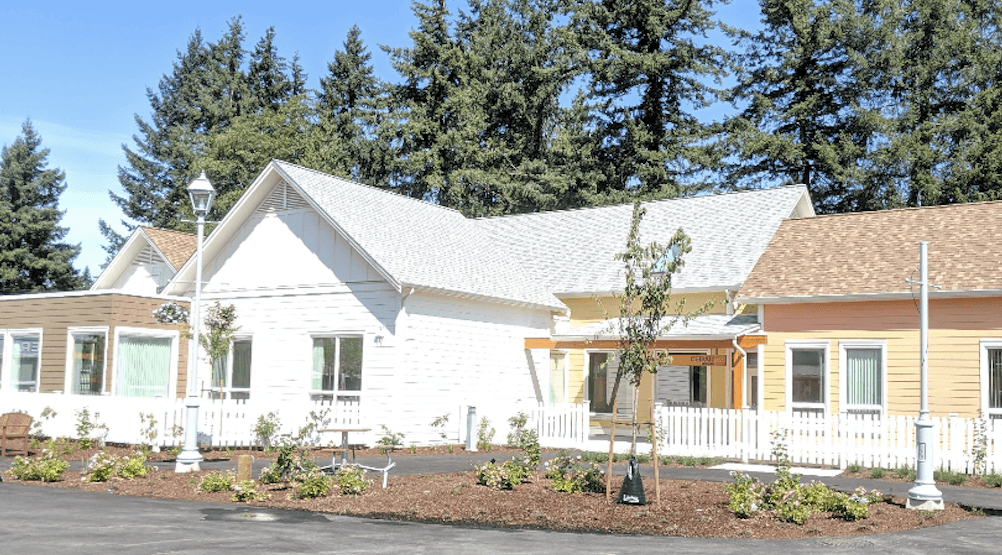 All the elements of a typical “village” are incorporated into the property design as well.

These elements include places like a “general store,” where residents can come for items such as small household supplies, snacks, and other goods. The items are all provided free of charge, as the goal of the store is to give the residents the familiar experience of “shopping” for items themselves. 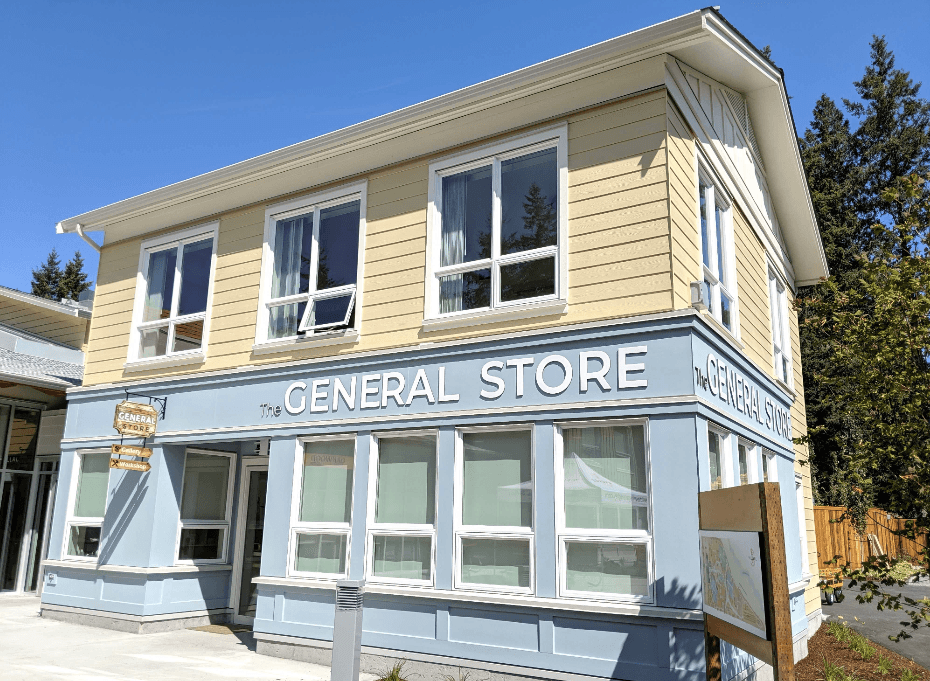 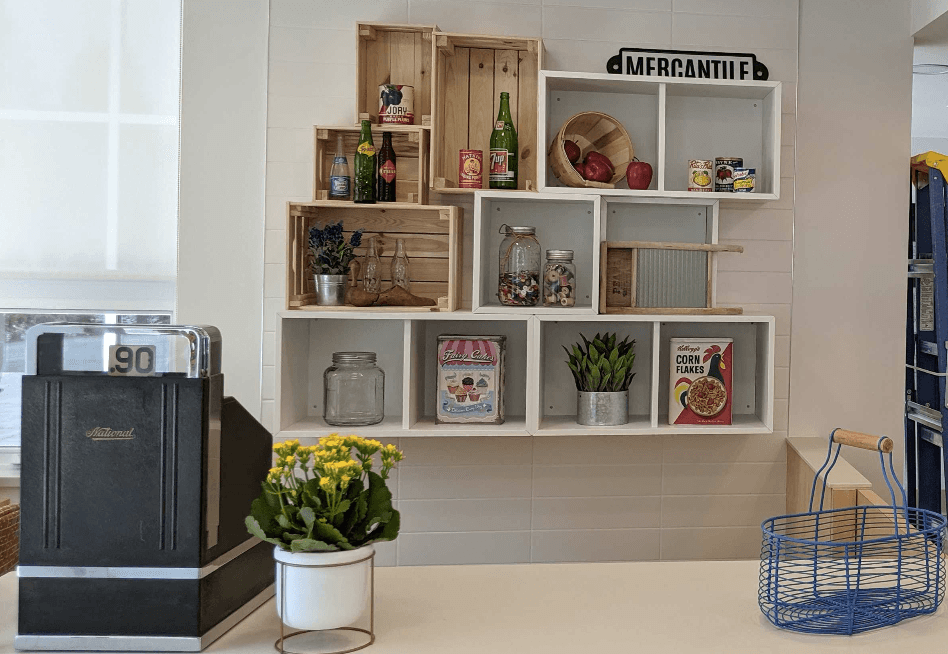 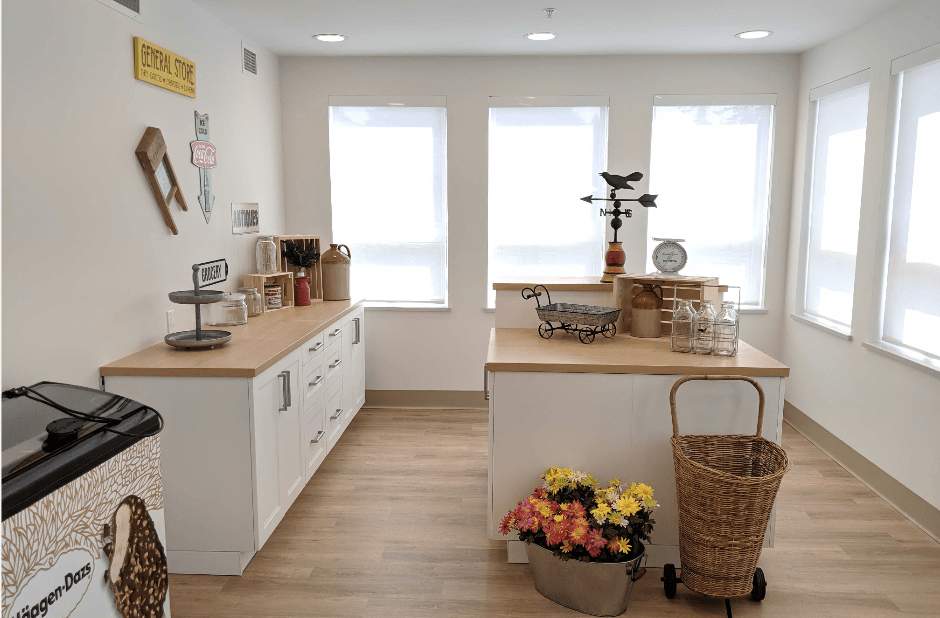 A room inside the General Store. (Eric Zimmer / Daily Hive) 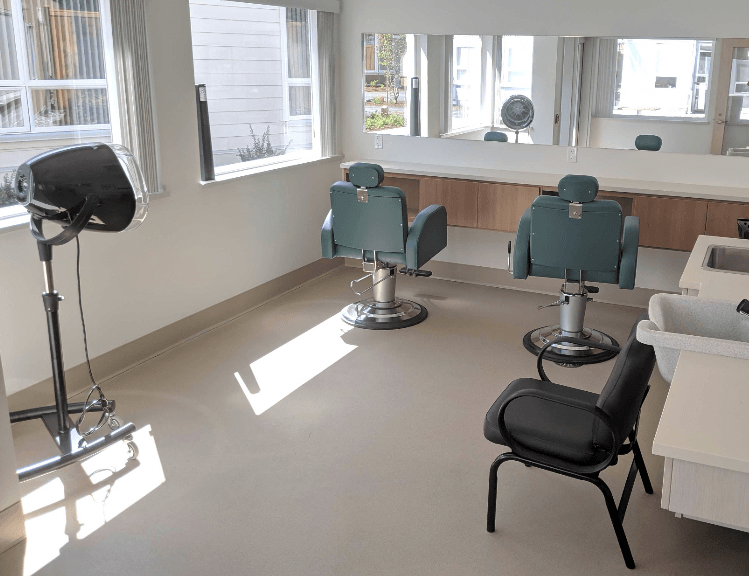 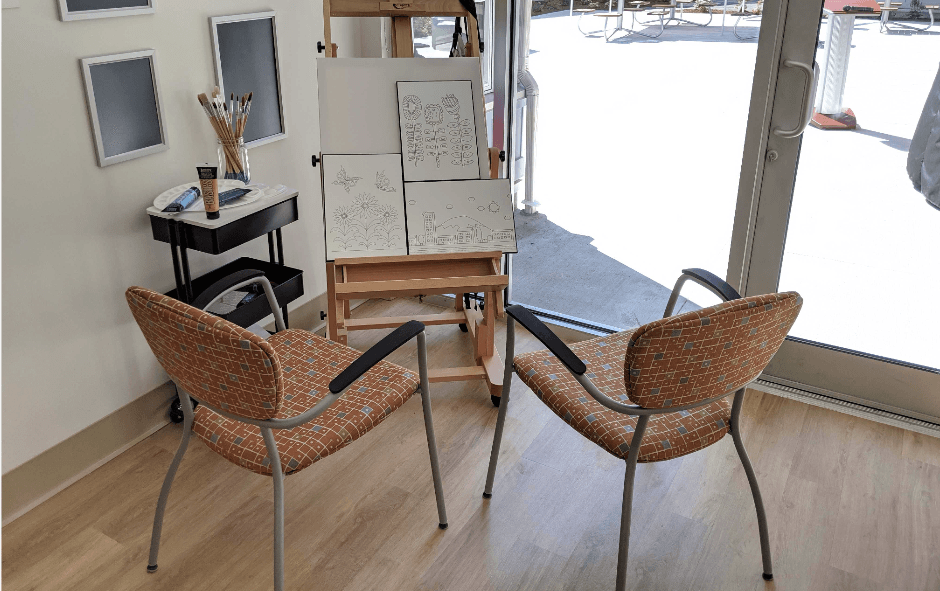 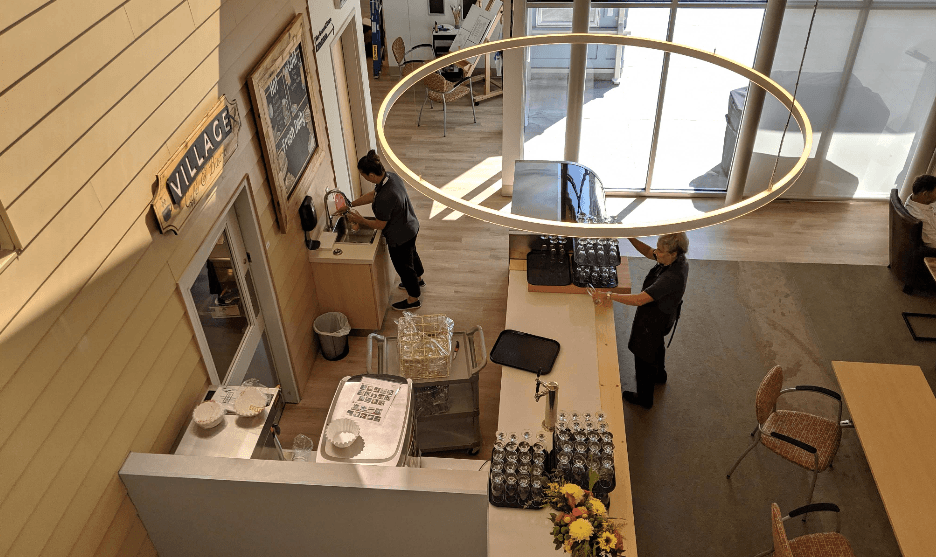 Outdoor activities are encouraged too, and residents can choose from different ideas including visiting a barn (complete with animals), a veggie patch, activity lawns, water gardens, “sensory gardens,” and numerous pathways. 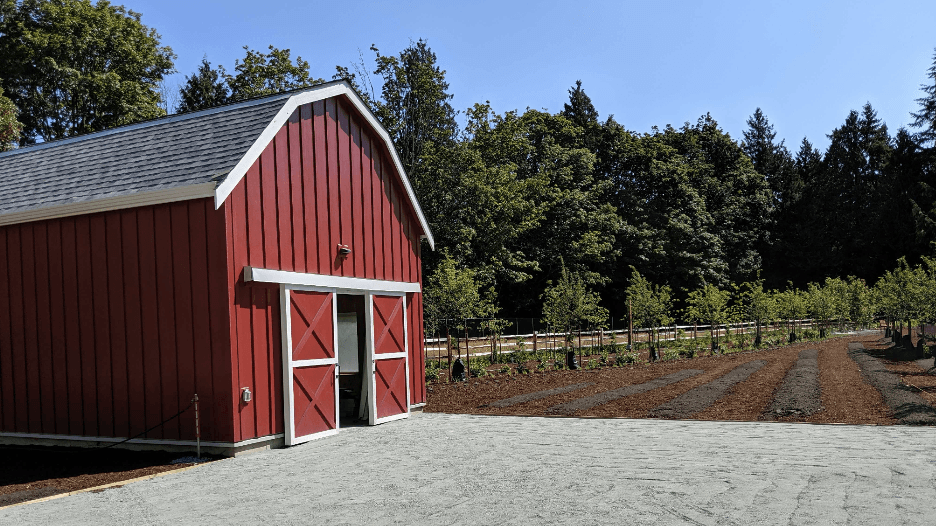 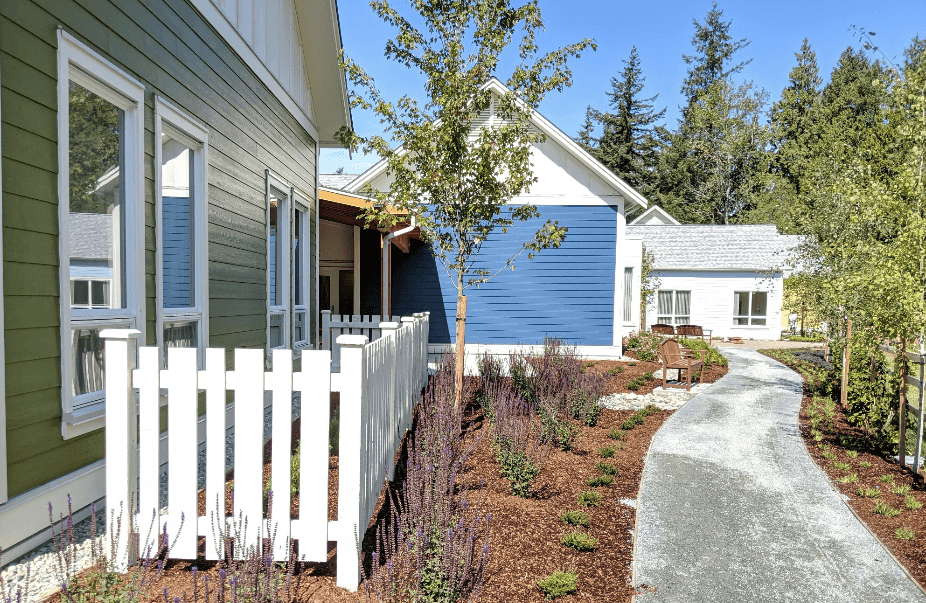 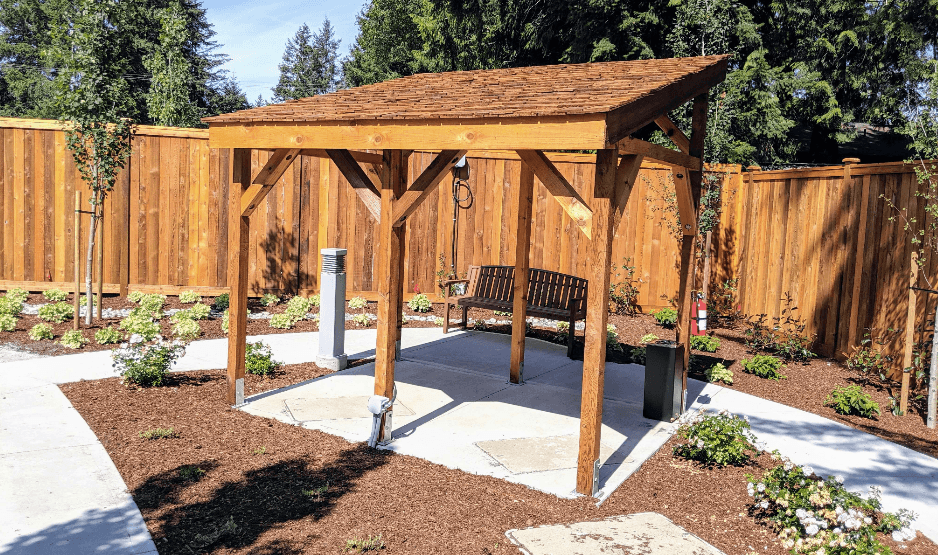 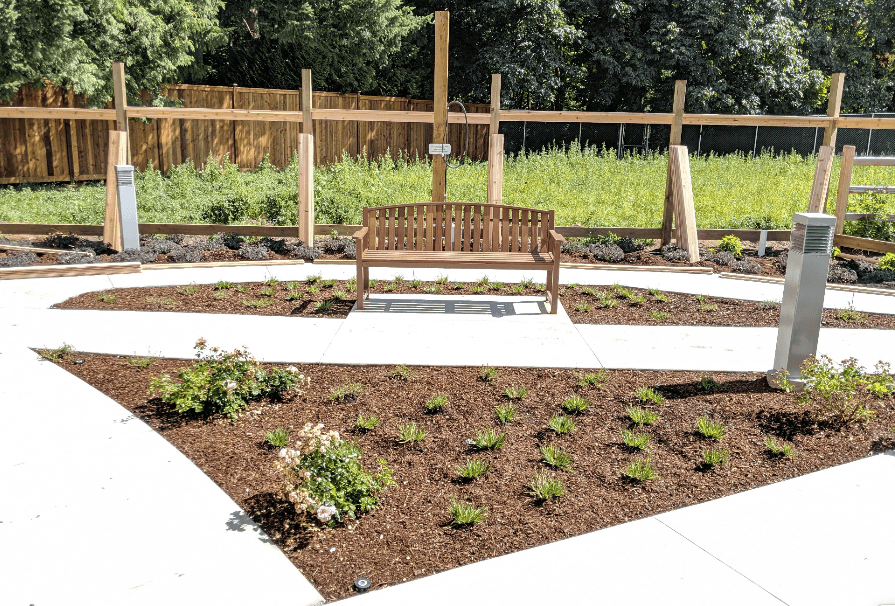 Adrienne Alford-Burt is the executive director of The Village.

She told Daily Hive that government legislation ensures that the standard of care, rules, and regulations is uniform across the assisted and senior living industry in BC – no matter the facility.

However, what sets The Village apart is the “personalized approach” it takes to enacting that legislation, she noted.

“We’re incorporating items and objects into this setting that we feel better represent more day-to-day living, and that are not ‘institution’ looking, feeling, or sounding,” she explained. “The idea is to give residents of The Village a more ‘home-based feel.'”

“Because we are privately funded, people and families can self-refer,” she said. “They don’t need to go to a local health authority and wait for an assessment to be done. They can call us directly, and then we work with that person one-on-one – usually very quickly – to complete those assessments.”

Overall, she said, “it’s a very straightforward process, and the feedback that I’ve received from families is that it is far less stressful than they were expecting, because they’re not waiting weeks or months for someone to come to their home.”

It’s an approach that appears to have worked. With The Village down to its final weeks before opening, Alford-Burt said 65 people have already registered for one of the 72 available spots.

This includes applicants from the Lower Mainland, Vancouver Island, the Gulf Islands, the BC Interior – even one from Toronto.

So what excites Alford-Burt the most about the project now, as well as going forward?

As the first person hired after the project officially began, she said “seeing it come to life in a real home setting has been really exciting.”

Another thing “is connecting with the family members and getting to know the pre-registered residents; we meet the most interesting people with fabulous life histories that I wouldn’t have met otherwise.” 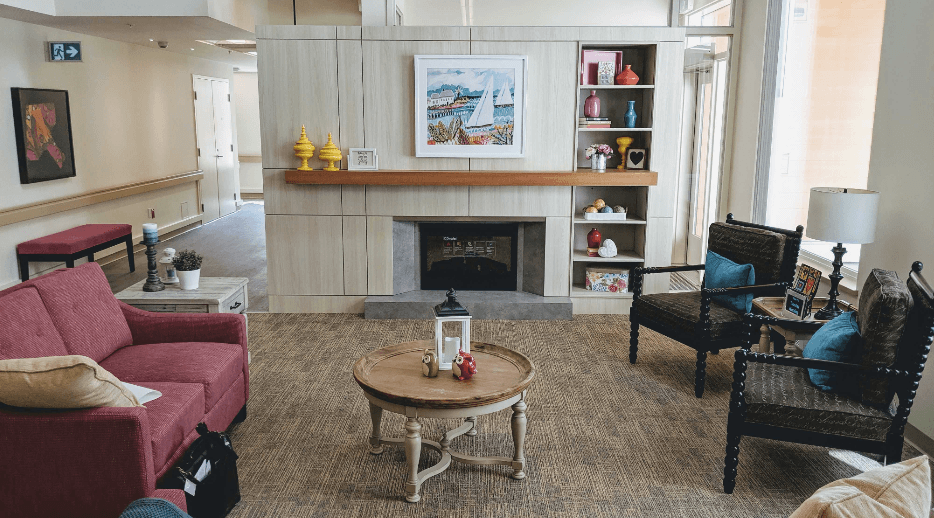 A common lounge area in one of the cottages. (Eric Zimmer / Daily Hive) 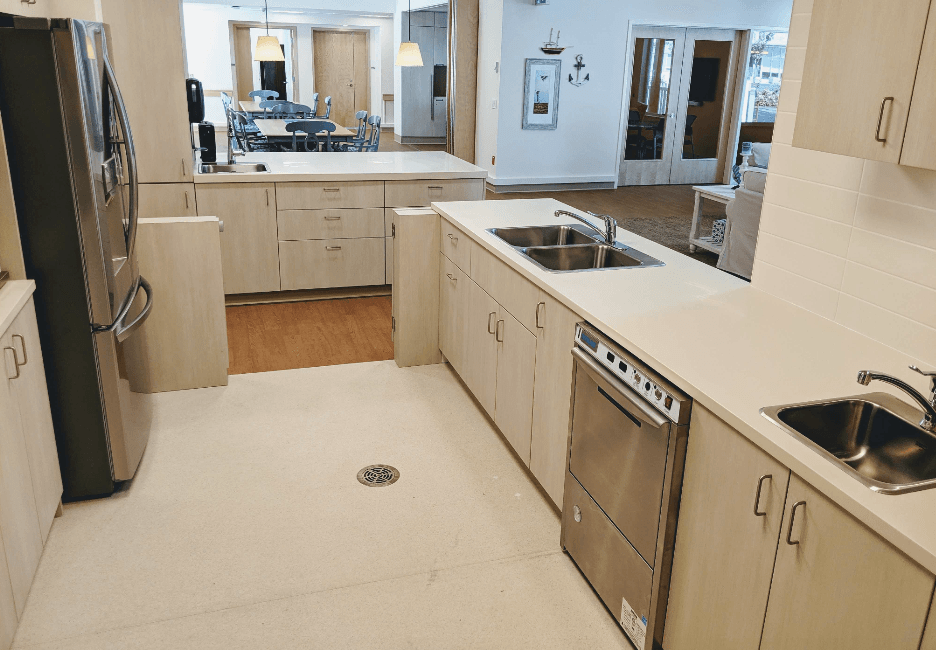 Kitchen and cooking area in one of the cottages. (Eric Zimmer / Daily Hive) 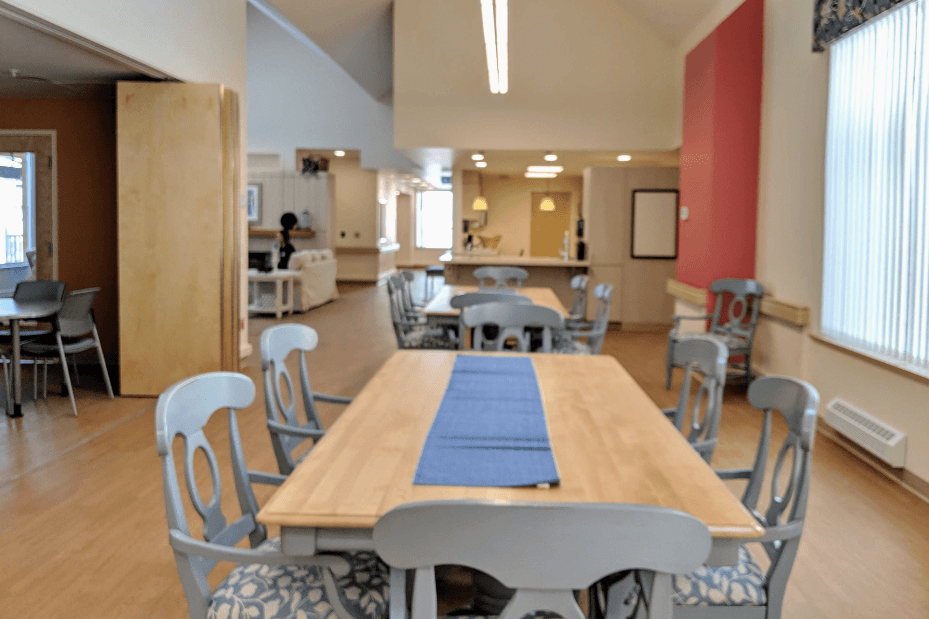 Communal dining area in one of the cottages. (Eric Zimmer / Daily Hive) 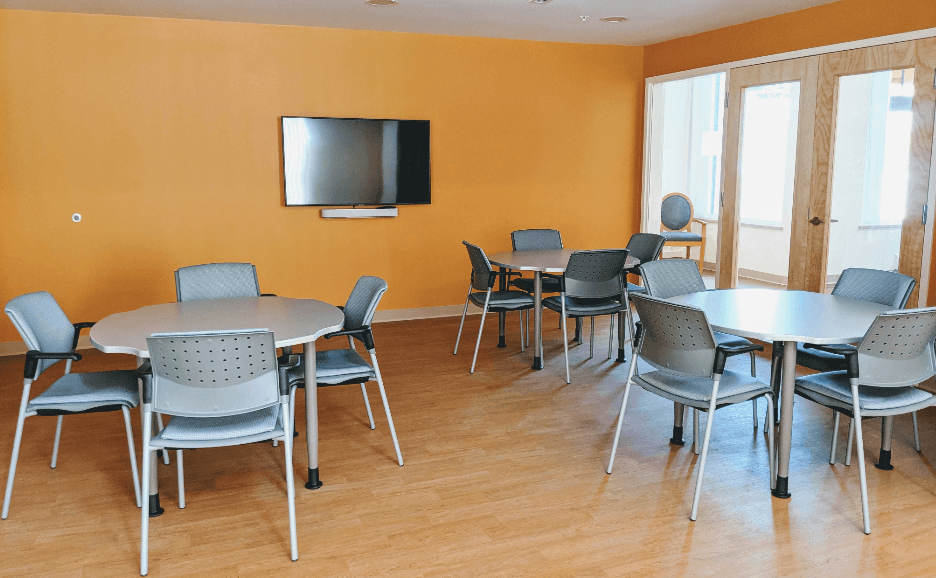 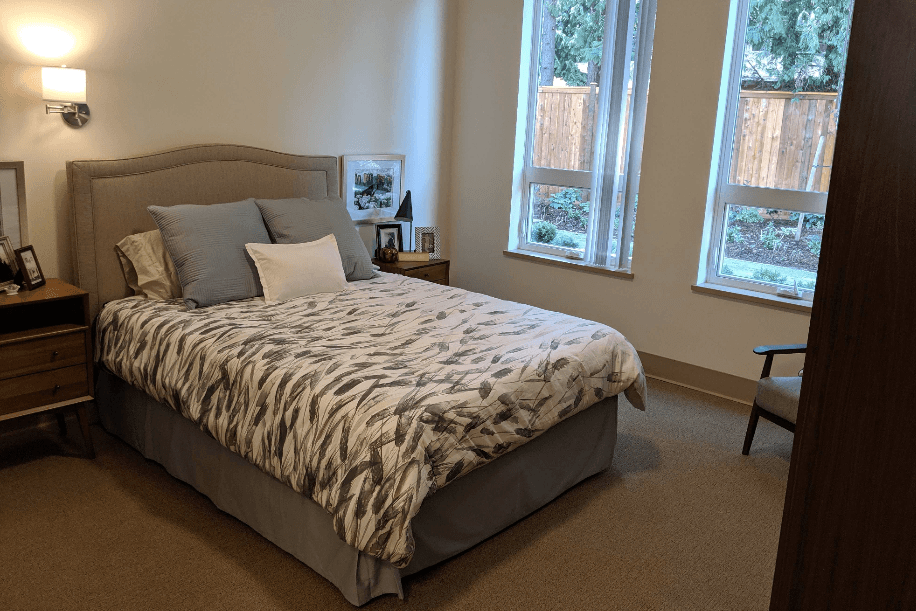 The Village is Jespersen’s last project before he officially retires on July 31. However, he has no plans to “fade away into the sunset.”

Rather, “we formed an organization called Friends of The Village, for people like myself –and others – who have something to contribute and would like to stay involved when, where, and how we can,” he said.

With its new approach to care, as well as day-to-day living for those with dementia, Jespersen recognized there are still some learning curves ahead for the team of staff.

However, “I just know if can come back here in a year and see smiles on people’s faces, people walking around having moments of joy, and feeling love, then all is good,” he said.

A public open house is scheduled for this Saturday, and doors open for full-time operation on August 1.