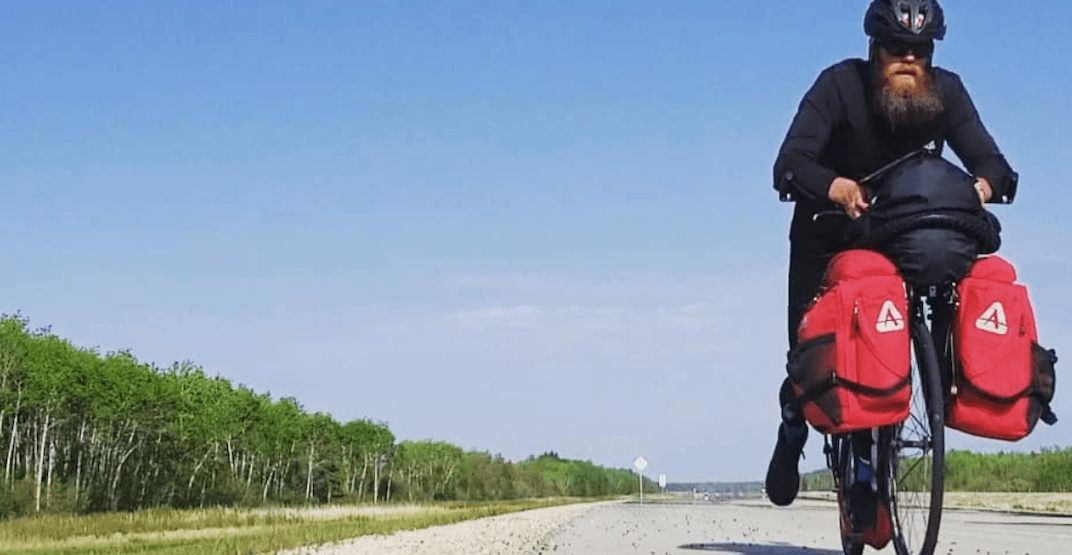 Local Calgarian and animal rights activist Rich Adams will be arriving at English Bay, Vancouver, on July 27 after travelling 6,000 km across Canada on a kick scooter.

Adams, known as Rich The Vegan, began his journey across continental Canada on April 1 of this year, at Point Pleasant Park in Halifax, Nova Scotia, to raise awareness about the Dog Meat Trade in South Korea.

Unlike many cross-Canada attempts, Rich’s “scoot” is from east to west, travelling uphill to the continental divide and against the westerly prevailing winds.

This is the 38-year-old Calgarian’s second journey on a kick scooter.

In May 2018, Rich scooted 633 km across South Korea to raise awareness about the Dog Meat Trade in that country.

During this trip, Rich was successful in rescuing several dogs from chains and cages along the way.

One of the dogs he rescued was called Kathy.

Goodbye Kathy. No more cages, no more abuse, no more suffering, no more pain. In your last hours you got to watch the sunset over the Rocky Mountains. We love you…. You are truly free now ❤ Thank you to everyone who helped rescue and care for this little girl. #freeatlast #nomorepain #nomorecages #finallyfree #weloveyou #wewillmissyou

She was clinging to life in a cage with no shade or shelter from the elements. It was then that Adams said he made a promise to save her.

While Kathy was rescued and was brought to Canada, where she lived happily for the first few months, she eventually fell ill and passed away in Rich’s arms.

Adams’ journey across Canada is in Kathy’s honour, and is titled “Kathy’s Tail: Canada 2019.”

“I want her memory to live on, to show that her life had value and meaning, and I’m hopeful that people will reflect upon their actions and the suffering that many animals experience,” said Adams, in a press release.

Anyone in Vancouver at the time is invited to catch Adams as he arrives at English Bay (across from Denman and Davies Street) and dips the front wheel of his kick scooter in the Pacific Ocean signalling the end of his 6,000 km journey.