For the second year in a row, Canada has been named the #2 best country in the world.

The study, conducted by U.S. News in partnership with Y&R’s BAV and Wharton, gives Canada the number two ranking on a list of 80 countries, only trailing his year’s #1 country, Switzerland. 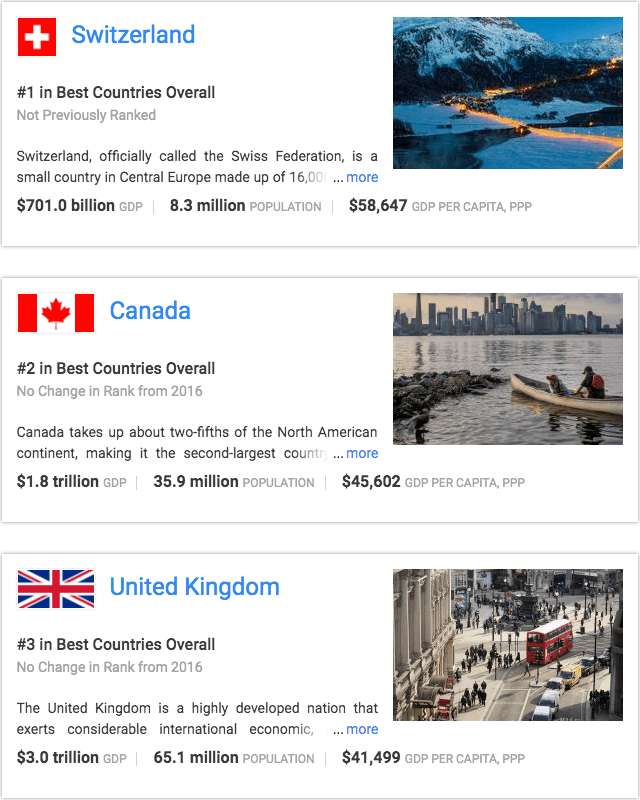 Interestingly, Switzerland was not previously ranked when the inaugural list of the world’s best countries was released last year at the World Economic Forum in Davos, Switzerland. Meanwhile, last year’s #1 country, Germany, fell back to the 4th overall spot in 2017.

Canada also came in #1 for Quality of Life for the second straight year as well as #4 for Citizenship (it was #2 in citizenship in 2016).

The methodology behind the rankings can be broken down as follows:

A set of 65 country attributes – terms that can be used to describe a country and that are also relevant to the success of a modern nation – were identified. Attributes by nation were presented in a survey of more than 21,000 people from across the globe. Participants assessed how closely they associated an attribute with a nation.

The attributes were then placed into nine subcategories which combined to create the best country rankings. The subcategories and their overall contribution are:

In the three most heavily weighted categories, Citizenship, Entrepreneurship, and Quality of Life, Canada ranked #4, #7, and #1 respectively.