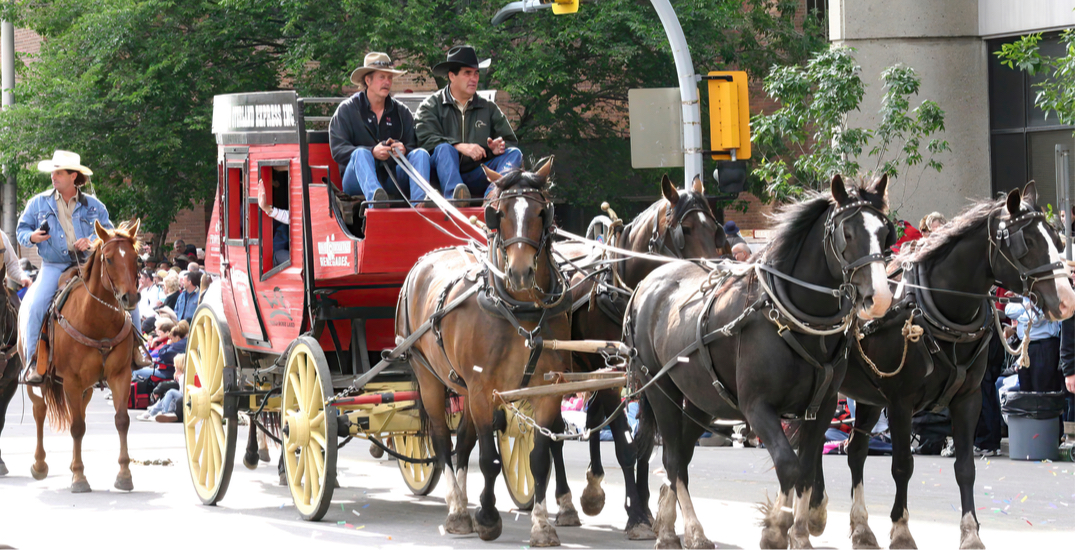 The Calgary Stampede will be holding its iconic parade again this year after the event was put on pause in 2020, but Calgarians can expect a scaled-down format.

Along with several other safety enhancements that the 10-day event will feature, the 2021 Stampede Parade will bring both a new route and a new viewing experience.

In previous years, the parade has travelled through downtown Calgary amongst crowds in the thousands.

In a Wednesday morning news release, the Calgary Stampede said that the parade would take a new route this year, travelling through Stampede Park prior to the gates opening to the public on the morning of Friday, July 9.

In addition to the new route, the parade will be shared with the community as a virtual experience only, with all of the excitement to be broadcast live starting at 8 am on July 9.

Viewers can catch the event on Global Calgary and Amazon Prime.

Event organizers said that parade viewers can expect to see many of the things we know and love, including floats, marching bands, and many mounted riders.

You can’t have a parade without a leader, and the Calgary Stampede also announced the 2021 marshal on Wednesday morning.

Parade viewers may recognize Marshal Katari Right Hand from the 2021 Stampede poster. The talented Fancy Dancer from the Siksika First Nation is featured on the poster in an image that showcases determination and perseverance through tough times.

“Right Hand has been dancing and showcasing her culture at the Stampede since she was a child. Now, at 17 years old, she will lead the iconic parade, kicking off the Stampede’s annual community celebration,” reads the news release.

Lexi Hilderman, the 22-year old artist who created the 2021 Stampede poster, will be joining in the festivities travelling the route in the Calgary Stampede Foundation carriage.

“I am very proud and excited to be the 2021 Stampede Parade Marshal, so I can represent Niitsitapiiks. I’d like to thank Lexi Hilderman for selecting my picture as her entry for the Calgary Stampede 2021 poster contest,” said Right Hand.

Also featured in the event will be the 2020 Parade Marshal, Filipe Masetti Leite.

In 2012, Masetti Leite saddled up and set off from the Calgary Stampede on a journey across the Americas on horseback. His arrival in Calgary last year after this incredible trek was celebrated despite the cancellation of the 2020 Stampede Parade. This year, Masetti Leite will be back for a more boisterous celebration.

Additionally, the 2021 Stampede Parade plans to welcome a special group of honorary Parade Marshals who have been instrumental in the community through the past year and a half.

“We want to recognize the essential workers who have given so much to our community throughout the pandemic,” said President & Chairman of the Calgary Stampede Board of Directors, Steve McDonough. “From those who went to work each day at local grocery stores to ensure we had access to essential supplies, to the medical staff who have worked so tirelessly.”

Although the Stampede kickoff will look a little different this year, we can’t wait to (virtually) see what spectacles the parade has to offer in 2021.