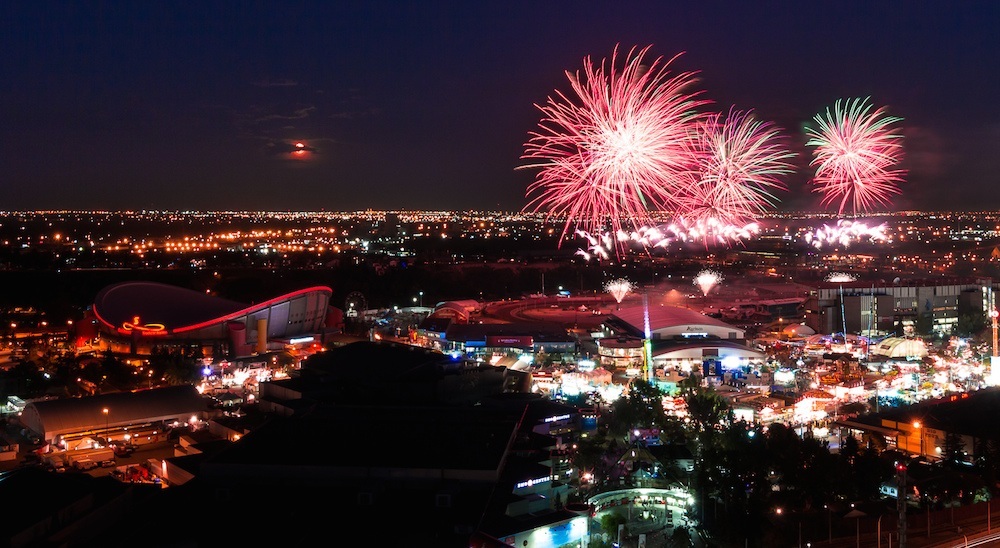 The Calgary Stampede, a 10-day international event attended by over a million people, celebrates the very core of Calgary’s Old West past while bringing the entire community together.

There’s no event like it anywhere else in the world, and as this guide points out it’s so much more than just a rodeo – to the extent that activities even spill out into city streets and the wider community, such as free pancake breakfasts (we counted 158 to be exact) and parties throughout downtown. At the Stampede Park, where the festival is held, there are exhibitions, amusement rides, dining, and nightly fireworks.

The so-called ‘Greatest Outdoor Show on Earth’, now heading into its 104th year, is held every July. This year’s event runs from Friday, July 8 to Sunday, July 17.

Where: Downtown Calgary
When: 9 am to 2 pm on Friday, July 8
Cost: Free

The festivities for the 104th annual Calgary Stampede kick off on Friday, July 8 with the epic Stampede Parade running through 29 city blocks – approximately 4.5 kilometres long – of downtown Calgary’s streets. It starts at the intersection of 6th Avenue SE and 3rd Street SE, heads west along 6th Avenue SW, turns south on 10th Street SW, before heading back east along 9th Avenue SW and finishing at the intersection of 9th Avenue and 4th Street SE.

Over 150 western-themed entires are featured in the parade, including 30 marching bands, 40 floats, 750 horses, and 4,000 people. An estimated 350,000 people are expected to line the streets to watch the spectacle.

The parade starts at 9 am and ends at approximately 2 pm at the end of the parade route, but there is also a Parade Prelude beginning at 8 am when clowns and mascots roam start to roam around the route to help build-up the excitement.

All events are held at the Grandstand, in front of an electric crowd of 30,000 people sitting and standing.

This year’s lineup for the Coca-Cola Stage, the largest music venue at the Calgary Stampede, is chart-topping and award-winning.

If you’re looking for thrills and things that will make you gasp, the rides at the Midway aren’t the only Stampede attraction that will provide you with that kick. The Peking Acrobats, a touring Beijing-based acrobatic and contortionist group, features performers that juggle tables with their feet and climb to the roof on a stack of chairs that are only balanced by glass bottles on top of a table.

Another show for the adrenaline junkies: The Bell Adrenaline Ranch returns with gravity-defying tricks and heart-stopping stunts, all performed by some of the world’s best extreme athletes, including X-Games medalists, led by Evolution of Extreme. In previous years, this event has included sensational water sports and extreme motorsports.

Ten aspiring artists will go head-to-head in their pursuit of $10,000+ worth of awards and an opportunity to jump start their country music career. The judges will select their top six during the preliminaries show, and these contestants will then get another opportunity to perform two songs during the finals.

This is where Calgary’s music stars are born. Some of the nation’s best young amateur performers will compete by singing, acting, dancing, and performing for a shot on landing on the $10,000 grand prize.

The Stampede’s Indian Village is one of the annual event’s oldest and most respected traditions as it recreates the life of the aboriginal communities that were once in the area. The entire exhibition of teepees is set-up by the Tribes of Treaty 7. However, for this year, the Indian Village will have a new home at Enmax Park across the Elbow River near the Saddledome – a new site at a new green space that is two and a half times larger than the old location the attraction usually sits on.

In the midst of all the western cowboy fanfare, the International Pavilion provides the Stampede with a flair of the world through music, performances, cultural displays, food and drinks.

An International Food Market on the lower floor features 15 different cuisines, operated by local vendors, such as Southern BBQ, Chinese, Mexican, and English delicacies. A craft beer festival, known as The Big Four Station, showcases a lineup of 20 import and domestic beers plus 20 globally-inspired flavours of chicken wings.

Additionally, the pavilion also houses an International Street Market and a community stage for various cultures and local groups to perform.

Throughout the Stampede, the BMO Centre will be transformed into a hub for local music, arts, crafts, and food and wine selections. It earns its name the “Western Oasis” not just for its entertainment and dining offerings but also its impressive themed decor of lush greenery and water features to create a peaceful sanctuary from the hustle and noise outside.

There are over 2,000 soft lights, trickling water and nature-like scents, 1,600 flowers and shrubs, and dozens of trees.

Nice break from the hustle and bustle of the grounds! #WesternOasis #CalgaryStampede #Stampede #yyc

Embrace your inner child while trying hard to keep the Oreo Funnel Cake in your stomach. The Midway returns to Stampede this year with a new 45-foot-tall rotating claw ride aptly named “Spin Out”.

Other favourites will also return, such as Crazy Mouse, Outlaw, Giant Wheel, Polar Express, Wave Swinger, Mach 3, and Spin Out, along with a number of carnival-style games and activities.

Where: BMO Centre, Stampede Park
When: Daily from July 7 to 17
Cost: Ticketed

Calgary’s The Locked Room will set-up a mobile escape room called the ‘Wild West Jail’ where teams of up to eight people will have 10 minutes to find their way out of the jail-themed room. The whole experience will take about 15 minutes, including a five-minute debriefing period before and after the locked room experience.

Where: Located next to the Corona Zone
When: Daily from July 7 to 17
Cost: Ticketed

Paint balling, climbing walls, and axe throwing will be taking over the Calgary Stampede’s Adventure Park this year. Don’t miss out on your chance to show off your competitive side while challenging friends, family and strangers in physical activities.

It wouldn’t be the Calgary Stampede without its wide selection of crazy, over-the-top eats (think: deep fried anything on a stick).

Ensure that you come to the Stampede hungry, these photos of the food offerings will show you why.

Aside from the Midway, there’s also the Triple B with five new Canadian BBQ vendors and Clubhouse Rustic Chicken as well as the aforementioned International Food Market, Western Oasis Wine Garden, and Corona Zone.