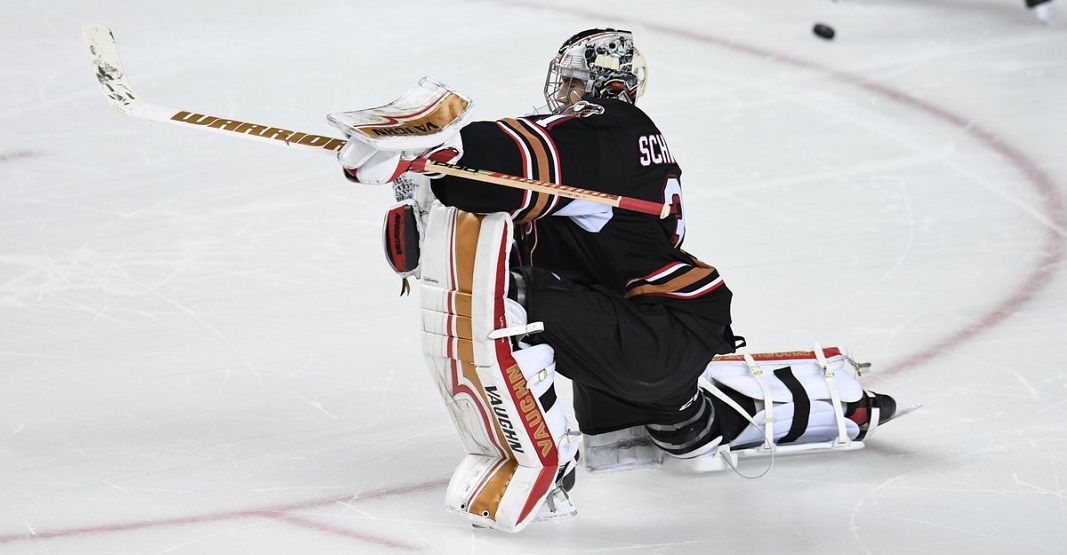 The 2017-18 Calgary Hitmen season is nearly finished and it’s been a busy one for goalies Nick Schneider and Matthew Armitage.

That is particularly true for Schneider, the starting goalie who has broken the Hitmen record for most saves in a season. He’s made 1596 saves with games still left in this season.

That’s a lot of saves, which made narrowing it down to five for this list no easy task. With plenty of spectacular saves to choose from, only the best five made the cut.

Here are the top five saves (in no particular order) from Hitmen goaltenders this season:

Starting off the countdown is a big breakaway save by Schneider.

Gary Haden tries a backhand move but Schneider was having none of it, gliding to his left and getting the blocker out for the denial.

Armitage has made his fair share of quality saves in 16 games played with the Hitmen this season.

The 18-year-old Calgary native gets the blocker out sliding to his right on this one to deny what looks like a sure goal for the Seattle Thunderbirds.

3. Coming up big with the glove

Schneider is part of a small percentage of goalies that catch with their right hand, and he used that to his advantage on this save.

After making a pad save on the left post, the rebound goes to David Kope of the Edmonton Oil Kings. He thinks he has an easy backhand into the net but Schneider gets across to rob him with the glove!

Medicine Hat Tigers captain Mark Rassell somehow has all sorts of time to pull out the dangles on this one, but Schneider doesn’t budge.

It’s a spectacular right pad save, and one his defencemen should probably thank him for.

In at the top spot is a save Schneider made in one of the first games of the season.

The Everett Silvertips pass the puck across the crease to Matt Fonteyne, who wastes no time getting the puck on net but somehow Schneider gets across and reaches out with his glove to snare the puck.