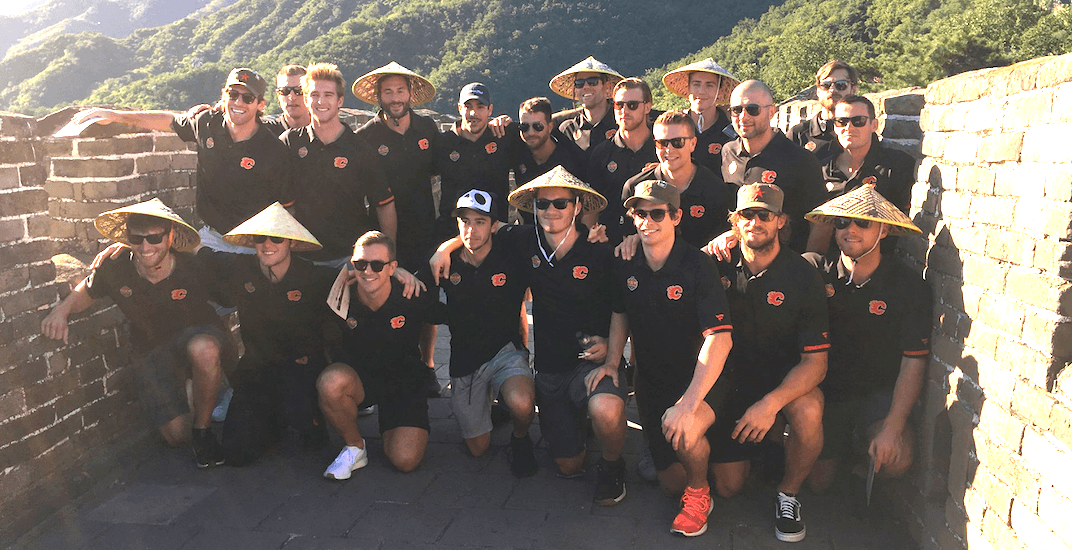 It’s a preseason like no other for the Calgary Flames.

While a split squad prepares for games in North America, most of the players that will make up the 2018-19 team are in China for a pair of games against the Boston Bruins.

The Flames rallied to force overtime after trailing 3-0 in Saturday’s game in Shenzhen, eventually losing in a shootout. The two teams don’t play again until Wednesday in Beijing, allowing the Flames a chance to see the Great Wall of China on Sunday.

A wonderful team-bonding experience, players soaked in the sights – one they probably never thought they’d get with a hockey team.

“You can’t even put it into words,” Flames captain Mark Giordano told NHL.com. “It’s a surreal experience to be up here. Just to think about what it took to build this, the history we’re standing on right now, it’s pretty cool. I think it’s a great thing we came here as a team and experienced it together.”

Here are a few of the best photos and videos of the Flames coming out of China so far:

"We're here in the square. It has one of those square shapes."

The 'Dream Team' ft. Mikael Backlund and @GarnetHathaway take you on a tour of some famous Beijing landmarks! pic.twitter.com/gs90NzgAho

Today's #NHLChinaGames adventure? A trip to the Great Wall! pic.twitter.com/nj6bR8ZsEg

"Welcome to China!"@TKACHUKycheese_ gets mic'd up and takes you behind the scenes at the #Flames' visit to the Great Wall! pic.twitter.com/AMl8kwsSm1

A goalie and a goal scorer around a Hall of Famer. Mike Smith, Lanny McDonald and James Neal. pic.twitter.com/nZvegLDJSn

Flames on the Great Wall of China. Unreal experience. pic.twitter.com/MRjvq3ea6L

Mark Jankowski and Matthew Tkachuk after a visit to the Great Wall. pic.twitter.com/a8nMLjjonQ

A photo 20 years in the making.@GarnetHathaway recreated his family photo on the Great Wall today! pic.twitter.com/ltXrkglleP

"It's a great opportunity to come together."#Flames legend Lanny McDonald checks in with his thoughts on the #NHLChinaGames, and how the guys are using it to their benefit! pic.twitter.com/AtNmCWWwOp

"It was one of the cooler moments of my life."@wongwaichung catches up with the guys to talk about their visit to the Great Wall in the latest edition of #Flames TV Chinese! pic.twitter.com/FdLaU54aq5