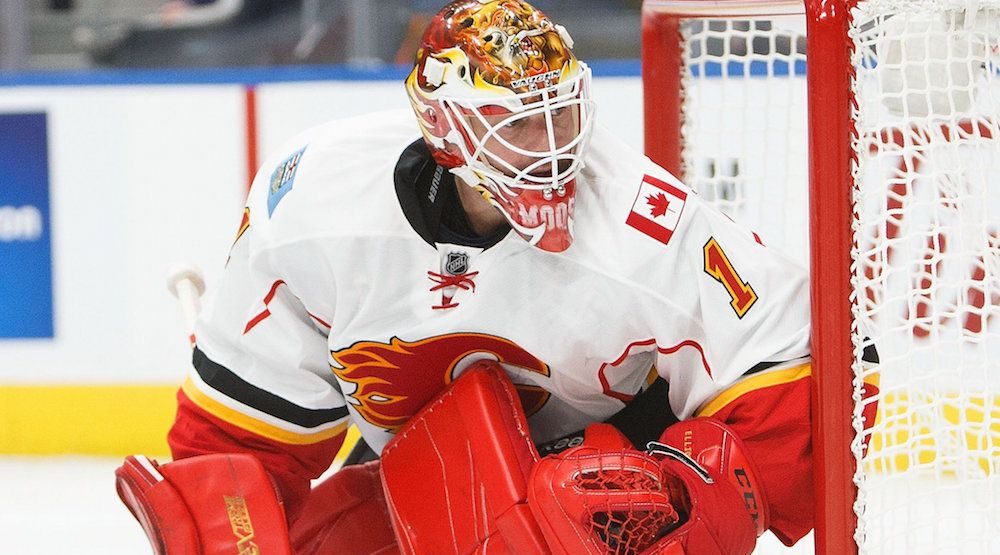 A pattern has emerged for the Calgary Flames over the course of their time in Alberta, a juxtaposition between all-star calibre netminding and goaltenders who are meant to be stop gaps between franchise stars.

For the ever steady years of Mike Vernon and Miikka Kiprusoff, the Flames have also had to rely on guys like Trevor Kidd, Fred Brathwaite, and Karri Ramo over the years to fill the void between the pipes.

Now that’s not to say the Flames were mistaken to run with those players, but solid, consistent netminding has been a rare commodity in the Stampede City.

That brings us to Brian Elliott, the man the Calgary Flames had hoped would give them enough stability in net to make a push for the playoffs in 2016-17.

A quarter of the way through the season, Elliott is looking like one of the biggest offseason acquisition disappointments in the NHL and the Flames are sitting just three points up on last place in the Western Conference.

While Elliott has not looked like his usual self in Calgary, perhaps it’s time we stop blaming the goalie and shine the light in another direction. Perhaps it’s the Flames defensive system that might have to do more with his early season struggles.

Following Kiprusoff’s retirement in 2013, the Flames rotated through a number of goalies including Ramo, Joey MacDonald, Reto Berra, Jonas Hiller, Joni Ortio, and Nicklas Backstrom before settling with this year’s tandem of Elliott and Chad Johnson.

None of these goaltenders have had the luxury that Kiprusoff earned of a secure number one job, as the ‘win and you’re in’ method has ruled in Calgary over the last three years.

A big reason why there has been such uncertainty in the Flames since 2013 have been the methods Bob Hartley and now Glen Gulutzan have used behind the bench.

Both have shown to be offensive-minded coaches, focusing on finding the back of the net enough to counteract whatever scoring chances the opposition would eventually find. Even in the Flames surprise playoff season of 2014-15, the team became famous around the league for their third period comebacks and rallying from deficits.

Despite having big name defencemen currently on the roster like Mark Giordano, TJ Brodie, Dougie Hamilton, and Dennis Wideman, none of those four are well known for their sturdy play in their own end of the ice.

"We haven't been playing good enough in front of him." – Dennis Wideman on Brian Elliott

Although not the most telling stat in the world, plus-minus has been a point of concern with Brodie, at a woeful -14 and Hamilton slightly better at -3.

Too many times this season has this experienced group of defenders let attacking forwards waltz into the slot for easy scoring opportunities, which has cost Calgary precious games over the first six weeks of the season.

This doesn’t mean the Flames defensive miscues absolve Elliott for his first 13 games of the year, as he has not performed up to his or management’s expectations.

Starting the season with a brutal 3-9-1 record, 3.31 goals against, and .885 save percentage (42nd in NHL), it’s easy to see the regression in Elliott’s game. Leading the league last year with a .930 save percentage, Elliott hasn’t looked as comfortable as the number one option for the Flames.

Playing 335 career NHL games it’s probably unfair to say he isn’t ready for a heavy workload in a season, but remember that Elliott hasn’t hit the ice for more than 55 games in a season in his career.

Elliott has also always been a goalie who’s had his starting job in doubt, whether that be from Alex Auld and Pascal Leclaire in Ottawa, or Jaroslav Halak and Jake Allen in St. Louis. That has allowed the Newmarket, Ontario native to split games and step up in big game situations when called up.

And, he might have to continue splitting games or watch from the bench while his perceived backup continues to hold down the Flames crease.

Since taking over the @NHLFlames net, Chad Johnson is 5-1-0 with only seven goals against and two shutouts. pic.twitter.com/h7fnuKV7mW

Chad Johnson has surpassed expectations in his short time as a Calgary Flame, taking over the net from Elliott and guiding the team to a winning record over the second half of November.

Johnson has been a real calming presence between the pipes for Calgary as of late and has served as a pillar for the Flames defencemen to lean on when they’ve faltered.

Putting up numbers that many expected from Elliott at the beginning of the season, the question is already being asked if Johnson should be the Flames go-to tender for the remainder of the season.

While still early in the campaign, I expect the Flames the ride Johnson until he gives them a reason to move back to a tandem system with himself and Elliott.

With a 25-save performance against the Islanders in a 2-1 overtime loss on Monday, Elliott has shown flashes of his previous work, while Johnson has provided evidence that last year’s 22-win season with Buffalo wasn’t a fluke.

Even though it likely wasn’t the initial plan from Flames brass when they brought in Elliott from the Blues, reverting back to the tandem system might be the way to go for the remainder of the year.

Much like last fall, a slow start will be tough to overcome for Calgary, but not impossible.

If Johnson is able to keep up his stellar play through December and into the new year and Elliott irons out the wrinkles in his game, the Flames could see their crease stabilize in time for the playoff push.