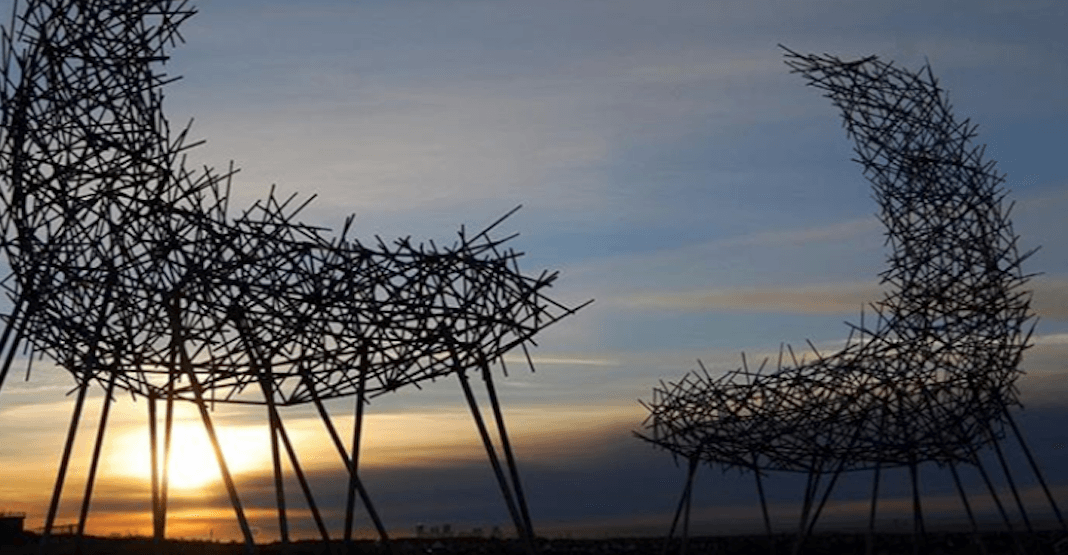 One of Calgary’s newest pieces of public art has been under fire from a vocal part of the community.

Going under the working name “Ascend” until an official name is chosen (with the help of Calgarians), the mirrored sculptures sitting atop a hill near the Shane Homes YMCA in Rocky Ridge are the creation of artist team Haddad | Drugan, aka Laura Haddad and Tom Drugan.

Built out of stainless steel tubes, the 50-foot-tall sculptures were inspired by elk, bison, nests, horns, prairie vegetation, and mythical creatures, according to an Instagram post from Haddad | Drugan.

Thanks to our amazing Canadian installation team, we are finally done in Calgary. The sculpture is located above a recreation center in a natural grassland at one the highest points in the city, with panoramic views out to both the Rocky Mountains and downtown. The art is inspired by bison, elk, horns, nests, prairie vegetation, and mythical creatures. The positioning of the sculptures in relation to one another creates compositional changes as the two forms combine and separate as you move around or between them. #calgarypublicart #bigsculpture #fiveyearsinthemaking

Some Calgarians have voiced their disdain for the new artwork, with many arguing that the $911,000 price tag was too large a price to pay for the sculptures.

Others see the artwork as a positive addition to the skyline around the new Rocky Ridge YMCA, and have pointed out that the large amount of money put into the artwork is the result of the city’s Public Art Policy, which ensures that a certain percentage of capital budget projects will go towards public art in the area.

Due to the Shane Homes YMCA coming in at roughly $192 million, the funding for public art came in at just under $1.5 million. Nearly one-third of that went towards the nearby Flock art installation, and the remained was used on the twinned sculptures.

It should also be noted that public art in Calgary isn’t chosen by the City Council, but instead by a public art committee made up of art consultants, art historians, and citizens at large who are chosen by council for limited terms — meaning that any Calgarian has a chance at joining the committee to have their voices heard on an administrative level.

Here’s what people have been saying about Ascend:

Dare I say the newest public art project in Calgary is actually….cool?

Unnecessary expense in this economy? Yes.
Should have been from a local artist? Yes.
Could have had a voting process? Yes.

…at least cooler looking than some of our other public art? Yes.
– @KrysonCJAY pic.twitter.com/ihWKpkFJCS

$911,000 for this…. it’s no blue ring but come on now… Calgary needs to do better with its public art choices. pic.twitter.com/UHwDZojBKa

Is there some sort of bylaw that stipulates Calgary is not allowed to have nice public art? pic.twitter.com/W1GeQ0IxlG

Definitely a nice piece from an art standpoint

I got some birds in my backyard that would make that for free.

I wish they’d do more public consulting before deciding on what art they’re going to commission. And I wish they’d keep it closer to the core, so that we can all enjoy it. I’m gonna pay for this and I’m never gonna see it. 🙄

It’s cool looking and way cheaper than the olympics.